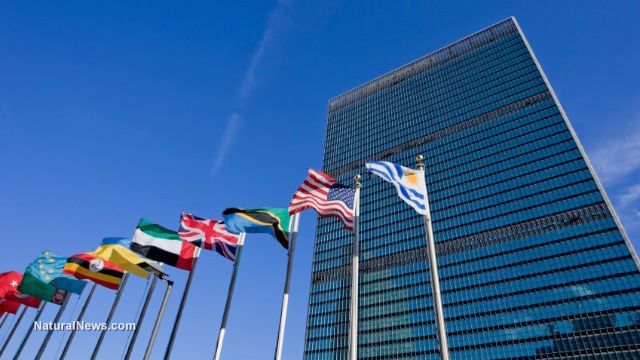 Reports in late January said that President Donald J. Trump was considering executive action that would dramatically reduce U.S. contributions – financial and otherwise – to the United Nations, which would be a significant blow, considering American taxpayers foot 25 percent of the UN’s annual budget.

The Daily Wire reported that the order may call for a funding decrease overall of at least 40 percent, adding that Trump is not at all pleased with the UN’s (or the Obama administration’s) treatment of Israel:

“The move comes a month after the UN Security Council’s egregious anti-Israel resolution, labeling the Old City of Jerusalem, the Western Wall, and the Jewish Quarter illegally occupied territory.”

There is more behind Trump’s move to decrease overall UN funding besides just Israel; the 45th president is also seeking to reign in out-of-control federal spending, and while any effort by him to cut back on finances for the global organization will be portrayed as selfish and uncaring, the fact is that Obama left Trump with a $20 trillion national debt that he doubled over his two terms in office. (RELATED: See why the mainstream media is not reporting on the upcoming economic upheaval at Collapse.news)

And Trump is none too pleased with the UN’s blatant anti-Americanism; whenever the globalist organization needs something, it runs to Washington, but whenever it makes policy, it almost always contravenes the U.S. Constitution.

Now, the UN has been caught developing lesson plans for children that portray all firearms in a negative light, and is decidedly anti-Second Amendment. As reported by The New American:

“The United Nations (UN) is offering lesson plans for teaching American and Canadian children about the benefits of civilian disarmament and to familarize (sic) them with ‘the process by which the international community, regional organizations, and the UN encourage the practice of disarmament.'”

The six lesson plans, titled “Disarmament Education Programme: A World Without Weapons” were developed by the United Nations Association in Canada. They serve as little more than indoctrination into acceptance not only of disarmament – which historically has led to authoritarianism and enslavement – but also global governance.

Besides being incredibly naïve, such lesson plans interfere, intentionally, with the constitutional framework of America; Canadians are accustomed to being disarmed, but Americans are not, and it doesn’t really matter what anyone else thinks about it – we have the right to keep and bear arms.

But since the UN is not a real sovereign body and has little authority over the United States outside of legitimate, Senate-approved treaties, it cannot impose its anti-gun agenda on our country. So schemers there have decided to do what the liberal Left-wing education industry in the U.S. has been doing for decades: indoctrinating school-aged children early and often to accept certain narratives, even if they’re phony (like so-called “global warming”) or not in their best interests as young Americans (anti-Second Amendment curriculum). (RELATED: Lies dispelled and phony narratives revealed – find out at Hoax.news)

For example, as The New American notes in revealing the content of the lesson plans:

“During the second class period devoted to Lesson One, kids are instructed that in order to end the violence, they must cooperate in ‘creating a culture of change at local, national, and global levels.’ They must begin immediately to ‘analyze cultural messages and the prevalence of armament in our society’ so that they may begin to identify allies who will join them in ‘working toward disarmament.'”

Then the propaganda really gets bad. Kids are instructed to “analyze the rationale for gun ownership,” and afterward pick out “successes and challenges in the campaign to ban small arms and light weapons.”

Obviously, that does not comport with our Constitution and, once they get old enough, their right to own a firearm if they so choose.

Our founders were not perfect men. They anguished over issues like slavery and women’s rights, devising the most perfect document they could given the times, the demands of various factions and the differences among states. The main thing to understand about them, however, is that they wanted to create a governing document that recognized that all human beings have certain inalienable rights, and included the process for changing and adapting as times changed (the amendment process, for instance, and Congress’ ability to legislate).

The inherent right to self-defense and the right to stand as a free people against government tyranny necessitated the need for personal firearms ownership. Here’s hoping President Trump follows through on decreasing aid to the UN and thereby preventing it from infecting the minds of our children with the inclinations of sheep.