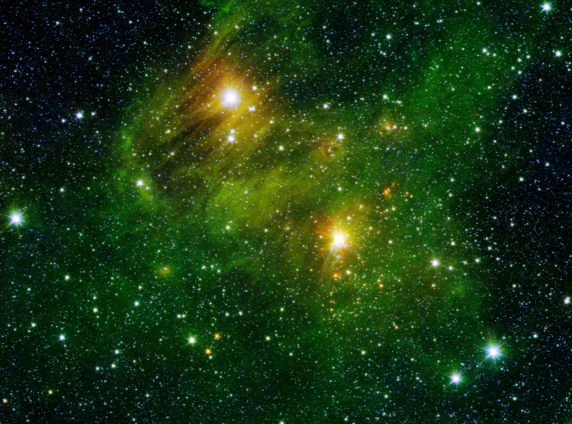 Armed with data collected by NASA’s Chandra satellite, a group of researchers at the Yale Center for Astronomy and Astrophysics in Connecticut believe they have new evidence to support the existence of dark matter – a mysterious unseen substance theorized to comprise more than 80 percent of the entire universe.

Although dark matter reflects no light, its presence is revealed through its gravitational influence on stars within galaxies such as our own Milky Way.

By analyzing the energy spectrum of X-rays emanating from the Milky Way that were gathered by the Chandra satellite, scientists were able to detect a tell-tale amount of X-ray photons displaying a particular energy within a specific spectrum range. These signals are consistent with current theory regarding how dark matter manifests itself and can be interpreted as evidence of its existence.

From The Daily Galaxy:

“This is not the first time that scientists have seen extra photons with an energy of about 3,500 electronvolts (3.5 keV) in the spectra recorded by X-ray satellites.

“The researchers found that the strength of their 3.5 keV signal was consistent with data from NASA’s X-ray satellite, the Nuclear Spectroscopic Telescope Array (NuStar). With no obvious interference within the satellite itself, the researchers concluded that the signal is unlikely to be caused by instrumental noise.”

Until now, it was unclear whether the anomalous “line” created by the photons in an otherwise smooth spectrum was merely a “statistical fluke” caused by an instrumental malfunction, or actual evidence of the decay of dark matter.

There are competing theories as to the cause of mysterious gamma rays emanating from the Milky Way galaxy:

“The so-called weakly-interacting massive particles (WIMPs) are believed by some researchers to be responsible for unusual emissions of gamma rays seen coming from the center of the Milky Way. While others think sources such as pulsars are probably the cause.”

To determine whether the gamma ray emissions were associated with the presence of dark matter, scientists compared the spectra from Chandra to X-ray data originating from the center of the Milky Way galaxy, collected by the European Space Agency’s XMM-Newton satellite.

As the researchers had predicted, the signal from the XMM-Newton satellite was stronger, a finding consistent with the theory that dark matter should be densest in the galactic center where more stars are to be found.

There are other possible explanations for the anomalous signals, but at least two have been dismissed:

“The researchers also ruled out a couple of alternative astrophysical sources for the signal: photons emitted either when very large black holes suck in material from their surroundings or when ions of sulphur take electrons from hydrogen in the centre of galaxy clusters.”

Some scientists are skeptical of the new findings – there have been several other studies that failed to detect the 3.5 keV signal, and there is still the possibility that the data is the result of a fluke or that the emissions are caused by some other phenomenon.

However, the scientists involved in the research are encouraged by the fact that four different satellites have now detected the same signal.

At any rate, the Yale research team has at least added “yet another piece to the 3.5 keV puzzle,” as one researcher put it.

Once a few more of the pieces of the puzzle are in place, we may finally begin to unravel one of the biggest mysteries in the field of astrophysics.