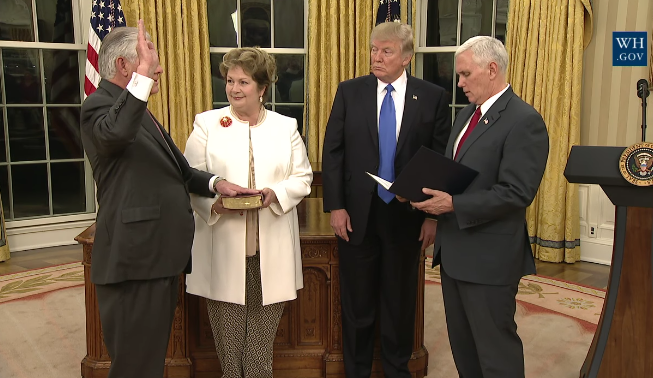 Donald J. Trump was criticized early and often during his presidential campaign for being a political neophyte with no governing experience. His retort most often was that career politicians are the ones who got us into many of our current messes.

That included a net loss of millions of jobs that were shipped out of the country since the signing of the North American Free Trade Agreement more than 20 years ago, along with subsequent “free trade” agreements since. Trump often criticized American leaders present and past for making “really bad deals” that hurt Americans of all socioeconomic classes.

It was a message that resonated among a majority of the electorate, handing Trump victories in historically blue or blue-leaning states like Wisconsin, Michigan, Pennsylvania and Ohio. And now, just a few weeks into his presidency, Americans trust him – not big government careerists in the federal bureaucracy and in the political class – to repair our country’s flagging economic growth.

According to The Hill, Americans have the most confidence in our economy now than they have in years, and they are crediting the president with their optimism. (RELATED: Americans Elected Trump To “Drain The Swamp” – Well, This Is What It Looks Like, And The Establishment Doesn’t Like It)

Among Republicans surveyed in the Harvard-Harris poll, 60 percent are satisfied with the economic trajectory, versus 23 percent who are dissatisfied. Only 33 percent of Democrats said the economy is on the right track, while 48 percent said it is headed in the wrong direction.

At 65 percent, Trump voters are the likeliest to say the economy is headed in the right direction.

“It’s really a surprising turnaround given how negative voters have been about the economy since 2009,” said Mark Penn, co-director of the Harvard-Harris poll, as reported by The Hill. “But jobs remains the number one issue and a lot of the change in sentiment anticipates tax cuts and infrastructure programs.”

There is more ancillary evidence that the country believes in Trump: The stock market has been on a markedly upward trend, reaching new records, since his Nov. 8 victory. Also, the economy added 227,000 jobs in January, far better than the 175,000 most economists predicted.

Trump and the GOP Congress still have a long way to go to match the job growth of the 1980s under Ronald Reagan, when the economy was growing an average of 3.5 percent (it grew an average of 3.9 percent under Bill Clinton – and a Republican-controlled House, where spending and tax legislation begin).

But clearly, the country is more confident in Trump than it ever was under Obama, who regularly blamed his poorly-performing economy on his predecessor, George W. Bush. And while Obama did, in fact, inherit a financial mess, his policies of heavy regulation did little to spur growth over his eight years in office. In fact, his was the first presidency in the modern era that did not achieve 3 percent growth even in a single quarter.

What is driving Americans’ confidence? Several things. First, Trump has already managed to save at least some U.S. jobs from being outsourced to Mexico and beyond. Secondly, Trump’s entire domestic policy platform is focused on jobs and economic growth. Third, Trump has pledged to dramatically cut back regulations on both small businesses and large industries, which will save companies money and spur expansion. And fourth, Trump (and the GOP Congress) wants to reduce tax burdens on corporations (taxed at 35 percent, the highest in the industrialized world) as well as American families. (RELATED: WINNING: IRS Won’t Enforce Obamacare Penalty For Uninsured)

All of these policies in the past, when they have been put in place, have led to virtually unrestrained economic growth. They will again if Trump and Republicans can enact them.

And obviously, most Americans believe they can.