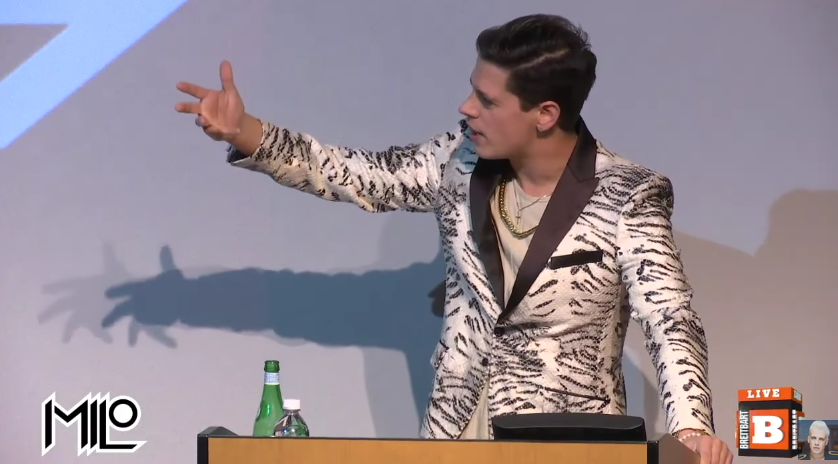 The current furor over Breitbart News Technology Editor and conservative firebrand Milo Yiannopoulos’ previous statements about man-boy relations that appear to condone pedophilia were very likely part of an ongoing smear campaign by anti-Trump organizations and the establishment media to tar public figures who support the president. (Related: Keep up with latest from our president at Trump.news.)

That’s the only way to explain a bizarre series of events that have unfolded over the course of a few weeks ahead of the release of a video in which Yiannopoulos appears to make pro-pedophilia statements by a previously little-known conservative blog called the Reagan Battalion. (RELATED: How To Beat Facebook Censorship And Stay Connected With Suppressed News Sources)

— In 2015, the far-Left journal Salon actually gave a platform to a self-professed pedophile – a man by the name of Todd Nickerson. A series of articles, beginning with, “I’m a pedophile, but not a monster,” allowing him to spew his poison, began in September 2015. His pieces were followed by other powder-puff pieces by other Salon writers. You can see these articles archived: I’m a pedophile but not a monster, I’m a pedophile; you’re the monsters, I’m not a monster, The pedophile I could not help, and Pedophiles who mean well, as listed in this Reddit post. The New York Times also gave a platform to Margo Kaplan in 2014, who argued that pedophilia is just a “disorder, not a crime.”

The Salon articles have all been taken down. The Times article remains.

What’s interesting is that Milo attacked the initial Salon piece at Breitbart, noting that it and others were “just the latest in a disturbing trend of pedophilia activism on the Left, which has gone out on a limb time and time again to normalize child abuse. From the 1970s to the present day, organized pedophilia has been a recurring problem for the supposedly progressive movement.”

— This tweet contains a screenshot of an anonymous poster to 4chan, who – the day before the proverbial stuff hit the fan for Milo – wrote that an operation to take him out was set to “go live”:

FYI the MSM (Mainstream Media) has a huge f**king media onslaught that is set to go live Monday to score earth Milo and destroy him via the pedophile label. I’m part of a mailing list (not giving my real name or the name of the list for the sake of protecting my a** from retaliation) but they have been sitting on the story for a while, because they thought Milo was small fries and wanted to wait until he got big enough a threat to go nuclear on.

The journalists are pi**ed the f**k off (HBO “Real Time” host Bill Maher put him on the air and more so, pi**ed off his book deal had not been revoked (it has now)…

There are also those who want to hurt him simply as a proxy to hurt Steve Bannon/Breitbart since their attempts to attack Bannon have largely failed. Not to mention people on the left being pi**ed off that most people sided with Milo over the (UC Berkeley) rioters. Rioters, that were paid for by Soros through a variety of fronts and laundered through companies that can’t be traced back to him…

Expect a steady drumbeat of “Milo is a pedophile” and “Milo must be dropped from CPAC” (he has been). The later (sic) is especially important, in terms of divide and conquer long game the press is playing: the press wants a civil war with the McCain/Graham wing of the GOP and the Trump/Ryan wing so as to weaken the Republicans in 2018. The overall plan is to make the Republicans fear social shaming from the media and the Left more than their actual constituents who love Trump, in hopes of regaining the House and enough Senate seats to pull off an impeachment of Trump.

— All of this comes on the heels of anonymous threats against Natural News founder/editor Mike Adams, the Health Ranger. If he does not cooperate in taking down Infowars’ founder and creator Alex Jones, a staunch Trump supporter (so is Adams), his reputation will be destroyed by the mainstream media. Mike wrote about this, and what is going on presently with Milo, earlier this week at Trump.news. (RELATED: When Trump Says The Mainstream Media Is America’s Greatest Enemy, We Should Believe Him)

— Finally, as I reported at MediaFactWatch, the Alt-Left group Media Matters has assembled a war chest of $13.4 million and a staff of 34 to perform “opposition research” on conservative media figures who are supportive of Trump. While it’s not yet known if the opposition research used to take down Milo came from Media Matters’ operation, that is precisely the kind of work those people will be doing.

Without condoning anything Milo has done or said, the fact is it’s become obvious the Left is waging a covert war to destroy the reputation of public figures who are staunch supporters of the president and his America-first agenda. Expect more “opposition research” attacks in the months and weeks ahead. (Related: Stay informed at Conservative.news.)