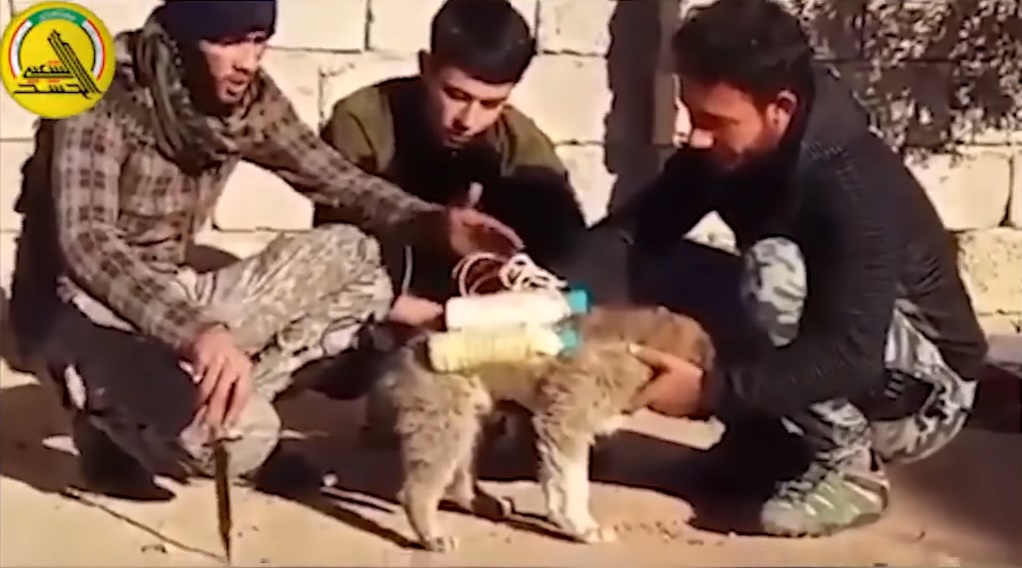 Small animals, like small children, get caught up in war zones. Iraqi families who live in Mosul continue to be battered, threatened, and killed. It’s not the U.S. military doing the damage now, although their crimes across the nation including Mosul during the Bush/Cheney war were violent and rarely documented. As the Iraqis and their allies continue to battle the brutal terror of the Islamic State (ISIS/ISIL), says Breitbart, they have come up against even more desperate and depraved tactics being used against them. One includes the strapping of suicide bomb devices to the backs of puppies.

The men in this video are NOT the murderers who turned this innocent puppy into a suicide machine. They are said to be members of the “Shiite Popular Mobilization Forces (PMF),” which is an Iranian linked group fighting ISIS, and an ally to Iraq. They are asking the question, “What sin did this dog commit?” It is reported that the package of bombs on the puppy’s back was defused before it detonated. Keep in mind that Breitbart also reported they were “unable to verify the authenticity of the video.”

Even though the video cannot be fully vetted, there have been additional reports declaring that ISIS regularly employs a wide variety of tools to deliver death and destruction. Most are familiar with human suicide bombers and land mines, but the nations who support ISIS have also supplied them with weaponized drones and “decoy military equipment.” ISIS also uses camouflage-dressed mannequins as explosive devices. In addition to puppies, sheep have also been used as a delivery method. Local observers have surmised that the use of these booby-trapped animals may be a sign of desperation and loss of combat strength.

The depravity of ISIS continues to reach new lows. Not that the beheading of innocent children, the raping of women, and the slaughter of innocents aren’t crimes of unimaginable depths. Whomever is behind the funding of these murderers, and the blood money is shared by many parties interested in mass mayhem and destruction, may they be discovered in their completeness and complexity and be dealt with according to the eternal laws of justice.

A collective thanks to President Trump for naming ISIS as an enemy of all mankind and for not only having the desire to protect the borders of America, but the gumption and wherewithal to get the job done.