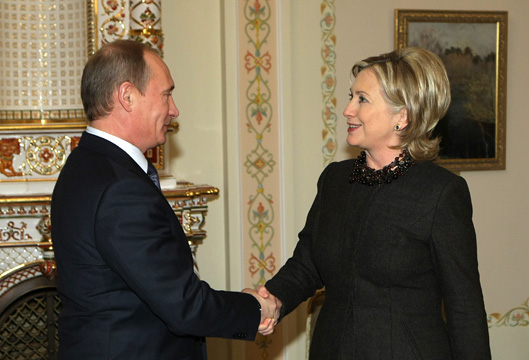 Given the establishment media’s focus on the “scandal” surrounding President Donald Trump and his administration’s contact with Russian officials, it is worth reminding Americans of the revelations involving Hillary Clinton and the Kremlin.

1. Hillary Clinton approved the transfer of 20 percent of U.S. uranium to Russia and nine investors in the deal funneled $145 million to the Clinton Foundation.

While Hillary Clinton’s State Department was one of eight agencies to review and sign off on the transfer of 20 percent of U.S. uranium to Russia — then-Secretary of State Clinton herself was the only agency head whose family foundation received $145 million in donations from multiple people connected to the uranium deal, as reported by the New York Times.

2. Bill Clinton bagged $500,000 for a Moscow speech paid for by a Kremlin-backed bank while Hillary Clinton was Secretary of State.

Former President Bill Clinton delivered a speech in Moscow and received a $500,000 speaking fee from a Russian government-connected bank, while his wife’s State Department was getting ready to sign off on the transfer of 20 percent of U.S. uranium to Russia.

“And, in one case, a Russian investment bank connected to the deals paid money to Bill Clinton personally, through a half-million-dollar speaker’s fee,” reported the New Yorker.

Hillary Clinton’s campaign chairman John Podesta sat on the executive board of an energy company, Joule Unlimited, which received millions from a Putin-connected Russian government fund. Podesta also owned “75,000 common shares” in Joule Unlimited, which he had transferred to a holding company called Leonidio LLC.

Podesta also failed to fully disclose his position on Joule Unlimited’s board of directors and include it in his federal financial disclosures, as required by law, before he became President Obama’s senior adviser in January 2014.