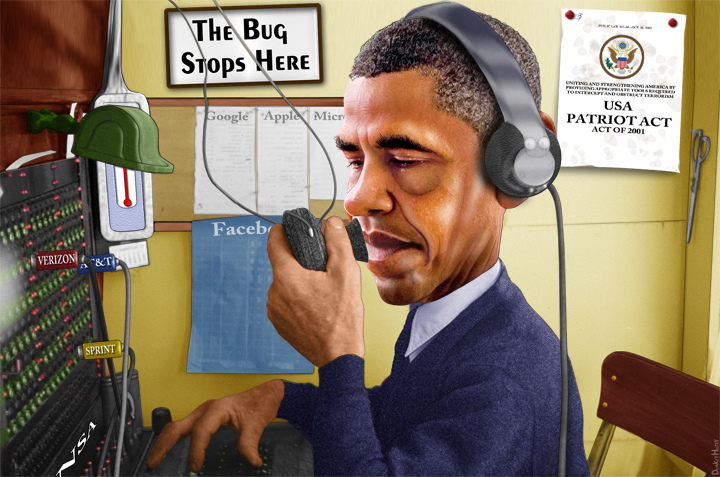 The Main Stream Media and other enemies of the current President are challenging the proposition that President Obama wire tapped President Donald Trump during the 2016 Presidential race.  President Trump started this discussion with his tweets over the weekend.

Terrible! Just found out that Obama had my “wires tapped” in Trump Tower just before the victory. Nothing found. This is McCarthyism!

Is it legal for a sitting President to be “wire tapping” a race for president prior to an election? Turned down by court earlier. A NEW LOW!

Next the President tweeted:

I’d bet a good lawyer could make a great case out of the fact that President Obama was tapping my phones in October, just prior to Election!

The final for four tweets concerning the wire tapping:

This is now being referred to as Obamagate!

It is not unfounded that former President Obama would wire tap President Trump during the election process.  This is because he has done this before.  Here is a list of individuals who were wire tapped by the Obama Administration.

* The US National Security Agency bugged a private climate change strategy meeting; between UN Secretary General Ban Ki-Moon and German Chancellor Angela Merkel in Berlin;
* Obama bugged Chief of Staff of UN High Commissioner for Refugees (UNHCR) for long term interception targetting his Swiss phone;
* Obama singled out the Director of the Rules Division of the World Trade Organisation (WTO), Johann Human, and targetted his Swiss phone for long term interception;
* Obama stole sensitive Italian diplomatic cables detailing how Israel’s Prime Minister Benjamin Netanyahu implored Italy’s Prime Minister Silvio Berlusconi to help patch up his relationship with US President Barack Obama, who was refusing to talk to Netanyahu;
* Obama intercepted top EU and Japanese trade ministers discussing their secret strategy and red lines to stop the US “extort[ing]” them at the WTO Doha arounds (the talks subsequently collapsed);
* Obama explicitly targeted five other top EU economic officials for long term interception, including their French, Austrian and Belgium phone numbers;
* Obama explicitly targetted the phones of Italy’s ambassador to NATO and other top Italian officials for long term interception; and
* Obama intercepted details of a critical private meeting between then French president Nicolas Sarkozy, Merkel and Berluscon, where the latter was told the Italian banking system was ready to “pop like a cork”.

In addition to the above list we also know now that Obama wire tapped various individuals in the US media that were reporting information not flattering to the Obama Administration.  It is widely known that Obama’s Justice Department targeted journalists with wiretaps in 2013:

* In 2013 the liberal Washington Post expressed outrage after the revelation that the Justice Department had investigated the newsgathering activities of a Fox News reporter as a potential crime in a probe of classified leaks.  The reporter, Fox News’ James Rosen and his family, were part of an investigation into government officials anonymously leaking information to journalists. Rosen was not charged but his movements and actions were tracked.
* Also in 2013, members of the Associated Press were also a target of the surveillance.  The ultra liberal New Yorker even noted that “In moderate and liberal circles, at least, the phone-records scandal, partly because it involves the dear old A.P. and partly because it raises anew the specter of Big Brother, may well present the most serious threat to Obama’s reputation.”
* Reporter Sharyl Attkisson said in 2014 that her personal computer and CBS laptop were hacked after she began filing stories about Benghazi that were unflattering to the Obama administration.  A source who checked her laptop said the hacker used spyware “proprietary to a government agency,” according to an article in the New York Post.

Update – WikiLeaks tweeted overnight that the Obama Administration spied on their journalists as well:

Did Obama spy on @realDonaldTrump‘s campaign? Here is proof the Obama administration spied on our journalists https://t.co/R1wSTtahJL pic.twitter.com/wo9vEGzSZB

Obama is no stranger to wire tapping.  His administration tapped phones and computers of friends and foe alike.