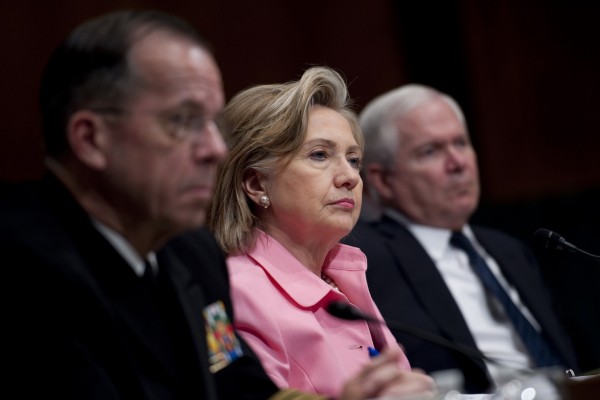 The conspiracy theories continue to swirl around Washington, D.C., that the Deep State has it in for President Donald J. Trump, and it won’t rest until he is ousted from office.

On Tuesday, Julian Assange, publisher of Wikileaks, tweeted out that Hillary Clinton said privately this month, in a venue he did not identify, that behind the scenes she is pushing for Vice President Mike Pence to be named president because, in Assange’s words, Pence is “predictable hence defeatable” in the 2020 election.

He then tweeted that two U.S. intelligence community members close to Pence said they, too, were pushing for a Pence takeover, but did not say whether or not the vice president was on board with the putsch.

As reported by The Daily Caller, Assange’s tweets appear to be in response to reports that Trump has given the CIA authority to launch drone strikes against terrorist targets – a hallmark of the Obama administration.

It was obvious that Assange disapproved of Trump’s decision, tweeting, “By handing unilateral power over to the CIA over its drone strikes at this time White House signals that bullying, disloyalty & incompetence pays,” an apparent reference to several intelligence leaks regarding the Trump administration that Assange is assigning to the nation’s top spy agency.

By handing unilateral power to the CIA over its drone strikes at this time White House signals that bullying, disloyalty & incompetence pays

The fact is, if true, this represents a greater threat to the republic than any allegedly posed by Trump himself. Regardless of what one thinks about his policies, executive actions and political priorities, he did win the election fair and square. There has been no proof that “Russia hacked the election” to “help” him, in any way that actually changed the balloting and vote-counting. The only thing that has been offered along these lines is smoke and mirrors, allegations, innuendo and supposition. No hard evidence has been provided or offered by anyone. (RELATED: Wikileaks CIA dump reveals how the Deep State can hack databases and make it SEEM like the Russians did it.)

That a group of faceless, unelected intelligence and foreign policy careerists in the Deep State could effectively run an operation to oust a duly elected sitting U.S. president is a much clearer and present danger. How, exactly, would repairing relations with Russia, which is sitting on a massive stockpile of nuclear weapons, be a bad thing for Americans?

What seems to be the modus operandi of the Deep State working against Trump is that he should not be allowed a chance to succeed – politically, policy-wise, or practically. Understand that if Trump succeeds, his policies of ending status quo Washington will necessarily devolve power away from the Deep State opposing him, and put it back in the hands of our elected officials.

So what’s ahead? Which course will evolve?

One, Trump adopts the Deep State’s foreign policy so he can focus more on his domestic agenda, which he appears to be doing already, having agreed to send U.S. troops into the meat grinder that is Syria and authorizing CIA drone strikes. While those decisions in and of themselves are not wholly inappropriate, they do appear to defer to the Deep State’s playbook. And the Syrian decision is very anti-Russia, given that Moscow has troops and planes in the war-torn country as well, backing it’s current president, Bashar al-Assad, whom we oppose. (RELATED: Peter Schweizer: Yes, Deep State is real and is a ‘threat’ to the ‘republic’.)

Two, the Deep State goes ahead with plans to unseat Trump and replace him with Pence, whom some believe is more malleable when it comes to Deep State status quo objectives. Now, how Trump is unseated is the question – 25th Amendment, impeachment, or violence. None of those options would be good for the country. Keep up with the latest developments at Conservative.news.