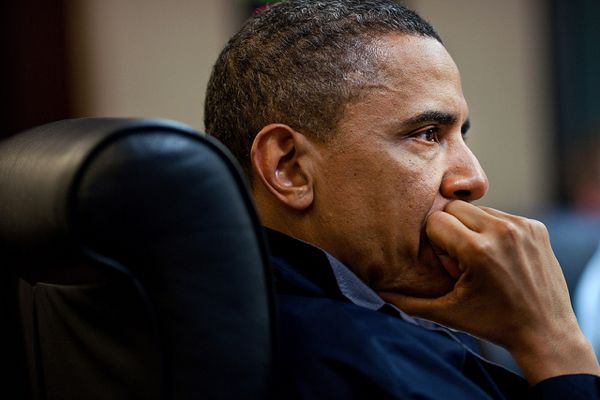 The chairman of the House Permanent Select Committee on Intelligence keeps dropping bombshells regarding what his committee is learning regarding the Obama administration’s intelligence surveillance of the Trump transition team, and he dropped another Wednesday: He told reporters he “cannot rule out” whether the former president ordered the surveillance.

New information has surfaced proving that elements of then-President-elect Donald J. Trump’s transition team, and possibly the president-elect himself, were being watched by the Obama administration. In a gaggle with reporters following this discovery, Rep. Devin Nunes, R-Calif. could not say for sure whether or not Obama himself ordered the surveillance of Team Trump.

In early March, Trump tweeted that Obama had his “wires tapped” at Trump Tower, a claim that drew immediate fire, denial and indignation from Democrats, some Republicans, and members of the former president’s intelligence community and Cabinet.

In fact, as recently as this week, FBI Director James Comey testified before Nunes’ committee that he had “no information” to substantiate the president’s tweeted allegations, which did not make sense to many observers given that previous reports claimed that an intelligence operation against Trump and his team had been launched before the Nov. 8 election. (RELATED: Flat out: Someone in government or the media is lying about ‘wiretapping’ Trump Tower story)

Indeed, Comey verified that himself during his testimony, when he took the highly unusual step of confirming, publicly, that the FBI began a counterintelligence investigation of Team Trump last July. Comey stated that the investigation was meant to determine whether there was any collusion with the Russian government to steal the election from Hillary Clinton, perhaps the worst, most corrupt presidential nominee ever.

During his press conference, Nunes – who said he had passed along his new information to the White House, where Trump said he felt “somewhat vindicated” by the news – also said some other things that are notable and extremely important.

First, he said that the information he had been provided – apparently by “sources” perhaps in the Intelligence Community “who thought we should know about it” – “alarmed” him because the Team Trump surveillance, which appeared to be legal, had nothing at all to do with the FBI’s counterterrorism investigation. That could mean it was a White House operation all along, which would additionally mean that a sitting president used the incredible power of the U.S. intelligence apparatus to conduct surveillance on a political rival presidential campaign.

The question becomes, why?

The Obama regime’s denial that Obama would or even could do such a thing – order surveillance on American citizens – never made sense, either. Shortly after Trump first tweeted his allegations, a member of Obama’s national security advisory team, Ben Rhodes, tweeted back that presidents “can’t order” such surveillance. (RELATED: Trump Says The Entire “Russia Hacked The Election” Narrative Has Been Fabricated By Democrats)

That’s simply false. 50 United States Code, Section 1802 states that “Electronic surveillance authorization without court order; certification by Attorney General; reports to Congressional committees; transmittal under seal; duties and compensation of communication common carrier; applications; jurisdiction of court.”  This makes it clear that such surveillance orders can come out of the Oval Office: “(a)(1) Notwithstanding any other law, the President, through the Attorney General, may authorize electronic surveillance without a court order under this subchapter to acquire foreign intelligence information for periods of up to one year if the Attorney General” [emphasis added] certifies certain conditions and informs congressional intelligence committees.

So, if this little ‘operation’ went through the Justice Department, then you can bet Director Comey was aware of it. But he’s been only been required to answer very specific questions about Trump’s “wiretapping” allegations, as in, is there any record of court-ordered surveillance against Trump Tower (previous reports have claimed there is a record of such surveillance, and the FBI should have it). He hasn’t been asked who ordered what, and he needs to be.