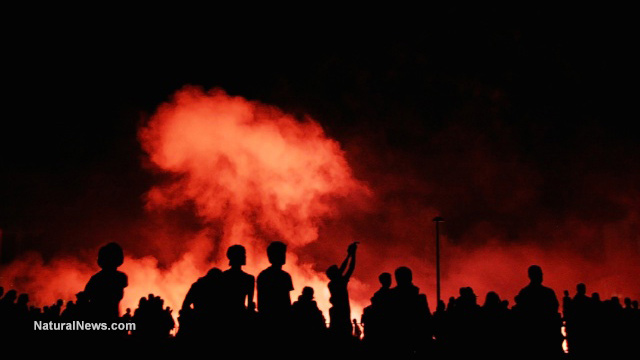 If you don’t yet realize that human society is headed for a catastrophic collapse, you’re so far behind the curve that it’s scary. Although no one knows exactly which breaking point is going to fail first, there are now so many candidates for the collapse that an apocalyptic future for humankind is all but guaranteed. Some of the candidates for catastrophic collapse include:

What will happen with things start to unravel? Mac Slavo at SHTFplan.com nails it when he says:

There will be tens of millions of starving, angry and bewildered people who face endangerment and extinction, and there will be a few who succeed not only in planning ahead, but in laying low enough to avoid being noticed and picked off by looters, marauders and misguided authorities.

But those who didn’t prepare for the worst when it did happen could very quickly lose everything they have, and many will perish during the next major crisis – which could be triggered at this point by almost anything.

I’m fully aware that everything I’m publishing today will be inaccessible to you once the stuff hits the fan. But until that day comes, you can learn a lot from knowledge published online, but only if you know which websites to visit. To no one’s surprise, all the best websites that teach real preparedness, awakening and human knowledge are systematically suppressed by Google, Facebook, Twitter and other internet totalitarian gatekeepers.

This means you need to memorize the web site names in advance — even bookmark them in your browser — so that you can find them even when Google initiates a TOTAL BAN of all “non-official” information (that day is coming, I’ve been told, so get ready).

In addition to the usual top-caliber survival websites such as SurvivalBlog.com, ReadyNutrition.com, OffTheGridNews.com and SHTFplan.com, here are five new websites that we’ve launched here at Natural News as part of our editorial expansion into preparedness, survival and “how-to” content:

Bugout.news – A specialty site focusing on how to escape the cities and suburbs during any collapse. This is a popular site because so many people live in the city but don’t want to DIE in the city, y’know?

MarketCrash.news – A very new website, with not much content yet, but it will increasingly host articles about the financial collapse, debt collapse, wisdom about buying gold and silver, and so on.

Remedies.news – An extremely valuable, lifesaving website that teaches you all about natural remedies, including herbs you can grow at home, plus natural herbal antibiotics that can, in some cases, replace chemical antibiotics.

In addition to the five primary websites mentioned above, you’ll also find value in these sites which are very narrowly focused on specific survival and preparedness topics:

Guns.news – Focuses on firearms know-how, especially for NEW gun owners. Consider this a firearms website for beginners, as it will help you choose and master the best firearms for self-defense, even if you’ve never owned a gun in your life. (You’d be amazed how many people are buying firearms for the first time now, especially across the gay community where gay gun owners are finally arming up and deciding they’re no longer going to just stand there and get shot by radical terrorists who despise gay people.)

Outbreak.news – Covers pandemics and disease outbreaks, bringing you the truth about natural remedies that the CDC won’t dare mention (and the FDA deliberately tries to suppress).

Iodine.news – This site focuses on iodine, nuclear accidents, Fukushima and nuclear fallout. If you really want to know how to protect yourself from radiation damage, this site is your go-to resource. It also covers cesium-137 and other radioactive isotopes that threaten human health.

If you get your (fake) news from CNN and MSNBC, you’re far more likely to DIE when it all comes down

There’s no way to say this other than to just state it directly: If you get your news from the fake news media — NYT, WashPo, CNN, etc. — you are far more likely to die in any catastrophic collapse.

Why? Because they will deliberately lie about what’s really happening, just like they lied about Fukushima, the Ebola outbreak and the current debt crisis which could implode at any time. The fake news media deliberately exaggerates risks that aren’t real but serve a political purpose — such as the Zika virus hoax or the Russian hacking conspiracy delusion — while downplaying the real risks that actually threaten humankind. Nearly everything reported by the fake news media is the opposite of reality.

Only the independent media works hard to tell you the truth about what’s really happening. And while the independent media still makes mistakes — Alex Jones recently broadcast a massive apology for reporting on the PizzaGate story — the “mainstream” media deliberately lies every single day and never apologizes at all. (Natural News never covered the PizzaGate story, by the way, as we could never find enough evidence to support it. Dave Hodges incorrectly stated once that Natural News did cover PizzaGate, but he was accidentally conflating the two sites. It was Alex Jones who covered the story, not Natural News.)

In other words, the independent media tries to get the story right, while the mainstream media is always trying to distort reality and LIE to the public for nefarious purposes.

The bottom line? Stay informed through the right websites, and you’ll stay alive when it really counts.