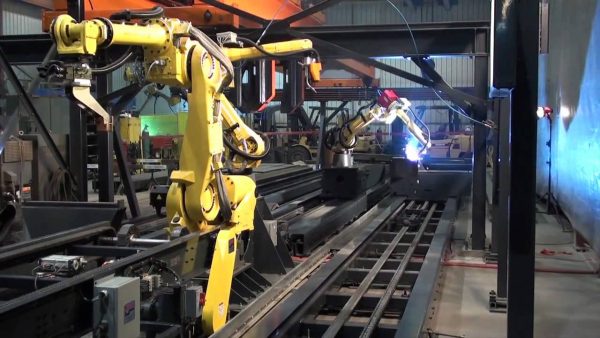 New York-based Construction Robotics has developed a bricklaying robot that can build walls six times faster than a human worker. The Semi-Automated Mason 100, nicknamed Sam, can lay up to 3,000 bricks daily compared with an average builder’s capacity of only 500 bricks a day. The robot Sam is made up of various parts including a conveyor belt, a concrete pump, and a robotic arm.

Two builders are needed to oversee the machine. The first builder feeds bricks into the robot. The machine’s nozzle covers these breaks in concrete before the robotic arm puts it in place. A second builder then smooths out the concrete before the robot places more bricks. The robot has already been deployed in construction sites in the U.S. Construction Robotics has announced that it is currently in talks with various construction companies and will bring Sam in the U.K. in the coming months. “We are going to be going over to the UK in the coming months to meet with some companies and see if we can find a home for Sam there,” says Construction Robotics president Scott Peters.

However, construction industry experts cautioned that the robot’s arrival could endanger the jobs of thousands of bricklayers in the U.K. Recent data shows that about a third of Britain’s construction workers are either middle-aged or seniors at 50 years or older. This figure accounts to around 620,000 retirees within the next decade. However, WASCO CEO Andy Sneed posted a testimonial in the company’s website, stating that the machine “doesn’t eliminate our masons at all. It simply helps them do more with less crew, while minimising [sic] the physical stress of repetitive brick-lifting motions.”

The Semi-Automated Mason is currently under fire as the construction workforce readily pointed out the robot’s limitations. The Construction Robotics’ YouTube account has been riddled with arguments about the Sam’s construction capacity.

One user posted: “Can you post a video of the robot building corners, piers, window openings? Can it adjust coursing or plumbness for screw-ups on the job or wrong steel heights?”

Another asked: “Can it set lintels and install flashing?”

A company representative confirmed that the robot has no issues with piers or window openings. The robot can be adjusted to handle plumbness. However, the representative admitted that the machine cannot handle corners.

Construction Robotics’ Semi-Automated Mason currently has a price tag of $20,000 for six units per month. The robotic machine requires heavy supervision to operate.

Australian inventor Mark Pivac developed a similar large-scale bricklaying robot in 2015. The fully-automated machine, called Hadrian, can lay up to 1,000 bricks per hour and work around the clock. Once commercially available, Hadrian is touted to build an entire shell of a building in only two days. In comparison, a human crew would require four to six weeks of manual labor to accomplish the same task.

Before laying the bricks, Hadrian examines a 3D layout of the building being constructed to calculate the location and the brick size needed for the project. Once the specifics are determined and the bricks are loaded, the robot cuts the bricks as needed and treats them with construction adhesive, which the company claims would help improve the construction speed and the structure’s overall strength and thermal efficiency.

“People have been laying bricks for about 6,000 years and ever since the industrial revolution, they have tried to automate the bricklaying process. We’re at a technological nexus where a few different technologies have got to the level where it’s now possible to do it, and that’s what we’ve done,” says Pivac.

Pivac is the founder of the Australian technology firm Fastbrick Robotics.