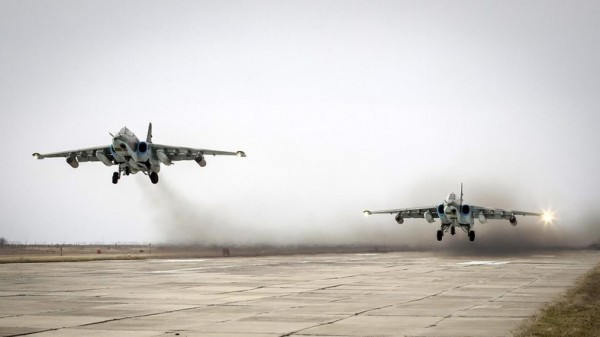 The strategy of the United States and NATO during the Cold War focused primarily on stopping a massive land attack by the Soviet Red Army as it invaded the European continent. Short of all-out nuclear war, that was the most likely scenario leading to the third world war in less than a century.

Of course, the Red Army never invaded, there was never a massive nuclear exchange between Moscow and Washington, and the Cold War ended with the dissolution of the USSR. The world breathed a sigh relief.

Who could have imagined that, a quarter of a century later, the rump state of Syria may well become the flashpoint for World War III? And yet, that’s entirely possible. (RELATED: Trump Is Not Obama: Laying Down International Law To Assad Panned By Some Supporters But Praised By Others As “Decisive”)

Last week President Donald J. Trump, in response to yet another shocking use of sarin gas by elements of the Syrian army against rebels and noncombatants, in which dozens of children were killed, ordered a massive Tomahawk cruise missile attack against the government-held airbase where the chemical attack was believed to have been launched. Over the course of several minutes – while Trump was hosting Chinese President Xi Jinping at his Mar-a-Lago resort – 59 missiles slammed into the al-Shayrat airbase, destroying as many as 20 aircraft, hardened bunkers, and ammunition and fuel storage facilities.

Following the attack, Trump warned he would order subsequent attacks against the Syrian regime if it continued to use poison gas.

Shattering once and for all the Marxist Democrat narrative that Trump and Russian President Vladimir Putin “colluded” to “steal the election” from Hillary Clinton, the White House’s action earned Trump praise from all over the world – except from Russia and its client state, Iran, both of whom have expended billions of dollars and no small amount of resources to prop up the Syrian regime of President Bashar al-Assad.

Now, Moscow and Tehran will have to figure out what their next moves will be given that Trump has officially broken from the Obama era of pacifist foreign policy, where Washington shrank from its traditional role of world leader during the previous administration. Will they double down on their support for Assad’s failing state – to protect their investment, so to speak, but also in an effort to prevent the U.S. from once again becoming the dominant force in the Middle East – or will they now seek a diplomatic solution before the situation escalates into a global conflagration?

As reported by The Wall Street Journal, the situation could go either way, but the strike most assuredly raised tensions with Iran, which has been sending Assad military support in terms of weapons, ammunition and fighters:

Many Middle East analysts said Iran could seek to mobilize even more military support for Mr. Assad in coming months. This is in addition to the thousands of Shiite fighters it has already deployed in Syria since civil war broke out in the country in 2011.

Syria serves as Iran’s closest regional ally and the land bridge for Iranian supplies going to Lebanese and Palestinian militias at war with Israel.

“The key question now is, what’s the Iranian response to the attack? Do they double down,” Andrew Tabler, a Syria expert at the Washington Institute for Near East Policy, told the WSJ. (RELATED: Will Iran, Russia double down in Syria after U.S. strike? WWIII looms)

Other experts told the paper that Tehran does not have a choice after what it has spent investing in Assad’s defense for the past six years, as the Syrian civil war has raged.

The same is true for Moscow.

“Iran and Russia have paid a high cost in Syria, both financially and in human life, and Iran has lost even more than Russia,” noted Foad Izadi, a professor at Tehran University. “Therefore, Iran will not sit back indifferent.”