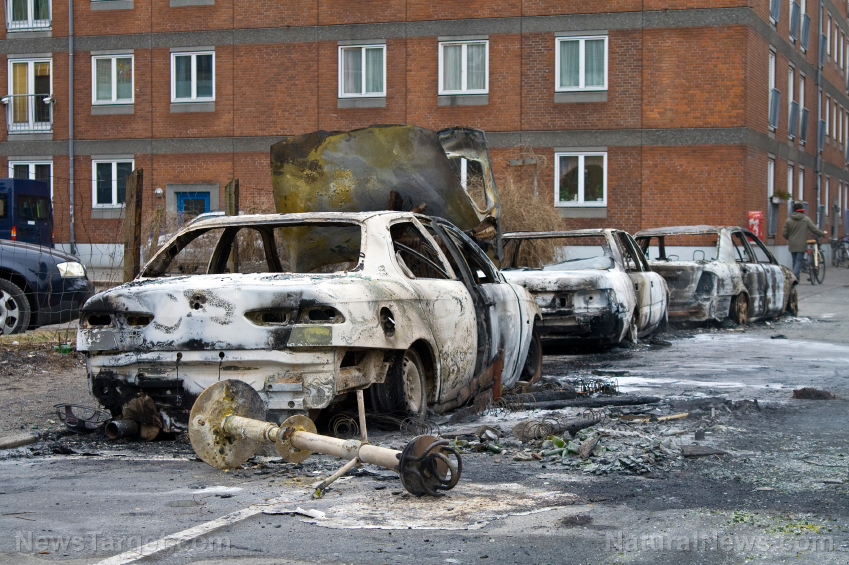 To many people, times are as tense now in the United States as they have ever seen them. Some older Americans who lived through the unrest in the 1960s see some similarities between then and now, but even they say that political, social and cultural anxieties across America today are much higher and runs much deeper, affecting all demographics and political persuasions.

The election of Donald J. Trump, while heartening to tens of millions of people, has nevertheless become a rallying cry for the fascist Left, which has become emboldened thanks to Democratic politicians and Left-leaning financiers of domestic terrorism like George Soros. Leftists who run most large U.S. cities now openly challenge federal law and the constitutional order. In doing so they are providing a terrible example to an entire generation of young Americans who are being led to believe – falsely – that they get to decide which rules of society should be observed and obeyed and which should not.

As volatile as the situation has become, it will only take one spark – perhaps at UC Berkeley, perhaps somewhere else – to ignite a nationwide civil war. (RELATED: Terrorists Among Us: Protecting Yourself When Threats Can Literally Come From Anywhere)

Add to this mix the threat of a nuclear detonation in a major American port city, and you can begin to see that things could get out of hand very quickly.

The most unstable places will be our cities, of course. And no matter how many police are deployed to contain the violence, it won’t be enough. What’s more, there won’t be nearly enough National Guard forces to augment all of the cities that will need help – and that’s even if you get 60-80 percent of Guard troops (who are civilians most of the time) to even show up, considering they’ll want to protect their families too.

Most may believe that there is simply no way to survive an urban breakdown. But that’s not true. Consider what’s going on right now in Syria. For all intents and purposes, the only major city that even functions – barely – is the capital of Damascus. The rest of the country is bombed out and decimated. And yet people survive in these ruins because they have learned to adapt and band together.

To improve your chances of survival, the following are must-have items, no exceptions (and no cutting corners):

— Food: In a widespread societal collapse, grocery stores will be among the first to be looted. What’s more, the 18-wheelers that resupply stores will cease to operate, meaning there isn’t going to be any new food coming into the city.

So you’re going to have to stockpile it in your home or apartment. And I’m not talking about a couple days’ worth; if you want to survive a long-term chaotic situation, you’re going to have to stock for the long term, like six months or more. Keep in mind you can “live” on about 1,200 calories a day if you’re not doing much of anything, so extrapolate that out for the number of people in your household to give you an idea how much you’ll need.

— Water: The most important survival item is water, period. Your body can’t live past three days without water; you’ll dehydrate and die, it’s as simple as that. In warmer weather you may dehydrate even faster.

So again, you’re going to have to stockpile water – months and months of it. You can pick up a 24-pack of bottled water for very little money, and each time you go to the store you should grab 1-2 24-packs. You’ll be surprised how much water you can store in just a few months. But for cooking and generalized hygiene as well as first aid, you’re going to need water – and lots of it. Begin stockpiling it now.

— Firearms and ammunition: If you don’t have some way to protect yourself against roving bands of thugs, angry (hungry, thirsty) neighbors and other ne’er do wells, your chances of living longer than a few weeks are pretty slim. It is recommended that you get your hands on a firearm, and get yourself the training and experience to know how to use it. Ammunition will also be in short supply so like your food and water, stockpile ammunition. Having at least 2,000 rounds for each gun you have is good; 3,000 rounds each is better. (RELATED: Collapse.news Publishes Comprehensive List Of REAL Assets That Hold Their Value Through Nuclear War, Social Chaos Or Global Debt Collapse)

— Basic medical supplies: This will consist of band-aids and bandages, antibiotic cream, over-the-counter painkiller/anti-fever meds, cough syrup, chapstick, eye drops, and – if you suffer from allergies – an antihistamine.

Cities are wonderful places to live for most folks, but they will descend into cauldrons of hate, violence and depredation when society breaks down.