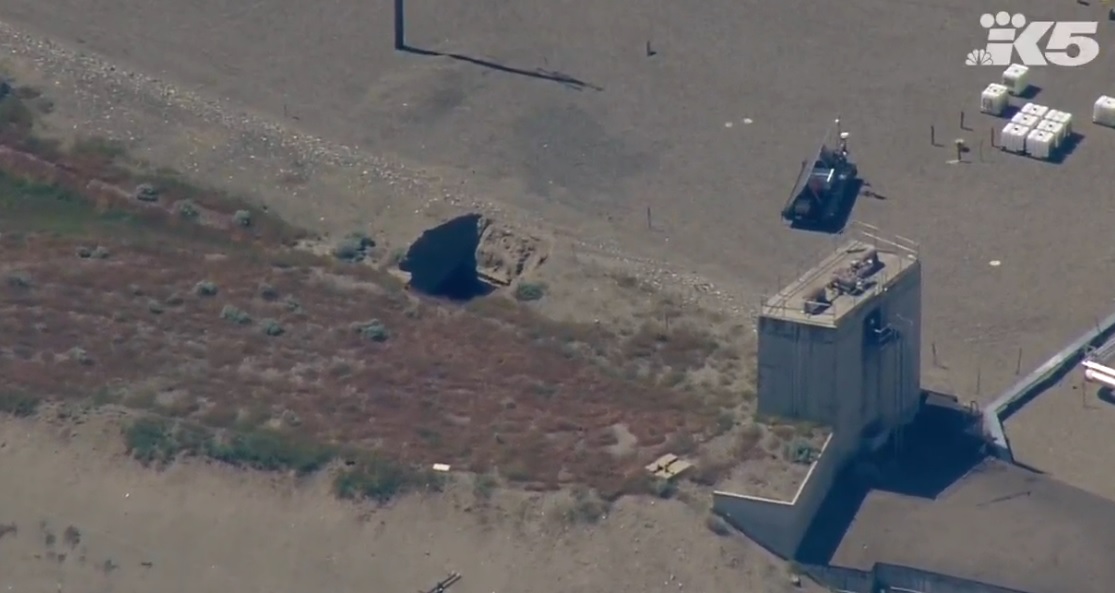 A tunnel used to shuttle hot fuel rods around the Hanford Nuclear Reservation near Seattle, WA has suffered a catastrophic structural failure followed by a partial collapse of about 400 square feet of its roof. The tunnel is widely reported as being “full of highly contaminated materials,” according to local news channel King 5. For many years, the Hanford facility manufactured plutonium-239 for building nuclear weapons. Plutonium-239 has a half-life of 24,000 years.

Immediately following the tunnel collapse, workers were ordered to immediately assume a “take cover” position, while the FAA slapped an air space ban over the site of the nuclear emergency. The Oregon Department of Energy activated its “emergency operation center” located in Oregon. King 5 also reports:

A manager sent a message to all personnel telling them to “secure ventilation in your building” and “refrain from eating or drinking.”

This advice is consistent with the belief that a massive release of radioactive isotopes has occurred. Further underscoring the danger of the situation, a robot has been sent in to check air and soils for contamination with radioactive elements: This particular incident does not yet appear to involve a large release of radiological material from the Hanford site. However, the first rule of every radiation catastrophe (or nuclear accident) is that governments LIE to the public by default.

In the aftermath of the Fukushima fiasco, for example, we saw how Japanese government regulators ordered radiation detection equipment turned off in order to avoid anyone seeing the insanely high readings. Even as the fuel rods melted through the floor of the Fukushima-Daiichi facility and robots were being fried by the radiation, the government told all its citizens that there was nothing to worry about.

This does not, of course, mean that the officials in Washington are lying about this Hanford nuclear accident, but it’s a legitimate reason for informed skepticism about any “official” reports you might encounter.

As an interesting tangent to all this, I am the inventor of a U.S. patent-approved radiation science invention known as Cesium Eliminator, described in this patent. Cesium Eliminator removes cesium-137 radionuclides from the human digestive tract, and as described in this article, I have pledged to donate manufacturing rights to any U.S. government entity that wishes to manufacture the product and give it out to citizens following nuclear accidents (or nuclear war).

I have also stockpiled 10,000 kg of Cesium Eliminator manufacturing material in Texas, which I have pledged to Texas Gov. Greg Abbott’s direction, should a nuclear accident occur in Texas. Let us all hope it never comes to that…