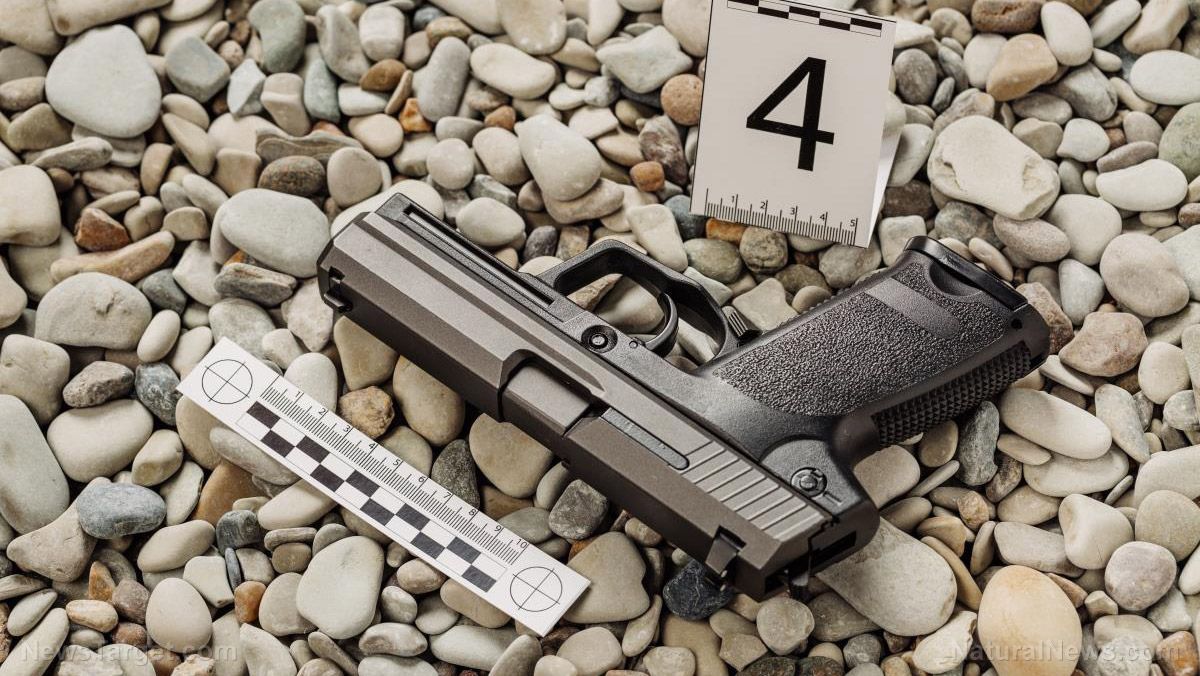 Gun shots whizzing through the air. A woman screaming from somewhere nearby. These were the sounds that could be heard on Dundalk Avenue in Baltimore last Wednesday shortly before 3:00 in the afternoon. Police say that the shooter robbed two people in the parking lot of the Logan Village Shopping Center and then boarded a No. 10 MTA bus. Officers stopped the bus just one block away from the shopping center near the intersection of Dundalk Avenue and Belclare Road, and then engaged in a brief firefight with the shooter. A video of the shootout that has been posted online then shows the gunman running out of the bus, presumably to find either new cover or a car to escape in. Within seconds, however, the man was shot dead on the lawn.

The shooter has yet to be identified, and the names of the wounded officer and the bystander have not been released. The officer that was injured in the shootout was transported to the Maryland Shock Trauma Center and was in serious condition, according to police spokeswoman Elise Armacost. The bystander was taken to a local hospital.

“I heard boom-boom-boom-boom-boom,” recalls Dave Barrett, who was sitting in his basement watching television when he heard the sound of gunshots and a helicopter coming from outside. “By the time I came down, you could still see all the smoke in the air from the gunshots.”

County Councilman Todd Crandell, who is a representative for Dundalk, said in a statement, “It’s shocking, and I have a sense of real anger that someone wants to commit something as heinous as that in our community, as senseless as it was.” He went on to say, “It makes you angry, but none of those emotions matter right now. The only thing we need to be concerned about is the people who are injured.”

It’s worth noting that Baltimore, Maryland has some of the strictest and most burdensome gun regulations in the country. As Newsmax reported in November of 2014, the city of Baltimore experienced a whopping 217 homicides in 2012 alone, despite the fact that Baltimore has banned 45 different assault weapons, has implemented a capacity limit on gun magazines, and increased the licensing requirements for those who seek to purchase a handgun. The fact of the matter is that deep blue states such as Maryland that are constantly passing laws that infringe on Second Amendment rights are not decreasing the amount of violence on the streets; they are actually sending crime rates through the roof.

Of course, the shooting that occurred last week in Baltimore is just one of many. On Wednesday, June 14, a gunman opened fire on Republican members of Congress at a baseball practice in Alexandria, Virginia. That same day, another gunman took three lives at a UPS facility in San Francisco. This is on top of hundreds of homicides that occur each year in cities like Chicago, Detroit, Los Angeles and New York City. No matter which way you look at it, the fact remains that many areas of the United States just are not safe.

But the answer to this isn’t sweeping gun control like Chuck Schumer and Nancy Pelosi routinely tells us. Rather, the answer lies in the law-abiding gun owner who can respond to one of these mass shootings in the blink of an eye, potentially saving countless innocent lives. It may make those on the left uncomfortable, but the solution to bad guys on the streets with guns is good guys on the streets with guns. Because, as the Second Amendment to the United States Constitution says, the right of the people to keep and bear arms shall not be infringed upon.