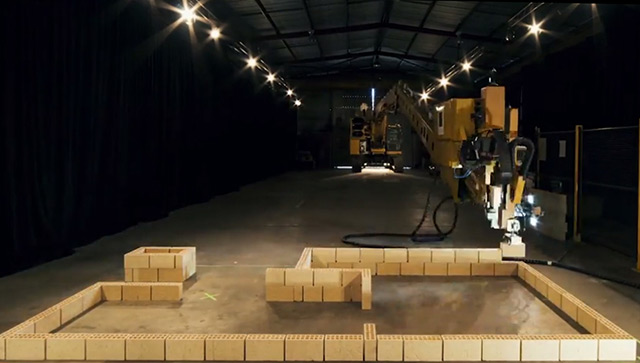 Robotics company, Fastbrick Robotics has signed a memorandum of understanding with global construction manufacturer Caterpillar to develop, manufacture, and sell the former’s bricklaying technology. Fastbrick is the developer of Hadrian X, a one-armed bricklaying robot which can lay 1,000 bricks an hour, gluing them in place as it works. This means that Hadrian X can build an entire house in just two days. In an investor presentation made last February, representatives of Fastbreak announced that they hope to release commercial prototypes of Hadrian X by 2019. Each robot would cost $2 million — a unit price the company says, “offers a very high return on investment, giving [the] business a very strong case for these machines,” as reported on BusinessInsider.com.au. The first commercial Hardian X unit, which is mounted on a truck with a 30-meter boom arm, is expected to be delivered by the end of this year.

The beauty of the system, according to either group’s official press statements, is the significantly reduced need for human interaction. Hadrian X can work unsupervised all day, every day, until the project is completed. Fastbrick Chief Technical Officer, Mark Pivac was quoted as saying, “We actually print a house, layer by layer … almost as if it’s growing out of the ground.” Some aspects of the home-building process would still need one or two human workers, but the potential of Hadrian X suggests that construction companies need not hire so much.

Caterpillar has the option to invest a further $8 million in Fastbrick, raising their stake in the company by around seven percent. Both groups say that this collaboration marks the beginning of more automated technology improving various industries worldwide.

“We are a frontier company, and we are one step closer to bringing fully automated, end to end 3D printing brick construction into mainstream,” Pivac said on DailyMail.co.uk. “We’re very excited to take the world first technology we proved with the Hadrian 105 demonstrator and manufacturing a state of the art machine.”

Pivac was highlighting another fascinating aspect of Hadrian which is that instead of using traditional cement, the robotic arm uses construction glue. The firm noted that the switch maximizes speed of the build, along with the strength and thermal efficiency of the completed structure.

According to Pivac, Hadrian X is able to work with different sized bricks, and can even cut, grind, or mill each brick to fit the desired pattern.

Hadrian X is the product of a decade’s worth of experimentation by Fastbrick and has cost an estimated $7 million so far. The product will be first marketed in Western Australia with a projected expansion of worldwide sales within a few years after its official launch.

In response to the potential effects Hadrian X may have on the industry, particularly with employment, Pivac said he had “nothing against bricklayers” and that this technology was built merely to improve the process on how houses were made. He also said that robots could attract younger people to join the construction industry. (Related: Just ONE robot eliminates SIX jobs analysis finds…human labor rapidly becoming obsolete.)

He ends with, “We’re at a technological nexus where a few different technologies have got to the level where it’s now possible to do it, and that’s what we’ve done.”