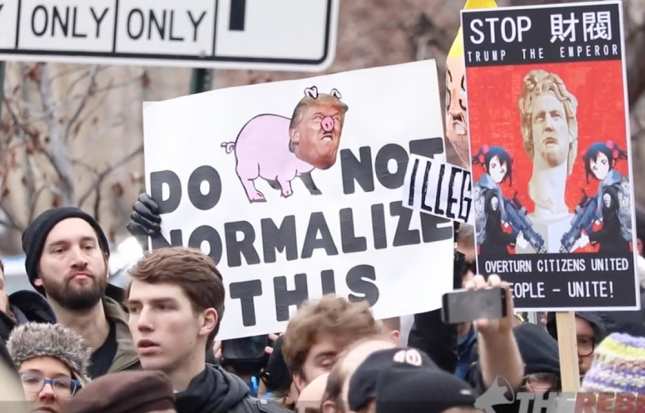 Everyone in the so called “resistance” movement against Donald Trump thinks that they’re fighting a rising tide of fascism in America. What they don’t realize however, is that they are the biggest authoritarians of all. They’re the ones who love big government and have a habit of shutting down everyone they disagree with. They’re the ones who have been responsible for the most political violence over the past year. Inside their social echo chambers it’s easy for them to view themselves as heroes, but it’s obvious to everyone else that the far-left is the most tyrannical force in America today.

In fact, Leftists are so unaware of how authoritarian they are that they’ll applaud the words of history’s most famous dictator, because his rhetoric is shockingly similar to theirs. We know this, because last week a Trump supporter managed to infiltrate a leftist protest in Chicago, where he was given an opportunity to speak to the crowd. He proceeded to read off several quotes from Adolph Hitler that were derived from his speeches and Mein Kampf. All he did, was replace words like “jews” or “bankers” with “Donald Trump,” among other words that made the quotes relevant to modern ears.

At the end of the speech the crowd applauded him, and one of the organizers was so impressed that he tried to recruit the Trump supporter.

Of course, you probably couldn’t expect them to recognize these Hitler quotes. Despite how famous and hated Hitler is, very few people in America are actually familiar with his speeches. What’s most alarming and humorous about this incident, isn’t that these leftists had no idea that they were listening to Hitler quotes. It’s that they agreed with the content of these quotes, and thought they were profound. It just goes to show that modern socialists aren’t that different from the socialists of the 20th century, which includes both Communists and Nazis.