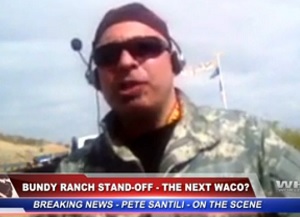 President Donald J. Trump’s ongoing feud with the disgustingly dishonest “mainstream” media has the Left-wing journalists who work for the various outlets in a tizzy. His combativeness and stalwart opposition to cowering before them like most other Republicans tend to do has them crying foul and screaming that his actions are liable to ‘incite violence’ against them.

As The Blaze reported recently:

The editor-in-chief of The Atlantic, Jeffrey Goldberg, told Katie Couric during the Aspen Ideas conference on Wednesday that he worries that President Donald Trump is turning the American public against liberal journalists to the point of violence.

He said that if violence against journalists were to occur, Trump would solely shoulder the blame.

Other Left-wing media types are making similarly ridiculous claims. Richard Wolffe of the far-Left The Guardian, blamed Montana Rep. Ben Jacobs’ recent assault against a reporter who kept sticking a microphone in his face after being asked repeatedly to stop on Trump.

“You can trace back the decline in our politics to a single campaign and a single candidate, who riled up his crowds to turn on the press and hurl abuse in their direction,” he wrote.

Right. As if nearly all of the politically motivated physical violence that occurred during the 2016 election cycle wasn’t really coming from the Left, not Trump supporters.

But of course, the disgusting Left-wing establishment media ignored all of this violence, and when they did cover it, that coverage was almost always from the perspectives of a) Trump supporters started it (which is BS); or b) Trump supporters deserved what they got.

Speaking of violence against journalists that has also been ignored by the princes and princesses of the “mainstream” media, indy journalist Pete Santilli — who traveled to cover the standoff at the Malheur National Wildlife Refuge in Oregon in January 2016 — was arrested for “conspiracy” by federal authorities and has been sitting in jail ever since.

“Like a dozen of the ‘occupiers,’ Santilli was charged with ‘conspiracy to impede federal officers,’ a vague and controversial Civil War-era charge that has been criticized — especially when applied to a radio host serving as an embedded journalist amid the protest against the persecution of two local ranchers and the broader federal assault on liberty, property, and the Constitution,” said a report initially published in The New America and republished on the FreePeteSantilli.com website.

“I’m not armed. I am armed with my mouth. I’m armed with my live stream. I’m armed with a coalition of like-minded individuals who sit at home on YouTube and watch this,” Santilli said during the standoff, noting that he was even thanked by a local sheriff for urging non-violence on several of his broadcasts.

Without a doubt Santilli was fearless in his broadcasts and had no problems speaking plainly about the potential for federal abuses during the January 2016 standoff. And sure enough, his warnings proved prophetic: Last month an FBI agent was indicted on multiple federal charges alleging he lied about shooting one of the standoff group’s negotiators, Robert “LaVoy” Finicum, as police and agents sought to arrest him and a few others in late January. (Related: ‘My Father Was Murdered Today’: U.S. Citizen Shot Dead By Federal Agents While Protesting Kleptocratic Government Tyranny.)

There wasn’t much national press coverage of that, either, and meanwhile, the media elites in D.C. an beyond are concerned about their safety while one of journalism’s own sits in jail on a bogus charge.

It’s not difficult to figure out why “the media” in America is trusted less than used car salesmen and members of Congress: Their hypocrisy is blatant, their whining disgusting, and their penchant for turning everything into a Left-wing political cause nauseating.

Visit the FreePeteSantilli.com website to keep up with America’s jailed independent journalist.