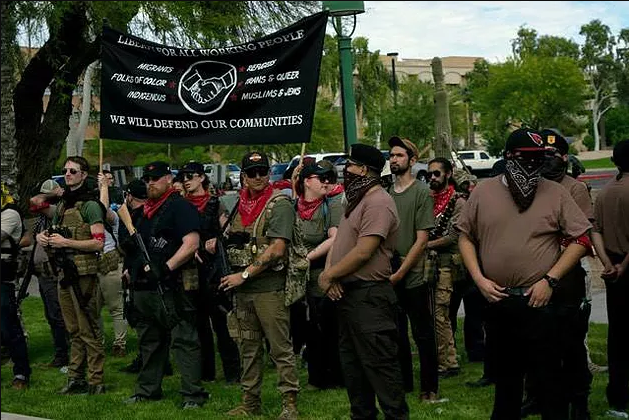 President Donald J. Trump has no shortage of political and media enemies in Washington, D.C., but he’s getting thousands more all across the country if one Left-wing domestic terrorist group has their way about it.

“Redneck Revolt,” according to watchdog website Far Left Watch, is a budding communist/Marxist organization that teaches “urban guerrilla” warfare, kidnapping, and armed resistance to authority. And the group’s members have a healthy disdain for Trump and his supporters.

Right wing radio personality, Dana Loesch and The National Rifle Association recently came under fire for launching a “controversial” ad. There was an immediate backlash from numerous left leaning publications claiming that the video was a call to violence. Interestingly enough, the recent spike in political violence has come overwhelmingly from the left. Even more concerning is the growth of far left organizations openly advocating for “armed struggle,” especially considering the recent targeted shooting of Republican House Majority Whip Steve Scalise and three others by a deranged left wing activist.

Redneck Revolt is one of the fastest-growing Alt-Left groups in the Age of Trump, describing itself as an “above ground militant formation” founded in June 2016 and now claiming to have more than 30 fully vetted branches around the country.

If you read through the group’s organizational philosophy, it all sounds so very reasonable, which is in line with other far-Left militant groups: Opposition to “white supremacy,” quest for “equality,” economic parity, etc. But then the organization begins to focus on the usual anti-capitalist, anti-wealth, anti-founding American principles kind of stuff that looks very similar to what you’d find in the Communist Manifesto.

Finally, they openly call for “militant resistance” and “revolution” — but not the kind that freed our nation from the grips of an authoritarian monarchy.

Group members have been busy recruiting as well, and in some of the same places where Left-wing liberals used to accuse conservative, liberty-minded militia groups of recruiting, like gun shows. And when they’re not recruiting, they are pushing for class warfare (sound familiar?), and conducting armed anti-Trump demonstrations (remember when the Alt-Left claimed that Trump supporters were the violent ones?).

Given all of this, there is much more about the group that should alarm law-abiding Americans of all political stripes, and that is its advocacy for armed rebellion, guerrilla warfare, and ‘revolution.’ On the group’s website are links to a number of ‘resources’ in the form of PDF files including a manual called “Three-Way Fight: Revolutionary Anti-Fascism and Armed Self-Defense” (really hypocritical, considering that this organization is the real face of fascism, not Trump or his supporters); “Piece Now, Peace Later”; “I Will Not Crawl”; and “Mini-Manual of the Urban Guerrilla.”

And while claiming to be anti-racist, the group focuses a lot of its attention on recruiting “poor, working-class whites.”

As this publication notes:

Considering Redneck Revolt’s vision, their embrace of the term ‘redneck,’ their belief in building solidarity with working and poor communities, their recruitment within rural white communities [emphasis added], and their embrace of late ‘60’s-style survival programs, it is hard not to draw parallels to the original Rainbow Coalition, and specifically to the Young Patriots (YPO).

Class warfare is a major point of focus within the group. Said one member named “Shaun”: “All poor and working class folks suffer at the hands of the rich. We all have trouble — bordering to the point of impossibility — making house rent, paying medical bills especially these days, covering food, making sure that our children and families are cared for, and it doesn’t have to be that way.

“It’s that way because a vastly small percentage of the population hordes access to resources and they’re able to do this because they’ve managed to get one-half of the working class to turn against the other half in exchange for basically preferential treatment,” he added.

“It’s in everyone’s best interests that we as quickly and aggressively as possible dismantle that system so that poor and working folks essentially have something resembling a fair shake at a decent life,” he said — without really defining any of that.

This group is for real, and it’s growing. And it’s not out to preserve or protect the American dream, but rather to upend it in the name of ‘fairness’ and ‘justice.’