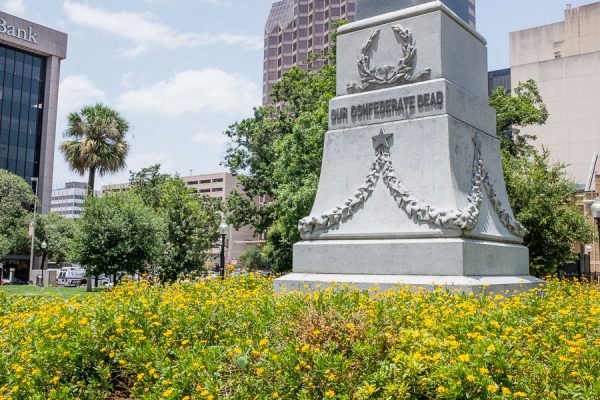 Thousands of armed Texans are set to rally in San Antonio Saturday to protect a 117-year-old monument honoring Confederate soldiers from Alt-Left groups and local politicians who have threatened to remove it.

The August 12 rally at Travis Park, which is being spearheaded by the group This Is Texas Freedom Force, will feature a number of speakers who are scheduled to appear in support of protecting not only the monument, which has stood in the park since the turn of the 20th century, but all of Texas history.

“We will have several speakers that will take the stage & send a clear message to San Antonio City Council, the media & the citizens of San Antonio that we will not stand quietly by while our Texas History is erased,” says an announcement on the TITFF Facebook page. “We encourage any and all Texans to join us at Travis Park to send this stern message.”

The upcoming “Save the Confederate Monument” rally follows an incident July 4, in which supporters of Black Lives Matter marched on the monument and demanded its removal, claiming it stood for “racism” and “bigotry.” Following the rally, a pair of San Antonio council members, Roberto Treviño of District 1, and Cruz Shaw of District 2, vowed to take up their cause and push to have the monument removed.

Together they filed a Council Consideration Request July 25 to have the monument moved out of Travis Park “a site/location/institution where it will be preserved and integrated in to an educational context,” the document said.

The request claims that the monument in Travis Park and all Confederate monuments scattered throughout the country, as well as “the veneration of Confederate leaders in public places have historically been used since the end of the Civil War to be reminders of a second-class citizen status attributed to people of color – part of the cult of The Lost Cause.”

“To historically oppressed communities, these monuments were erected to send a message about who was still in charge of the city in which they lived,” it continues. “These monuments are a daily reminder not of our history, but rather our legacy of subjugation.”

“San Antonio is a city rich in culture and diversity, so our public spaces should reflect that by being welcoming to everyone,” Treviño said. “The relocation of this monument is not an attempt to wash away the hard truths of our history, but rather to ensure that our diverse array of citizens and tourists can enjoy Travis Park, one of the city’s most prominent parks.”

That’s nonsense, said Jeremy Alcede, director of legal and political affairs for TITFF. The monument is simply part of Texas history, and as such, should be preserved.

“You may not like our history, but that doesn’t give you the right to erase it,” he told NewsTarget. “We don’t agree with slavery, but this isn’t about slavery. This is about preserving Texas history.” (Related: This legal immigrant patriot voiced passionate opposition to gun control at a public hearing; says it doesn’t work.)

He also noted that governments – local, state and federal – have spent billions of dollars since the years after the Civil War preserving monuments, battlefields and other historical sites, and to simply close them down or get rid of statutes and monuments – which has been happening at an alarming pace throughout the South, especially – is an incredible waste.

In addition, he said that his organization and others like it aren’t demanding that monuments to the civil rights era, which honor mostly minorities, be taken down or removed from their public places, even though some people could consider them racist or bigoted.

The rally on Saturday is scheduled to begin at 2 p.m. local time and last until 6 p.m., though Alcede said that the city of San Antonio has been imposing unreasonable costs and requirements on the group as they have gone through the process of securing a permit to hold their event. As of press time, the city still had not issued them one.