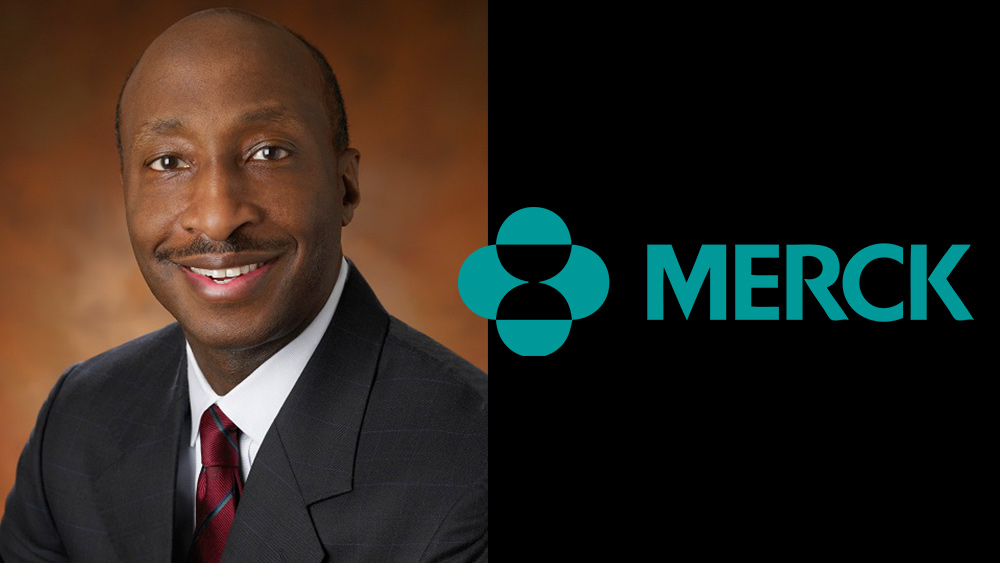 In case you haven’t heard, Merck CEO Ken Frazier resigned from President Trump’s manufacturing council, blaming Trump for the violence in Charlottesville that killed one protester and two police officers (whose helicopter fell out of the sky for yet-unknown reasons).

Yet Ken Frazier himself should be arrested and imprisoned for carrying out mass chemical violence against all Americans through the fraudulent sales of toxic, deadly prescription pharmaceuticals and vaccines manufactured and sold by Merck on a daily basis. Nearly all of Merck’s drugs are “approved” by the FDA through an utterly fraudulent process of fake science, cherry-picked clinical trials and regulatory corruption and fraud. Remember, Merck is the same company whose own virologists filed a False Claims Act with the federal government, explaining they were ordered by Merck management to fake vaccine trial results in order to “trick” the FDA. Merck’s entire mumps vaccine operation is a complete and total fraud.

Merck has also been caught committing widespread scientific fraud by disguising its in-house propagandists as “independent science” authors for medical science papers that were published in mainstream science journals. Merck is to medicine, in other words, what Monsanto is to the food industry: They’re both steeped in evil, scientific fraud and deep deception.

The number of deaths in Charlottesville absolutely pales in comparison to the number of Americans killed each year by Merck and other pharmaceutical giants. As PharmaDeathClock.com documents in real time, chemotherapy drugs have killed 17.6 million people since the year 2000. SSRI drugs have killed over 700,000 people, and the generic category of “prescription drugs” shows at least 400,000 deaths. Merck’s share of these deaths is substantial. So why aren’t millions of Americans marching in the streets to demand Ken Frazier’s scalp? (The answer, of course, is that public outrage is entirely manipulated by George Soros and the mainstream media to be directed at their political targets. It has nothing at all to do with the truth about which corporations or people are actually doing the most killing of innocents…)

Merck is also heavily involved in profiting off the opioid addiction epidemic that’s now ravaging America while generating record profits for companies like Merck. If anyone is committing mass violence against America, it’s people like Merck CEO Ken Frazier, a person who belongs behind bars for his continued sacrificing of human beings for corporate profits. The violence in Charlottesville is nothing at all compared to the violence carried out by Merck’s vaccine division alone, not to mention its other drugs. Now that Ken Frazier of Merck Pharma has resigned from President’s Manufacturing Council, he will have more time to LOWER RIPOFF DRUG PRICES!

And he’s right about that: Merck, Pfizer, GSK and other drug giants have all ripped off America for decades with sky-high, monopoly-enforced drug prices that are bankrupting this nation (while poisoning people to death). Big Pharma is the primary reason why health care is so unaffordable in America, and it’s companies like Merck that are routinely caught bribing doctors, price fixing drugs, defrauding Medicare, faking drug trials, corrupting regulators and buying off media outlets to push more pro-drug propaganda. Just search Natural News for “Merck” to see dozens of articles document all these crimes and violations over the years.

In all, the violence witnessed in Charlottesville doesn’t even register compared to the chemical violence committed against millions of Americans every year by Merck and other drug giants. Yet have you noticed how the bought-off mainstream media never covers prescription drug violence? That’s because they’re all prostitutes for the pharmaceutical industry.

In a truly just society, people like Ken Frazier would be arrested, indicted for widespread fraud and corruption, and spend the rest of their lives behind bars. Instead, he’s probably paid a $100 million salary to keep poisoning America while claiming Trump is somehow responsible for violence in America. Ever notice how powerful corporate CEOs never go to jail in this country? No, according to the fake news media, poisoning children with mercury in vaccines is “loving” and good, but trying to dismantle the Big Pharma price monopolies and make medicine more affordable is “bad” and evil.

CEOs whose products murder millions of people are “good people,” we’re told, while President Trump is somehow a “racist” even though he had nothing at all to do with the events in Charlottesville. That’s how twisted things have become in this country. And of course, there’s zero media coverage of this anti-Trump activist who just shot his neighbor in the head at point blank range. When Leftists shoot Trump supporters, the left-wing media pretends it never happened.