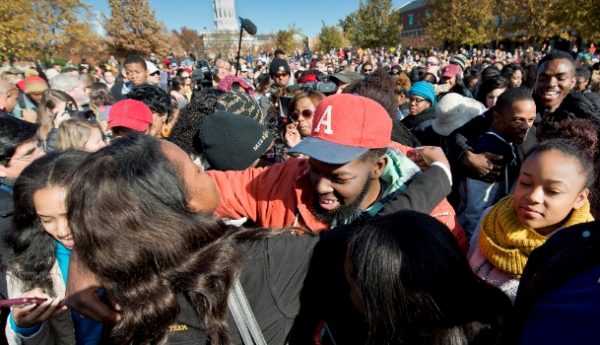 In case you haven’t noticed, anyone speaking out against Left-wing violence in America is quickly shouted down and branded as a racist, Nazi bigot.

Conservatives and Trump supporters have known this for months because they’ve been regularly targeted by Antifa thugs and members of BLM and the so-called “Occupy” movement anytime they show up to a free-speech rally or an event featuring our president.

The nasty business in Charlottesville has even been scripted by the “mainstream” media to have been perpetrated solely by “the Alt-Right,” even though President Donald J. Trump schooled the media jackals and cowardly Republican lawmakers and CEOs who fled like scared children from his manufacturing and business councils.

Of course, both sides were guilty, but the Left also showed up specifically to do battle with demonstrators – some of whom were white racists and bigots – because that’s their modus operandi. One Antifa organizer proudly admitted as much in a recent interview with CNN, when he said that members of the group show up at all Right-leaning events specifically to get into physical confrontations with them.

“The idea in Antifa is that we go where they (right-wingers) go. That hate speech is not free speech. That if you are endangering people with what you say and the actions that are behind them, then you do not have the right to do that,” said Scott Crow. “And so we go to cause conflict, to shut them down where they are, because we don’t believe that Nazis or fascists of any stripe should have a mouthpiece.” [Emphasis added]

Never mind that Antifa thugs think this about any and all Right-leaning political rallies and public events. They think we’re all racist bigots when, of course, nothing could be further from the truth.

But you read for yourself the group’s stated intentions: To show up wherever someone is speaking whom they don’t like, and “cause conflict” and violence. Even Reuters reported Wednesday:

At the weekend rally against the removal of a statue of Robert E. Lee, commander of the pro-slavery Confederate army during the U.S. Civil War, many participants were seen carrying firearms, sticks, shields, and lit torches. Some wore helmets.

Even the Washington Post and other “mainstream” media outlets are openly promoting political violence. Under the guise of “analysis” of events in Charlottesville, N.D.B. Connolly, a history professor at Johns Hopkins, openly called for rioting (which used to be against the law) by encouraging Left-wing activists and liberals to “start throwing rocks.”

So, you know when the “mainstream” begins sympathizing with rock-throwers and organizations that under any other circumstance would qualify as Left-wing domestic terrorists, that politically-related violence isn’t going away anytime soon.

Which is precisely why you should not only anticipate it, but prepare for it.

Most people are not in the kind of extreme shape that they need to be to defend themselves from physical assault. But I can help.

I’ve just written an e-book that you can download completely free. It provides you with the kind of functional, extreme fitness workouts that will get you into tip-top shape. In just a few months from now you could be in a whole new fitness class, and be far less vulnerable to the storm of political violence that is coming to America, compliments of the Left.

I urge you to download this free e-book today, Fit to Fight: A Prepper’s Guide to Extreme Fitness for All Ages, co-produced with Bugout.news.

If you are really serious about physically preparing for the social chaos ahead, this e-book is your best chance; I encourage you to take it.