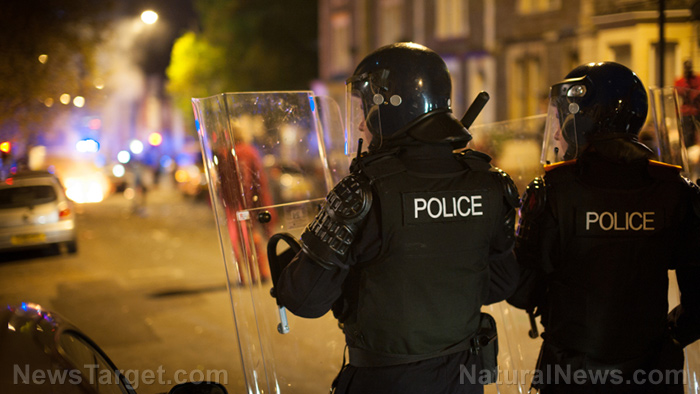 Hardly a day goes by when the new face of American hate, Antifa, proves once again that it, and not Trump conservatives, are the real reason why there’s so much political and social turmoil in our country these days.

And what’s more, the famously enabling Left-wing “mainstream” media is beginning to discover that covering for thugs all these months has only empowered them and made them even more violent than they were to begin with.

As reported by a number of outlets last week and over the weekend, there were new protests and new rounds of violence in Berkeley, Calif., home of the “free speech movement” in the 1960s, as Alt-Left Antifa members once again resorted to the same kind of violent intimidation practiced by Hitler’s Brown Shirts in the 1930s to shut down free speech events including one that wasn’t even being staged by anyone on the political Right.

But there was one caveat this time around. As documented by Zero Hedge on Monday, several news outlets accurately reported that the Antifa thugs were responsible for instigating nearly all the violence, spurred in no small part by the fact that members of the far-Left organization turned on the media.

First, the Washington Post, if you can believe it. The paper ran with this headline: “Black-clad antifa members attack peaceful right-wing demonstrators in Berkeley” — though there was no indication that any “right-wingers” were actually there. Still, it was a refreshing bit of honesty from a paper known to emphasize right-wing hate, even if its writers and editors have to create it out of thin air.

“Their faces hidden behind black bandannas and hoodies, about 100 anarchists and antics — ‘anti-fascist’ — members barreled into a protest Sunday afternoon in Berkeley’s Martin Luther King Jr. Civic Center Park,” the paper reported. It added that Antifa members skirted barriers that police had erected then “melted” into a bigger crowd of some 2,000 people who marched peacefully during a “Rally Against Hate” event.

Shortly after that, however, “violence began to flare,” the Post reported, noting that Trump supporters were grabbed and beaten, often being ganged up on by several Antifa thugs.

The Associated Press also reported that at least five people were attacked and that one of its reporters witnessed the melees, Zero Hedge documented.

But perhaps the most stunning display of honesty came from well-known Bay area TV personality Frank Somerville, a KTVU host. In a Facebook post, he noted he “experienced hate first hand” when he decided to attend the protests as a private citizen, not as a news anchor.

“I experienced hate first-hand today. It came from these people dressed in all black at a protest in Berkeley,” he wrote.

“Ironically they were all chanting about NO hate. Some had shields and gloves. Some had helmets. Some had gas masks. I was watching them and taking it all in,” said Somerville.

“I came there on my own time. Because I wanted to see things first hand. I was dressed in shorts and a tank top. At one point I took out my phone to take a picture. And that’s when it all happened.”

He said at that point he was confronted and threatened by some of the Antifa thugs who were “yelling at me” with words “filled with venom, anger, hate and intolerance.” Some threatened to take his phone after he had taken a couple of pictures of the black-clad Antifa thugs.

“I walked away stunned,” he said. “I grew up in Berkeley. I marched in the anti-war protests during the sixties.

“It’s one thing to read about HATE,” Somerville noted further. “It’s another thing to be right next to it. In my opinion, these people dressed in black are just as hateful and intolerant as the people they are protesting against.” (Related: WAKE UP, people! Alt-Left and Alt-Right are run by the same forces… the goal is “divide and conquer.”)

When did assaulting someone stop being a crime and start being a ‘form of protest’?