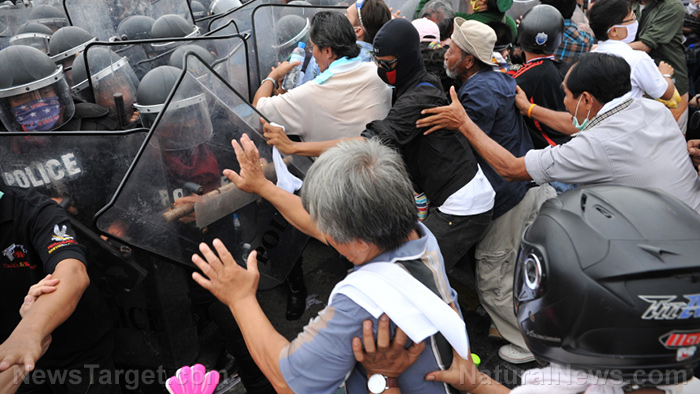 The Revolutionary Abolitionist Movement (RAM) identifies itself as “a political movement dedicated to freeing people from bondage and building resistance in the United States”. It supposedly, like every other antifa (radical political movement of autonomous, self-styled, anti-fascist groups) group, denounces white supremacy, bigotry, and racism in all their forms.

It also advocates for gender abolition and the expropriation or seizure of goods and lands. Furthermore, it says in its website: “As revolutionary anarchists, the abolitionist struggle must be extended to the state and capitalism, the perpetrators of oppression. The Rojava Revolution, in northern Syria, provides us with a model for revolution today with its foundation in communal- and council-based political organization and militant defense.”

Mentioning “The Rojava Revolution” as a model for a crowd-initiated bearing of arms should ring alarm bells. This is because most of the “revolutionary fighters” that are implicated in that conflict are Marxist and communist guerrilla groups such as the International Freedom Battalion, the Kurdish YPG (People’s Protection Units), and the International Revolutionary People’s Guerrilla Forces.

Add to that the fact that RAM has a propensity to lean towards communism, which is responsible for the deaths of 94 million in the 20th century, wherein more people lost their lives due to communism than because of homicide (58 million) and genocide (38 million) put together. Meanwhile, the number of fatalities brought about by World War I (37 million) and World War II (66 million) is greater than communism’s death toll by only nine million.

However, according to a 2011 poll released by Asbur Park, New Jersey-based polling company Rasmussen Reports, 11 percent of Americans still believe that communism would still be the better political system in the country than what the United States currently has.

Among RAM’s activities are hosting anti-police workshops called “Our Enemies in Blue”. Justifying its action against law enforcement, the group said in a press statement: “Mosques are being ruthlessly bombed, state agencies, and vigilante groups are deporting Latino people with relentless vigor, LGBTQ people are being battered, and the destruction of black life continues unabated as millions languish in the plantations of the modern day slave system.”

“We fight side by side with those facing state and reactionary violence and with each person we free from captivity the stronger we grow. As demonstrated by our resistance in Charlottesville, we will not cede one inch of ground to racists,” the group said.

The group is referring to what happened on Saturday, August 12 in Charlottesville, Virginia when a “Unite the Right” rally, which was conducted in protest of the removal of a statue of Confederate icon General Robert E. Lee, was interrupted by a car hurtling towards anti-racism protesters, causing the death of 32-year-old Heather Heyer and 19 other individuals in the process.

“As each new collective forms, we begin to create new political realities and continue the march together against white supremacy and for a dignified world,” RAM concluded. (Related: A total eclipse of SANITY: America under the spell of mass hysteria engineered by a dangerous, globalist-controlled media.)

RAM glamorizes police killings that have happened in the past, such as the one perpetrated by former Black Panther Party member Russell Melvin “Maroon” Shoats, who rained five bullets at a police officer’s back in 1970. RAM opened a branch in Philadelphia on Sunday, August 20.

Antifa websites like It’sGoingDown.org, InsurrectionNewsWorldwide.com, and Sub.media, promote RAM, and ask readers to donate money for the group’s cause.

Read up on more stories such as this one at Fascism.news.