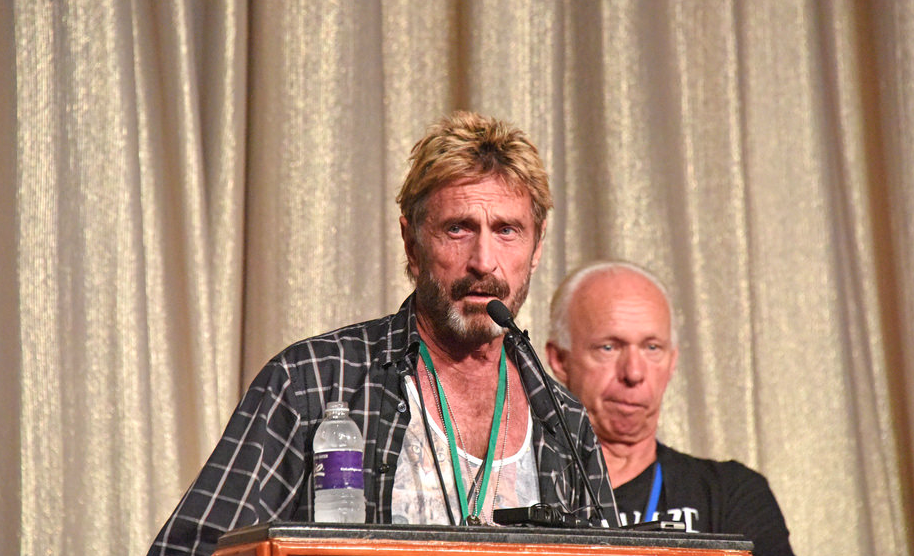 In a recent CNBC interview that’s being widely touted by self-deluded Bitcoin promoters as some kind of “smack down” of JP Morgan CEO Jamie Dimon, Bitcoin advocate John McAfee accidentally admitted why Bitcoin is a total fraud that’s doomed to fail.

In answering Jamie Dimon’s recent declaration that Bitcoin is a fraud, McAfee replied: (see the video at The Daily Sheeple)

The problem with John McAfee’s explanation, of course, is that it admits Bitcoins can only be created through the practice of computational wheel spinning operations where the difficulty and duration of such wheel spinning is artificially made needlessly complex by the Bitcoin algorithm. In a world where Bitcoins used to be created for less than one penny’s worth of computational work, a single Bitcoin now requires over US$1,000 worth of “artificial work” to be achieved. A rational person must ask McAfee, “Why did Bitcoins used to cost just a penny to create, and now they cost a thousand dollars?” The 100,000 X increase in complexity for generating a Bitcoin, it turns out, is an artificial work algorithm known as “computational difficulty” in mining.

This admission should be shocking to all Bitcoin holders for the simple reason that if Bitcoin drops below $1,000, mining now becomes unprofitable, rendering a very large part of the entire Bitcoin mining infrastructure instantly obsolete. The only thing keeping Bitcoin mining profitable right now is the bubble pricing of Bitcoin itself, and because all bubbles eventually burst, Bitcoin mining will sooner or later reach a point where it’s not worth the investment of hardware, electricity and time. (There’s also the 21 million coin limit that’s rapidly approaching, by the way, which will spell the end of Bitcoin mining as it is conducted today.)

Furthermore, the “artificial work” aspect of Bitcoin mining and its artificial computational complexity is the digital equivalent of paying people to dig ditches and fill them in again while claiming the activity boosts economic output. This idea, believe it or not, is the classic economic paradox routinely pushed by left-leaning economic myth-meisters like Paul Krugman. Those of you who follow economic news know that Krugman openly and wholeheartedly believes that government could boost the economy by literally paying millions of people to dig ditches and fill them in again. This artificial work generates real-world abundance, according to economic fools like Krugman. That’s why Zero Hedge rightly posts an article entitled, “Why Paul Krugman Should Go Back To 5th Grade.”

And yet Paul Krugman’s ditch-digging artificial work is actually no different than John McAfee’s Bitcoin mining artificial work. In both cases, McAfee and Krugman ridiculously claims that work along has intrinsic value, even if little or nothing is actually accomplished in the real world. According to McAfee, computational expenditure automatically equals value, even when the notion is patently absurd to any rational person. If CPU cycles equaled wealth, then no one in the world would ever have to work again because people could just run computers all day and let the CPUs create wealth.

Any belief in such a system is, of course, irrational and absurd. There is no such thing as a perpetual wealth-generating machine unless you own the money supply itself and can hoodwink others into trading their effort for your currency. That’s what the Federal Reserve does, of course, and that’s the entire con of the Bitcoin Ponzi scheme: To recruit as many people as possible into the Bitcoin scheme so that they pay you cash in exchange for your CPU cycles.

Bitcoin’s “proof of work,” in other words, is nothing more than artificial work. Yet what is the real world result of such artificial work? While generating absolutely nothing that’s real in the real world — remember as Steve Quayle says, “If you can’t touch it, you don’t own it” — the Bitcoin mining process consumes enormous amounts of electricity, computing hardware and time. Yet in the end, there’s nothing to show for all that work except for carbon dioxide emissions and mercury pollution from the Chinese coal plants that power nearly a third of global Bitcoin mining. Bitcoin, in fact, has become one of the key vectors of environmental pollution that’s causing hazardous air in California’s cities.

McAfee claims that “artificial work” is actually “proof of work.” In reality, it’s proof of nothing more than the incredible stupidity of the mining infrastructure which is now burning more electricity than a city of one million people just to keep the Bitcoin blockchain from collapsing.

“Surely there’s some value in the work that we did to create the coin,” McAfee stated. But actually, there isn’t any real-world value in it at all. Bitcoin is a digital fiat currency backed by nothing, and all the “work” used to create Bitcoins is actually “artificial work” that’s made artificially complex for no logical reason other than a crude mechanism for artificial scarcity. Yet even that scarcity is a complete failure, since any person can create and launch their own cryptocurrency alongside Bitcoin, instantly creating a massive new supply of crypto coins that flood the marketplace. (And many newer cryptos are vastly superior in design to Bitcoin. For example, Z-cash…)

On top of all that, Bitcoin is clearly not a store of value, and recent research by Princeton scientists found that Bitcoin isn’t anonymous, either. Bitcoin is also highly subject to government regulation, as the recent market plunges clearly demonstrated, following the announcement of China’s largest Bitcoin exchanges closing their doors. Liquidations of Bitcoin by Chinese investors are already underway and will continue through September 30th.

One by one, all the promises we were told about Bitcoin have unraveled: It isn’t anonymous, transactions aren’t “instant,” transactions aren’t “free,” Bitcoin isn’t a reliable store of value, it isn’t immune to government regulations and so on. Yet John McAfee, in his self-deluded cluelessness, points to artificial work and says, essentially, “See? We’re expending CPU cycles for all this! Doesn’t that have value?”

Actually, it doesn’t, Mr. McAfee. It has no more value than the GPU calculations of a nine-year-old kid playing a first person shooter on a Saturday afternoon. Yeah, his rig is running all sorts of complex calculations, but at the end of the day, there’s nothing to show for it other than Cheetos crumbs that fell between the cushions of the couch.

Computation does not automatically equal value

Computation alone does not equal real-world value. John McAfee’s attempt to conflate the two ideas only shows how deeply he has deluded himself about the future of Bitcoin. And those who falsely believe that computation equals value are only allowing themselves to be fooled by this non-logic for the simple reason that they all own Bitcoin — i.e. Bix Weir and others — and can’t come to grip with reality without admitting they were wrong all along.

The bottom line? Bitcoin is headed for failure, but cryptocurrency is here to stay. The most likely long-term scenario in all this is that we’ll see a cryptocurrency backed by JP Morgan and the government — a blockchain with built-in NSA snooping and an identity layer so that all transactions can be tracked by the IRS to enable government confiscation and criminalization as deemed “appropriate” by the crooks in Washington.

And how hard is it for government to criminalize Bitcoin? Not hard at all: It’s a simple matter to run a false flag dirty bomb operation — the FBI already masterminds and executes terrorist plots every day across America — then make sure the “bad guys” who are recruited into the sting operation are fully funded by Bitcoin.

A few hours later, the fake news New York Times will declare, “CHICAGO DIRTY BOMB TERROR PLOT FUNDED BY BITCOIN.” And the house of cards falls like dominoes. The entire media will be directed by the CIA to describe Bitcoin as a “currency for terrorists, murderers and drug dealers,” and Bitcoin will be targeted in exactly the same way the Silk Road was taken down. A few Bitcoin promoters will be imprisoned, the government will claim it’s “fighting terrorism,” and the clueless sheeple of society will applaud the news that they are being “protected” by authorities.

Seeing all this play out is as clear as day. And why is this so obvious? Because we are all living as slaves in a totalitarian society run by fake news, fake terrorism and fake authority.

Will that totalitarian regime allow all their central banks and government currencies to be made obsolete by a libertarian cryptocurrency they don’t completely control? Of course not. And anyone who believes Bitcoin will overthrow the globalist money / debt cartels is naive and stupid. Trust me when I say a bunch of geeks aren’t going to overthrow centuries of globalist money domination that now rules our corrupt world.

Seven simple, self-evident questions that every Bitcoin holder should be asking themselves

Question #2) Bitcoin’s “value” has increased by 350% in the last 12 months. What has Bitcoin introduced in that time period that would justify a 350% increase in its value?

Question #4) If you are holding Bitcoin in the hopes of selling it at a higher price, how will you know when to sell it?

Question #5) What does Bitcoin offer to secure its dominant market position that no other crypto-currency offers?

Question #6) What is the profile of the typical “new buyer” to Bitcoin today vs. five years ago?

Question #7) How will you sell Bitcoin if the power grid goes down?