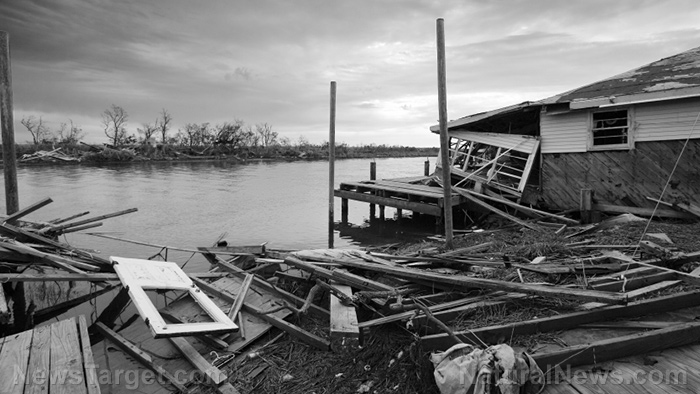 Life in Puerto Rico is about to turn medieval, thanks to the massive damage caused by Hurricane Maria, the once-in-a-century storm that just destroyed the island nation’s entire power grid.

As reported by The Washington Post, sustained gale-force winds of up to 155 miles power hour when Maria made landfall leveled buildings, flooded cities with more than 20 inches of rain, “disabled radar, weather stations and cell towers” across the country.

As the UK’s Daily Mail added, the storm also eliminated the island’s power grid, which, Gov. Ricardo Rosselló said, was “a little bit old, mishandled and weak” before the storm blew through.

Asked by CNN when the nation might have power restored, Rosselló’s prognosis was grim, indeed.

“It depends on the damage to the infrastructure,” Rosselló said. “I’m afraid it’s probably going to be severe. If it is … we’re looking at months as opposed to weeks or days.”

Continuing, he said, “It’s nothing short of a major disaster.”

It’s obviously far too early to tell how soon power will be restored to Puerto Rico, but that said, there are still some Florida residents without power more than a week after Hurricane Irma laid waste to much of that state.

That means for now — and the foreseeable future — the island’s 3.3 million people have essentially been blown back into the Dark Ages, and there is just no telling when basic services will be restored. It also means that Puerto Ricans who did not prepare for a storm (or any disaster) of this magnitude will be entirely dependent on others to take care of them.

And frankly, that’s not a good place to be. It’s not a good feeling knowing that your very survival is now in the hands of other people.

The series of storms that have struck the United States and the Caribbean this year — and there are more on the way — are just the latest examples of why it is vitally important for you to be able to emerge from such disasters ready to depend on no one but yourself for help.

As summer gives way to fall, then fall gives way to winter, the potential for more natural disasters is approaching. Bitter cold temperatures coupled with massive ice and snow storms represent threats of their own to our fragile infrastructure. And while small, regional disasters can be easily and more quickly addressed, it’s the really big disasters like the one that just hit Puerto Rico that make prepping vital to survival.

Like an act of war, which could include a nuclear attack or an attack with an electromagnetic pulse weapon — which would devastate most if not all of the U.S. power grid. The same thing could happen naturally, via a massive solar storm. NASA and international space agencies are working on a space weather radar system to warn of the latter, but it won’t be operational at least until 2021, Space.news reports.

You might be thinking that no amount of prepping could ready you for an emergency of such proportions — emergencies that would undoubtedly kill off entire civilizations or come very close to it. But that’s not the case. (Related: Nightmare scenario for millions in wake of powerful hurricanes as unprepared survivors run out of food and water)

Look at it this way. Substitute the phrase “self-sufficiency” for the word “prepper.” That really changes the entire meaning of preparedness, doesn’t it? If you’re self-sufficient, you’re essentially a master prepper already.

The fact is there are millions of people in the U.S. who are quite prepared to ride out any emergency situation, short of a planet-killing scenario. Even if such an event never happens, you don’t want to end up like those poor folks in Puerto Rico.

No doubt most of them never thought they’d see a natural disaster that would destroy their entire power grid.