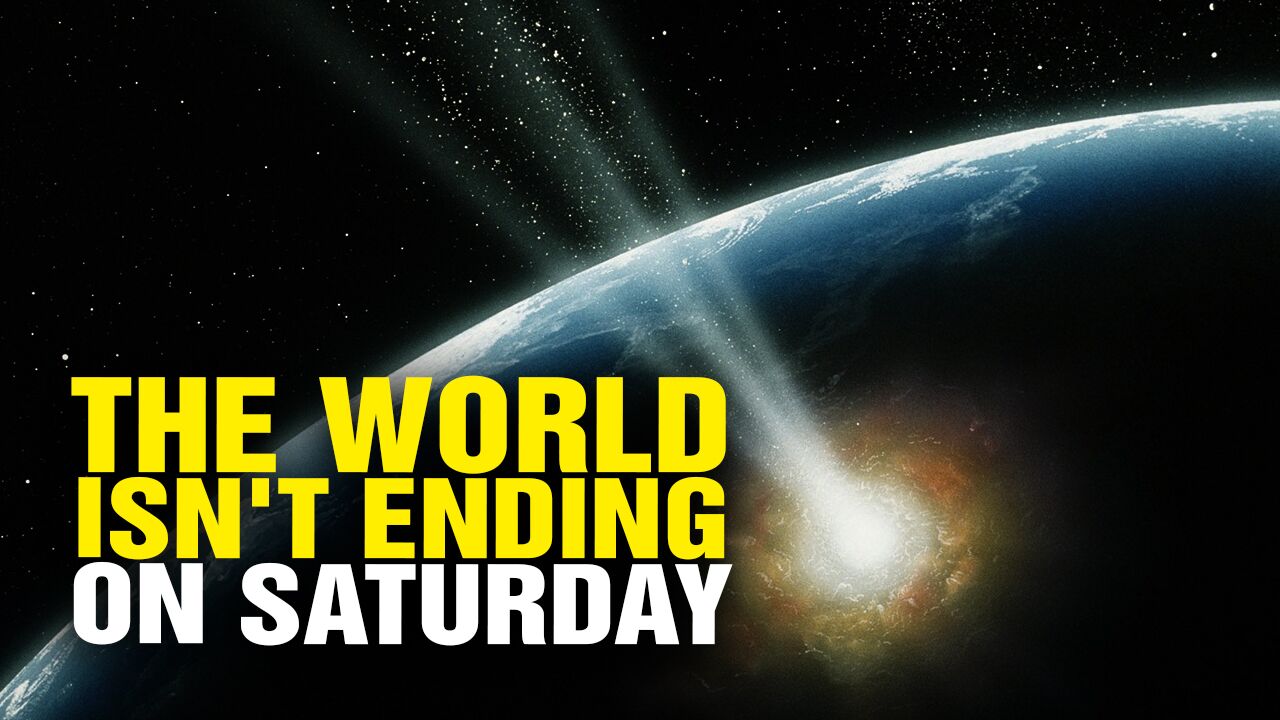 Despite the popular predictions of some prophecy-minded groups, the world isn’t ending this Saturday. I fully realize many people will be seriously disappointed by such a notion, because it means that all the problems you have to deal with today will still be there for you to deal with on Monday. While the idea of a “cosmic reboot” instantly eliminating all the world’s problems and sorting out the good from the bad in a grand gesture of divine judgement might appeal to a great many people, I suspect that God’s plan for you won’t be so easy to complete.

I’m no Bible scholar, but God’s plan, I believe, is more focused on teaching you how to work through problems and discover who you really are. Destroying the world deprives people of the ability to finish their “life tests,” if you will. At least that’s my take on all this, but since I don’t know the mind of God, I could of course be completely wrong. (I suppose we’ll find out in about 48 hours…)

Why am I talking about all this? Some prophecy scholars insist this Saturday (or Sunday, depending on the Jewish calendar definition of when a new day actually starts) will bring about a cosmic cataclysm that will rain down fireballs across much of North America, punishing the United States for being the abortion murder headquarters for our world (among other sins). It’s also being predicted that a mysterious tenth planet — Nibiru or “Planet X” — will appear, and possibly throw Earth out of its orbit, or achieve other various outcomes that are being hotly debated on the prophecy circuit.

To get a taste of all this, check out this video trailer of the wildly popular online documentary ‘The Sign” (and watch the full documentary below).

I’m not a Bible scholar (nor an astronomer), but I highly doubt a whole new planet is going to be observed in the sky this coming weekend. It would sure make for interesting times if it did, but I have a sneaky feeling that next week is going to be a whole lot like this week, complete with all the mainstream media fake news, political bickering, pharmaceutical poisoning, environmental destruction, corporate lying and GMO seed proliferation that we see every week these days. The evil world in which we’re living right now, I suspect, is going to be just as evil come next Monday. Prepare to deal with the real world after this weekend, in other words, because it’s very likely still going to be here.

I’m not saying, by the way, that those who warn of humanity’s demise are wrong or deceptive. Indeed, I agree with them in noting humanity’s destructive ways, and I have no doubt that human civilization is on the path of total collapse and self-induced obliteration. I just don’t think it’s going to happen this Saturday. In my view, even well-meaning people can misread signs. Perhaps the constellation alignments are real but only indicate the start of a long, drawn-out era of destruction. Perhaps Saturday is the beginning of “20 years of humanity’s slow suicide” or something like that.

It’s fascinating to read scripture and study the constellations and prophecy, and there’s no question that lots of interesting things are happening among the planets and stars. However, there have been so many date-specific predictions of cosmic doomsday that failed to come to fruition over the last few years that it’s hard to give any of them serious credibility. Yes, it’s true that we humans are destroying our world, but that’s a long-term suicide rooted in human-initiated cause and effect. The destruction of humankind doesn’t require a giant, mysterious planet to appear in the sky; we’re doing a pretty good job of destroying our world without cosmic intervention.

In other words, from one perspective I totally agree we are headed to a sort of “end times” scenario, mostly from self-induced collective suicide (which is why I’ve called humanity a “Suicide Cult”). Could it all happen this weekend? Technically, space weather events could literally destroy our planet on any given day, including this Saturday. But the likelihood of that happening seems so incredibly remote that I can’t reasonably ascribe credibility to that date-specific prediction.

Here’s my take on all this, in podcast form:

My advice is to plan for the world to continue through this weekend. All your bills will still come due next week, and you’ll need a long-term survival plan to make it through the coming chaos stemming from financial collapse, social unrest and possibly even global nuclear war. None of those events, by the way, require mysterious heavenly bodies or cosmic alignment: They’re things that we humans are stupidly doing to ourselves.

If you want to view the arguments for why it’s all coming to an end on Saturday, watch “The Sign” full documentary here: