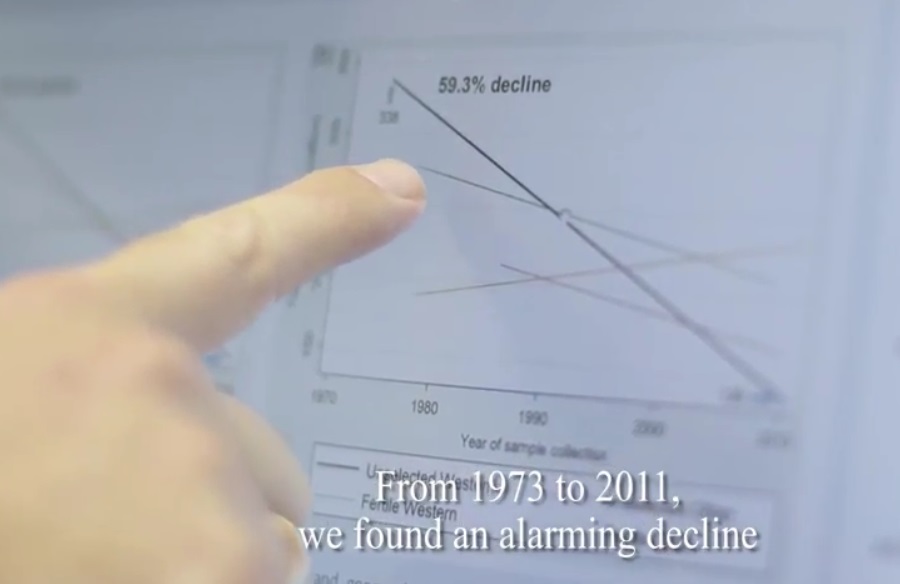 A rigorous new study conducted at the The Hebrew University of Jerusalem and published in the science journal Human Reproduction Update finds that human sperm production has declined 59.3% from 1973 to 2011, trending toward a collapse of human population.

…The researchers found …a 59.3 percent decline in total sperm count, among men from North America, Europe, Australia and New Zealand who were not selected based on their fertility status. These findings strongly suggest a significant decline in male reproductive health that has serious implications beyond fertility and reproduction, given recent evidence linking poor semen quality with higher risk of hospitalization and death.

The causes of the decline have been widely linked to chemical exposure, especially from agricultural chemicals like atrazine that are “chemical castrators” of men. These chemicals cause “feminization” of males, leading to hormonal disruption and sperm population decline. That decline, researchers found, is accelerating in western nations like the United States and could lead to a collapse in human population. Although this was not the focus of this particular study, the same chemicals causing this plunge in sperm production may also be increasing non-male gender expression in biological males, leading an increasing number of biological males to pursue transgender surgeries or lifestyles. This biological fact remains adamantly denied by the anti-science political Left in America, which pursues the “magical science” narrative that transgenderism is solely a “choice” and cannot be influenced by chemical exposure. Yet every biological scientist and chemist in the world knows that chemical exposure alters biological function in humans. In fact, the very process of medical gender transition from a biological male to a female involves chemical castration using hormone-disrupting prescription chemicals such as Cyproterone.

The common food packaging chemical BPA is also widely known to be a hormone disrupt and estrogen mimicker. Those who insist that choice alone can override the laws of chemistry and genetics are living a delusion (Bill Nye, anyone?). Biological sex expression is determined by genes and chemistry (including chemical exposure), not by wishes and hopes.

Environmental exposure to such chemicals is irrefutably a significant vector for sperm decline among men in western nations. As explained by the researchers:

While the current study did not examine causes of the observed declines, sperm count has previously been plausibly associated with environmental and lifestyle influences, including prenatal chemical exposure, adult pesticide exposure, smoking, stress and obesity.

Here’s the video from The Hebrew University explaining this sharp drop in sperm production: