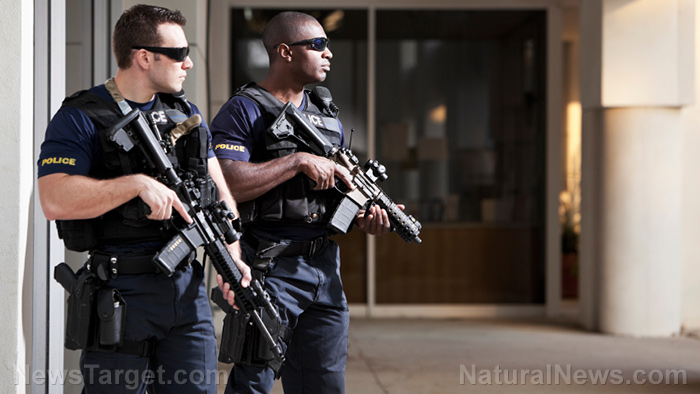 As Americans awakened to news of the horrible mass shooting that unfolded in Las Vegas Sunday night, in which a deranged killer fired on thousands of people with automatic weapons from the 32nd floor of the Mandalay Bay Casino and hotel, the sick, the twisted, and the losers were already politicizing it on social media.

The author of that filth, “Ann #TheResistance” apparently deleted her account afterward, because when we and others attempted to contact her, we got a notice that the page no longer exists.

Here is a screenshot of her initial tweet, however: 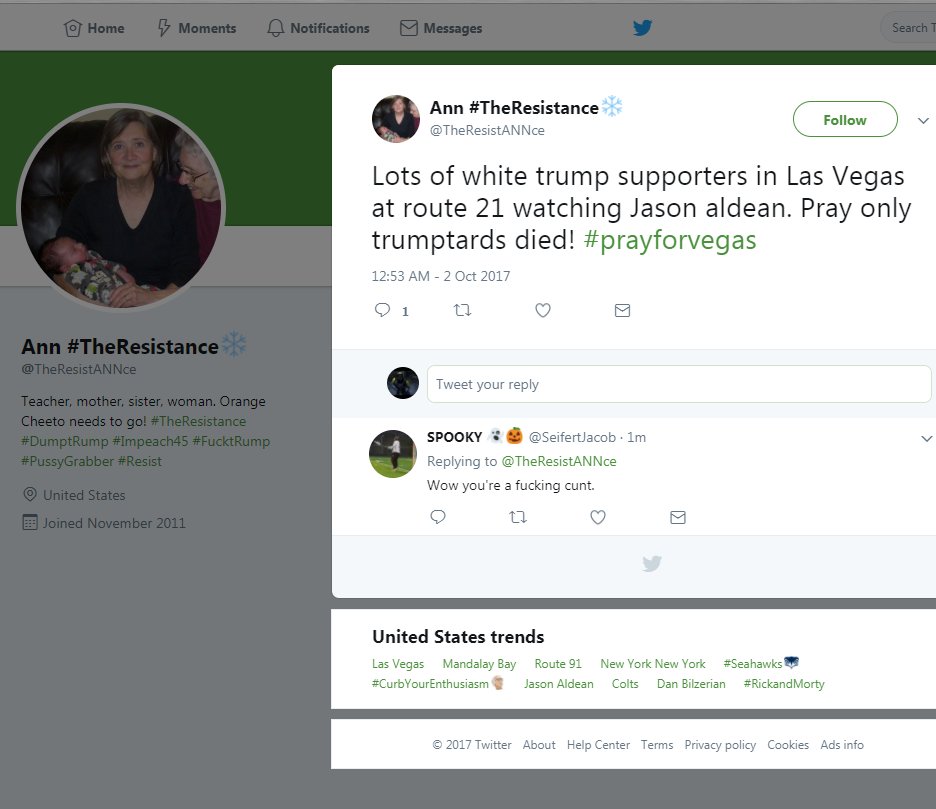 “@TheResistANNce why did you delete your account? Didn’t want people to see the things you wrote to protect your job?.. As a teacher no-less,” wrote someone named James Simpson.

@TheResistANNce why did you delete your account? Didn't want people to see the things you wrote to protect your job?.. As a teacher no-less. pic.twitter.com/RJJlMu3JL4

Another sicko called “BB19” wrote, “It’s country music so they must be trump supporters its karma for Puerto Rico.”

Which elicited this response: “I just woke up and this is one of the first thing [sic] on Twitter.”

“Dear Lord. I hate this world we live in,” wrote another.

Another wrote that the “mainstream” media was already politicizing the incident.

“I know,” Hooter 06 wrote in reply. “NBC already politicizing this. Should be concentrating on fatalities and injured. Sad.”

M. Mahone blamed the other side. “Of course they will say that. It s [sic] always our fault. It s [sic] another nut. Just like the libs. Extremes on either side is bad.”

The Trump hate continued, however, with tweets like, “Will Trump and NRA supporters dedicate his next golf tournament trophy to victims of Las Vegas shooting? #enough,” “In Las Vegas, another #Trump Fan … NOT an immigrant or Muslim or Liberal, just a ‘good ole boy’ .. does his thing!” and, “Can’t wait to hear Trump say there were decent people on both sides of the Las Vegas shooting.”

But sadly, there is more. The gun control lobby was also up and at it early Monday morning, as social media users noted, essentially dancing on the graves of the dead to push their narrative — before anyone even has all the facts about what led the alleged shooter, 64-year-old Stephen Paddock of Las Vegas, who was white, to embark on his rampage. (Related: 50-plus killed in Vegas shooting as sniper rained automatic gunfire down on concert-goers.)

“Bodies are still warm and the #GunControlNow crowd is already standing on them to promulgate their fascistic agenda. Heartless opportunists” tweeted someone named Elliott Hamilton.

He was responding, in part, to Shannon Watts, founder of Moms Demand, a gun control organization. She tweeted, “Today is the day we must talk about America’s gun violence crisis. Today because last night in Las Vegas more than 50 people were murdered.”

And: “Americans should be able to go to concerts, night clubs, elementary schools and movie theaters without worrying about gun violence.”

Americans should be able to go to concerts, night clubs, elementary schools and movie theaters without worrying about gun violence.

And right on cue like clapping seals, leading Democrats in Congress also called for more gun control — before anyone knows anything about the shooter’s motivations (as if they matter, when it comes to the Constitution).

They were led by two-time presidential loser Hillary Clinton, who wrote, “Our grief isn’t enough. We can and must put politics aside, stand up to the NRA, and work together to try to stop this from happening again.”

Our grief isn't enough. We can and must put politics aside, stand up to the NRA, and work together to try to stop this from happening again.

So, for Clinton politicizing a tragedy is “not about politics.” Unreal.