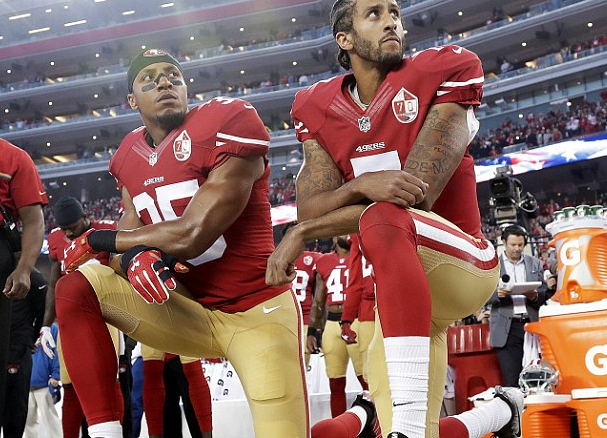 If you are someone who doesn’t agree with the far-Left in America, it’s getting so that there is nothing on television or in the movies that you can watch without being blasted with their agenda.

As the new NFL season began with pre-season games in August, protests of the National Anthem and the American flag that started last season with former San Francisco 49ers quarterback Colin Kaepernick spread to each team, as players protesting — something bad about their country — either took a knee during the playing of the anthem or sat on the bench. The disrespect has outraged fans and even caused Vice President Mike Pence to leave a game in Indianapolis before it began on Sunday.

Now Hollywood libtards are projecting those protests and the supposed “social injustices” they are meant to highlight into other entertainment realms, including one of its longest-running and most successful franchises: Star Trek.

As reported by Truth Revolt, the cast of “Star Trek: Discovery,” the latest iteration of the decades-old franchise, jumped on the NFL kneeling bandwagon after one of the show’s stars, Jason Isaacs — who regularly blows up his Twitter feed with anti-Trump rantings — tweeted, “If I could take one knee on the bridge [of the make-believe starship] I would.”

So another star, lead actress Sonequa Martin-Green, posted a pic on Instagram of the entire cast doing that very thing.

Needless to say, there were more than a few comments from fans of the show (and of the Star Trek franchise in general) who were not amused, not pleased, and no longer fans. (Related: George Clooney just donated $1 million to a radical HATE group that spreads hatred and false accusations worldwide.)

“I hope the ratings bomb as this alt-left Anti-American group shows disrespect for all the American Heroes. Stand up you disrespectful pieces of crap #MAGA,” wrote user “Danny___Chase.”

“Have been a Star Trek junkie since childhood. I will not watch ur show. #MAGA,” wrote “scottbaron2427.”

“Pathetic this is proof hollywood is cancer, hollywood and major sports should stay out of politics what is ‘taking a knee’ supposed to represent? Yes you have a right to ‘take a knee’ but is it worth it? Disrespecting those who died fighting for your rights, or those who came back injured beyond repair?” wrote “weegie_bhoy.”

There’s no question some of the respondents were bots or trolls, but it’s just as likely some of the thousands of “likes” the post got were bots as well. The point is, the vast majority of the country does not agree with deeming the National Anthem and the American flag as approved vehicles of protest.

“Living in the Hollywood bubble, actors seem to forget that they rely on people of all different values to tune in. Or maybe they just didn’t want to be outdone by The X-files cast when it comes to virtue-signaling in space. It’s a tough market,” Truth Revolt noted.

“How brave of these Hollywood stars to come out publicly as leftists! Congratulations on going along with the approved opinion of nearly everyone else in your bubble.”

Many conservative actors in Hollywood have reported being blackballed by directors and producers over their political views because most of them are to the Left of Joseph Stalin.

Over the summer a number of movies that were supposed to be “blockbusters” turned out to be duds: Box offices in sum were down 12 percent, and while technology — streaming, more viewing choices, etc. — had some effect on the downturn, Tinsel Town’s extreme Left-wing political views in the age of Donald J. Trump no doubt added to the slump.

As for the NFL, a recently released shock poll found that the league’s core group of fans is down 31 percent, and the game is now the least-liked professional sport — quite a fall from being king of sports and ratings for years.

Owners are beginning to get the message. As The National Sentinel reports, Miami Dolphins head coach Adam Gase has implemented a rule that all players must at least stand for the anthem. And Dallas Cowboys owner Jerry Jones said yesterday that if anyone on his team kneels or sits in disrespect of the anthem, they won’t play.

Americans can punish Hollywood for its disrespect of our country the same way NFL fans are punishing the league: By staying away and spending our money elsewhere.