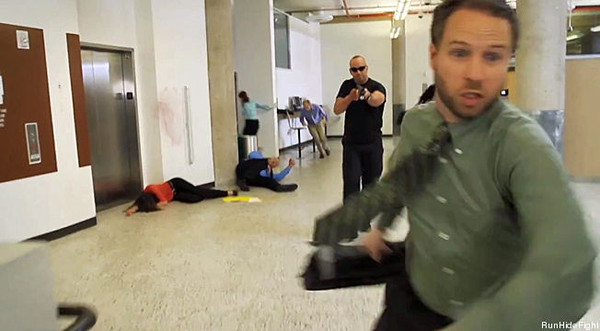 Despite what Left-wing media, entertainment, and political hacks tell you, mass shootings are not common, do not occur every day, and are not the number one public safety threat in America.

That said, what took place in Las Vegas a few days ago is something that is too frightening for most people to fathom. Even people who have combat experience get rattled by the sound of gunfire, especially automatic gunfire, because for the vast majority of people it’s just something you can never get used to.

Still, it’s a dangerous world out there and as horrific as Stephen Paddock’s act of mass murder was, we’ve not seen the last such attack, unfortunately. Whether it is a crazed gunman, as it appears to be the case with Paddock, or a terrorist, there will be more incidents.

As noted by Steve Sheldon at Townhall.com, while there is no “one size fits all” solution to surviving in a mass shooting situation, especially the Las Vegas incident, where the shooter “held an extreme tactical advantage over his victims and those who would defend them” from his 32nd-floor perch in the Mandalay Bay Casino and Hotel. Nevertheless, “the fundamentals of survival remain.”

Before discussing tactics, Sheldon notes there are certain facts that everyone must be made aware of. First and foremost, if you find yourself in the middle of an active shooter incident, if you yourself don’t have a gun for self-defense then you’re nothing more than a potential target, so act appropriately.

Also, it is a near-certainty that in such situations, both you and the attacker have never done anything like this before. While some shooters have at least had shooting experience, if you have not, then you’re just as liable to become a victim as the unarmed person next to you. So if you’re going to be armed, learn how to shoot what you’re carrying. (Related: Survival 101: How to find effective cover in a mass shooting.)

Further, don’t let Hollywood form your thinking about how guns and bullets behave in real life. Guns jam; barrels become too hot; bullets easily pass through walls, glass and even car doors — but they can only go through so much material before they lose energy. Most targets are hard to hit, especially when they’re moving. Bullets do not cause things to “explode,” as evidenced by the fact that the Vegas shooter fired at, and hit, massive tanks of jet fuel without further incident.

Here are more facts on how to survive such incidents:

— Time and distance are always to your advantage, so gain as much of both as you possibly can.

— There are three kinds of targets presented to shooters: Stationary, moving, and those that cannot be engaged for any other reason (can’t be seen by the shooter; behind sufficient cover; etc.).  Move quickly to make yourself as hard to engage as possible. Find cover; stay low. In the open, move fast.

— There is no “safer” time to move. The time to move is only right now, immediately. Don’t wait.

— The situation will be loud, chaotic, and like in Vegas, very bloody. Ignore all of that and get yourself to safety as quickly as possible. You must overcome paralyzing fear or you make it much more likely you’ll die.

— Always remember: Mass shootings most often take place in gun-free zones so if you don’t want to put yourself in a position to be involved in a mass shooting, don’t go to a gun-free zone.

— If you’re in close proximity to a shooter, as in the same room, two things are going to happen: You’re going to be wounded or killed. Better to take the least bad of two poor choices: Die in place or take a chance at living and be wounded. (Remember, not all gunshot wounds result in death, as evidenced by the hundreds who were wounded, not killed, in the Vegas attack.)

— If you can’t see the shooter, chances are excellent he/she can’t see you, either, so move and move quickly to put time and distance between you.

“People who survive a gunfight fall into one of two categories: those who were lucky or those who outmaneuvered their opponent through planning, training and execution. Be the latter,” writes Sheldon.