Health Ranger: To end human suffering, we need to fight for LIBERTY 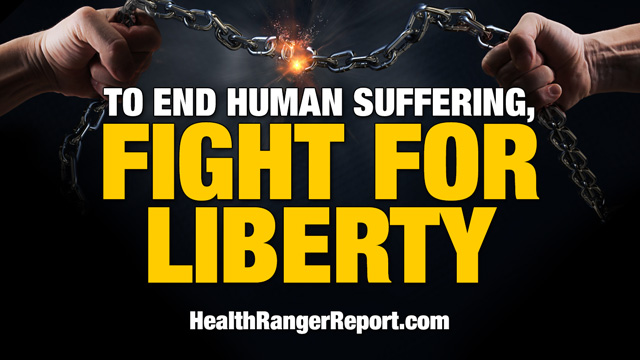 If you want to end human suffering, the leftist liberal approach of giving everybody more and more handouts is a TRAP. The real solution to ending human suffering is an expansion of LIBERTY.

The real solution, says Natural News founder/editor Mike Adams, the Health Ranger, is to fight for individual liberty and an end to insane big government policies that crush human freedom.

He should know. Adams has long been an advocate for human freedom. Also, he’s the publisher of several websites that all promote liberty and freedom for all:

In a recent podcast, Adams noted that “you don’t help people by giving them money, and you’re not doing anybody any good by writing checks” to big non-profit organizations like the American Cancer Society.

“If you really want to help people in the world, fight for liberty,” he added.

That is key because the vast majority of human suffering in our world today is due to a lack of freedom. He’s right; the bulk of humanity currently lives under the yoke of oppression: Dictators of communist or socialist countries suppress freedom and keep their people in line through intimidation, imprisonment and death.

But even in supposedly “free” countries like the United States and democracies in Europe, much of our lives are heavily regulated. Take Obamacare, for example: Though President Trump has recently gutted a huge portion of the law, many of its mandates and rules remain, meaning that Americans don’t really have complete freedom to, say, try experimental drugs or alternative medical treatments. In most states, cannabis remains illegal, while children in other states are routinely injected with vaccines containing mercury.

“Probably a million lives a year could be saved if we could just tell the truth about natural medicine,” Adams noted, “and nutritional cures, and disease prevention, and treatment with herbs.”

“So you see,” he continued, “while you’re giving money to these non-profits and you think you’re helping…you’re not solving the problem. All you’re doing is keeping the non-profit alive that want the disease to continue” so they’ll keep getting donations.

Adams noted in his podcast that he most certainly does support some regulation of industry and understands that a civil society must have rules of behavior in the form of laws, and that includes common sense environmental regulation. But he also realizes that too much regulation strangles freedom and destroys liberty.

“There is a role for regulation, but there is a point where it goes ballistic and gets too crazy and out of control,” he said. “That’s where we are now.”

Society, in order to thrive, should be conducive to the creation of businesses and commerce, which in turn creates jobs for people. The business environment should be such “where they actually have some chance of earning a profit,” says Adams, “so that when they invest money” they might actually earn a profit at some point “instead of getting taxed to death, which is where we are now.”

Adams, himself a businessman, said that if he were just starting out today, because of the heavy freedom-shunting regulatory environment, he would not launch any ventures. “The cards are stacked against you to such an extreme degree, there’s almost no chance that you can get ahead in this society,” he noted.

There is so much more Adams has to say on this subject. Listen to this common-sense podcast below or click here and listen at the HealthRangerReport.com.