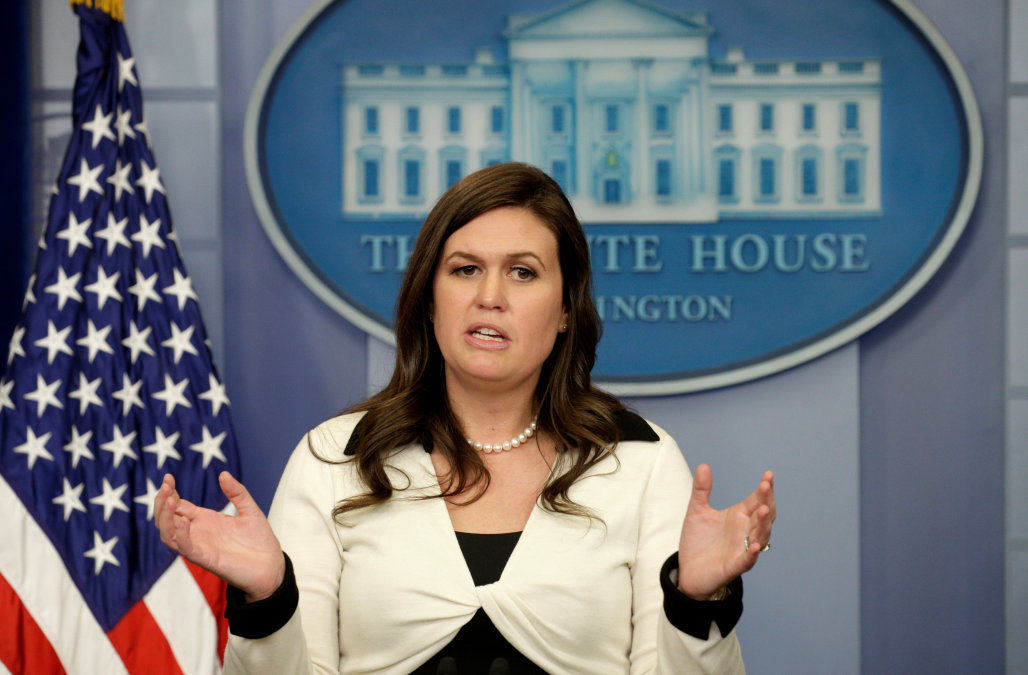 Liberal logic: If a conservative makes a joke about or insults a woman in any way, it’s sexist. However, if a liberal columnist makes fun of a woman for her weight and the way she talks, it’s perfectly acceptable and not at all an example of sexism.

David Horsey took a shot at Sanders’ physical appearance, arguing that she “looks more like a slightly chunky soccer mom who organizes snacks for the kids’ games.” In an article that was published this past Wednesday, Horsey wrote, “Rather than the fake eyelashes and formal dresses she puts on for news briefings, Sanders seems as if she’d be more comfortable in sweats and running shoes.” He added, “Yet, even if Trump privately wishes he had a supermodel for a press secretary, he is lucky to have Sanders.”

Frank Bruni decided to take a different approach, attacking Sarah Sanders not for her physical appearance, but for her southern accent. Bruni wrote that Sanders is “serving a function other than communication, which turns out not to be her forte.” Bruni continued, “To listen to her pronounce ‘priorities’ is akin to hearing the air seep out of a flat tire, and she leaves half of the consonants on the curb.”

To be fair, David Horsey did eventually apologize for his remarks, stating that they were insensitive and did not meet the standards of the Los Angeles Times. But apology or no apology, the fact of the matter is that Horsey still said disgusting things about the White House press secretary, and simply saying “I’m sorry” doesn’t exactly make everything okay.

Earlier this month, failed Democratic presidential nominee Hillary Clinton was interviewed by radical leftist Fareed Zakaria on his show GPS. At one point during the interview, Hillary argued that sexism and misogyny are endemic in American society, which is an odd assertion considering the fact that if we really did live in such a sexist country, chances are a woman wouldn’t have gotten so close to becoming the leader of the free world. What has Hillary Clinton – the fearless warrior for women’s rights – said about David Horsey and Frank Bruni’s comments on Sarah Sanders? Absolutely nothing.

Tim Kaine, Hillary Clinton’s running mate, has also tried to position himself as a staunch defender of women’s rights in the past. Just days ago, Kaine published a guest post in Esquire, in which the Democratic senator from Virginia urged men to “step up” and combat rampant sexism in America. How exactly has Tim Kaine “stepped up” and denounced David Horsey and Frank Bruni for their sexist comments on Sarah Sanders? Has he said anything at all on the matter, or has he decided to remain silent? (Related: Here is a list of everyday words that the liberals now claim are sexist.)

The truth is, almost every single liberal democrat you can think of – from Bernie Sanders to Barack Obama to Nancy Pelosi to Chuck Schumer – has spoken out against sexism at least once during their political careers. The reality, though, is that these people are only concerned about sexism when one of their own is the victim. When a conservative like Sarah Sanders becomes the victim of sexism, however, it’s of no interest to the left and it gets swept under the rug as if it never happened. (Related: Where is the outrage from the left as the hashtag #RapeMelania trends on Twitter?)

Let’s just be blunt about it – to the liberals, the word “sexism” is just another tool that they use to attack and discredit the conservative right. And frankly, that is something that all women, regardless of political affiliation, should resent.