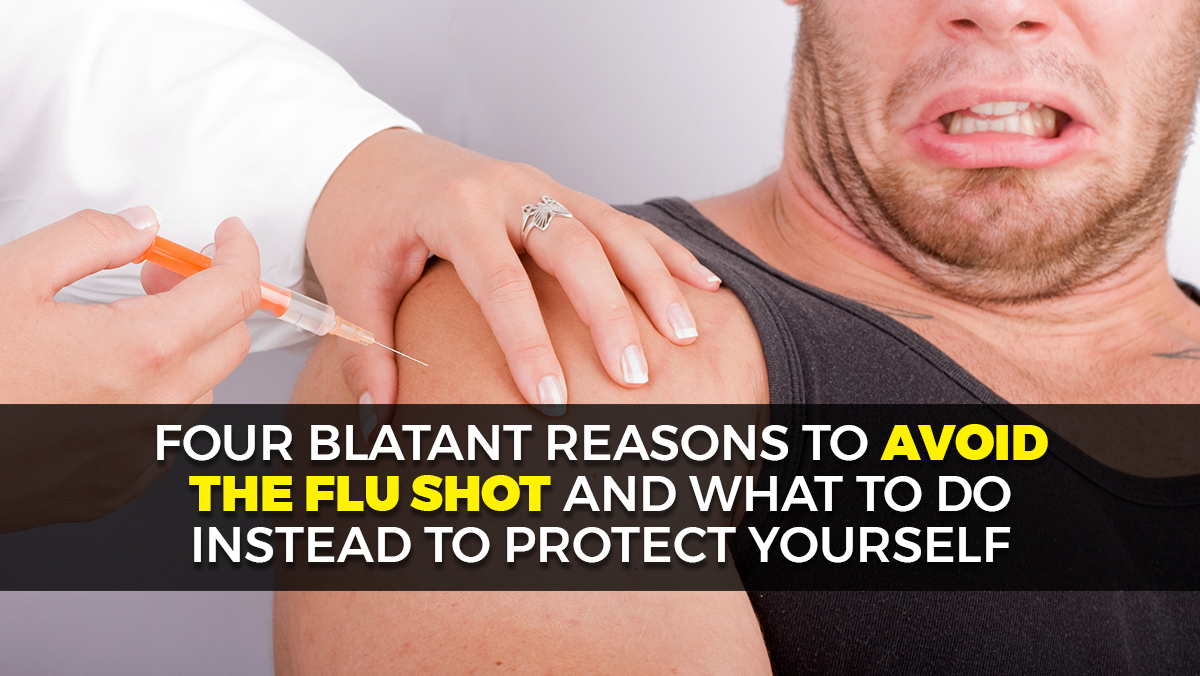 It’s that time of year again where the weather cools down and doctors, nurses, and pharmacies inject the fear of the flu into your mind so you will drive directly down to your local clinic and willingly let them inject you with the flu.

Sounds kind of silly when you think about it. By getting the flu shot you have essentially agreed to have a strain of the very virus you are trying to avoid, injected directly into your body.

What makes this even more of an exercise of cognitive dissonance, is that these flu shots contain adjuvants that facilitate the development of not just the flu, but several other disease processes. You are aware that toxins, no matter the amount, are partly responsible for virtually all the diseases experienced today, right? So, if you put your thinking hat on, it makes sense to avoid them at all costs, at least what you can see and know about, right?

If you’re nodding your head yes, I’m glad we are on the same page. Let’s now move on to more stunning evidence on why you should avoid the flu shot, and what you should do instead to protect yourself.

Flu shots are not proven to actually work

If you read the indications and usage verbiage on the FLULAVAL vaccine, you’ll find the following admission:

“…there have been no controlled trials adequately demonstrating a decrease in influenza disease after vaccination with FLULAVAL.”

That’s kind of a kick in the pants, isn’t it? Getting injected with a flu virus strain and toxic adjuvants, and there’s no trials actually showing it works? After reading this, submitting yourself to a flu shot (if not forced) is an automatic application for the Darwin Awards.

Flu shots are not proven to be safe

It would be nice to ride the rainbow on a pet unicorn named Bliss and pretend there are no safety issues with the flu shot, but in this case, ignorance and bliss do not go together. By their own admission on the FLUAVAL insert, you can read in black and white:

“Safety and effectiveness of FLULAVAL in pediatric patients have not been established.”

Furthermore, the insert also goes on to state:

“FLULAVAL has not been evaluated for carcinogenic or mutagenic potential, or for impairment of fertility.”

The flu shot was also proven to be the most dangerous vaccine of them all when it was reported in June of 2014, that 70 percent of all vaccine injury cases (55 of 78) were settled for the flu shot, including one death.

Flu shots contain toxic adjuvants, including arguably the most toxic substance to humans on the planet

So, while you are being injected with the flu virus, there are any number of other dangerous toxins accompanying it, notably the most obnoxious toxin the body has ever been commonly forced to deal with — mercury.

This toxin shows up in the ingredients as thimerosol, a mercury derivative, and is added as a preservative. Each dose contains 50 mcg of thimerosol, which is an extremely dangerous level of mercury for the body.

How dangerous? Tests conducted via ICP-MS using a 4-point mercury calibration curve for accuracy, found that there were 51 parts per million of mercury in the FLULAVAL vaccine, which is 25,000 times the maximum contaminant level of inorganic mercury in drinking water set by the EPA. [Learn more about mercury at MercuryScienceNews.com.]

As a comparison, this is 100 times higher than the highest level of mercury ever tested in contaminated fish. Also, keep in mind that these vaccines are injected into the body, bypassing several detoxification systems that would be in place when eating fish. This makes the injected toxicity by the flu shot exponentially more dangerous.

If that isn’t punishment enough, each dose also contains residual amounts of ovalbumin, formaldehyde (known neurotoxin), and sodium deoxycholate from the manufacturing process.

Flu shots have toxic side effects

On the FLULAVAL vaccine insert, you can also see a section that lists reports of side effects of actual users. Some of those adverse effects experienced after the flu shot include:

This isn’t even the complete list. Are you really interested in subjecting yourself to something that reports these as side effects? Please say no. There’s a better way. 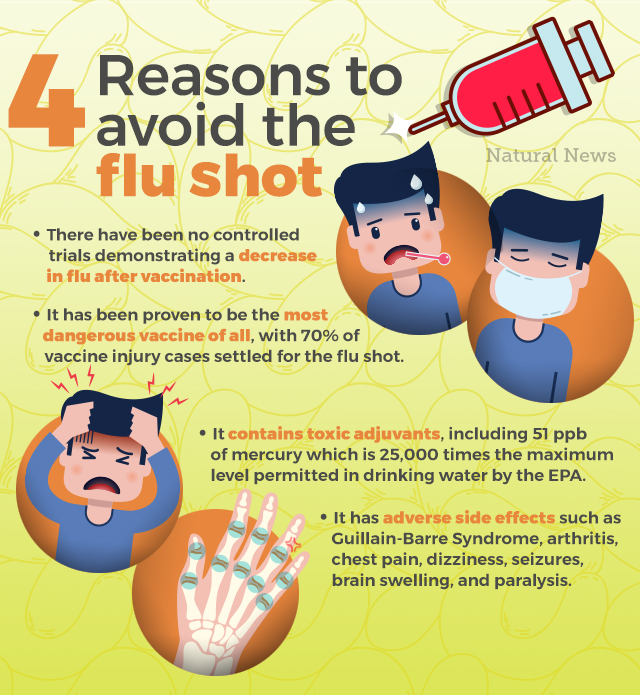 What works better for building the immune system?

At this point, it should be plenty clear that the flu shot is not as effective, safe, and free of side effects as you may have been led to believe. Unfortunately, many people don’t know how to properly build their immune system.

So what do you do? Here’s some simple but effective advice.

First of all, in times when the immune system is challenged, it becomes more important to avoid foods and beverages that can put more stress on it. This means largely or entirely avoiding sugar, processed foods, conventional dairy, gluten, soy, and alcohol.

For supplementation, you will want to provide extra immune system and liver support. In this realm, the Health Ranger’s Nutrition Rescue Buffered Vitamin C, Turmeric Gold, and Reishi Mushroom are excellent options to explore. Probiotics, vitamin D, and zinc should also be considered.

If you are forced to take the flu shot, these recommendations are even more important to support the body’s natural elimination processes. Make sure to focus on a good MSM, zinc, turmeric, and chlorella a few days before and after to support this natural process. Seeking Health Optimal MSM and Clean Chlorella are great options.

Finally, for a more complete guide on how to avoid the flu naturally this year, read How To Optimize the Immune System Naturally.