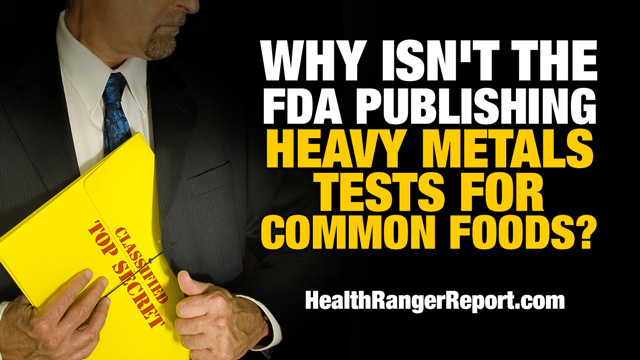 As he was finalizing the expansion of his new food science laboratory recently, Natural News founder/editor Mike Adams, the Health Ranger, increasingly wondered, “Hey, how come the FDA isn’t testing for heavy metals in foods and then telling the American people what they found?”

It’s a legitimate question, Adams insisted in a recent podcast, and one that should be of intense interest among the general public.

“Why isn’t the FDA testing off-the-shelf food products for heavy metals, pesticides, herbicides, benzenes, parabens and other toxic chemicals? Isn’t this all about Public safety? Why does it come down to a private citizen like me taking on this task?”

“The answer, of course, is because the FDA is far more interested in protecting the profits of the processed food industry (and all its toxic poisons) than protecting the health of families and children who eat all that toxic food,” he said.

Adams is a food science researcher, as well as the science director at CWC Labs, which he opened recently and where he can test foods and water for all kinds of toxins. He is also the author of “Food Forensics: The Hidden Toxins Lurking in Your Food and House You Can Avoid Them for Lifelong Health.”

As a private organization, Adams believes he is having a major impact on increasing peoples’ knowledge of the foods they are consuming. But he also says that the U.S. government, which takes in (and spends) trillions of dollars per year, has a much bigger budget and a larger platform to conduct food research and then publicize results.

Instead, however, “the government [is] supporting the craziest science imaginable, studying bizarre things” that have no impact on our daily lives.

“We’re in a time of runaway diabetes, heart disease, cancer, Alzheimer’s and dementia,” he said, noting that the rise in neuro-degenerative diseases was particularly acute.

And what causes dementia and similar conditions? Toxic metals — many of which are found in the foods we eat, the Health Ranger said.

While it’s unclear right now what level of heavy metals toxicity may be causing so much dementia and Alzheimer’s, Adams says that it is in large part due to the fact that “we’re not studying it.”

“But,” he continued, “we know it’s a contributing factor.”

Later in the podcast, Adams said far too many Americans today seem much more interested in the latest fashion or entertainment figure controversy than what’s in their food, perhaps because too many people are already brain-damaged by heavy metals toxicity.

“Maybe we’re too late!” he said. “They’re too far gone to realize they need to clean up their food” in order to halt the progression of degenerative brain damage.

Still, he said, in order to prevent such damage from occurring to future generations, he suggested a “Manhattan Project”-style research effort to study heavy metals toxicity in foods, the amounts found in them, and the overall effect they are having on the population. And he volunteered himself and his lab for the project.

Besides foods, Adams also suggested that “we look into what dietary supplements actually contain,” along with protein powders and other substances.

“Why is it that people can’t learn any more in universities and colleges and voters can’t do basic math” so that they “understand economics?” he said, hinting that, of course, the answer may very well be due to toxicity of the foods we are consuming.

Adams notes that there are other food-related factors contributing to our overall decline in mental and physical health in addition to heavy metals, but adds, “Shouldn’t we find out?

The Health Ranger has much more to say on this subject. Listen below or click here for the complete podcast. Also: Learn more about clean food at Natural.News or Fresh.News.