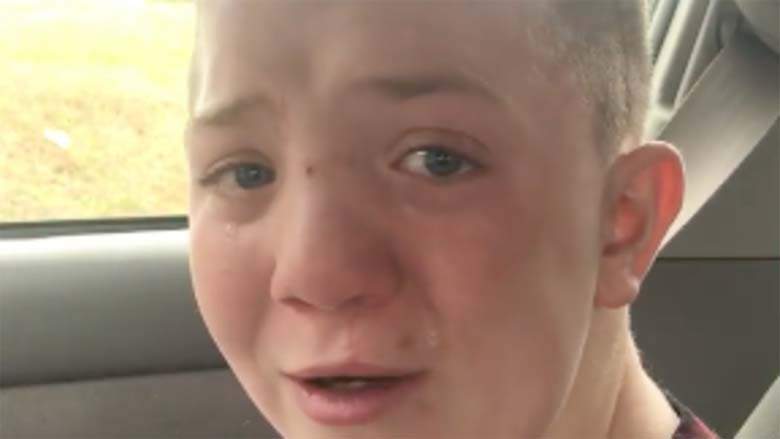 While social justice warriors like to hold themselves up as the great defenders of everything fair and equal, the truth is that these people are just a bunch of malcontents who can never seem to find joy or happiness in anything. Normally, we would look past this sad behavior – that is, of course, if they weren’t destroying the very fabric of American society.

Recently, a video of a young man by the name of Keaton Jones pleading for people to stop bullying went viral, compelling celebrities, athletes and Americans of all beliefs and backgrounds to rally behind him. In the video itself, Keaton recalls what happened to him earlier that day in school, and asks a question that millions of people would like to know the answer to: Why do bullies think it is okay to pick on others?

“Why do they bully? What’s the point of it?” Keaton asks in the video. “Why do you find joy in taking innocent people and finding a way to be mean to them? It’s not okay.” At one point, Keaton’s mother, who is filming the video, asks her son to talk about what happened earlier that day in the lunch room. (Related: A study has found that food allergies in children is linked to bullying and abuse.)

“What’d they do to you at lunch?” his mother asks. “Poured milk on me and put ham down my clothes,” Keaton replies. The teary-eyed boy goes on to say that people shouldn’t be bullied just because of the way that they are: “People that are different don’t need to be criticized about it. It’s not their fault. If you are made fun of, just don’t let it bother you. Just stay strong, I guess.” (Related: Bullying hurts children in the long term.)

With so much courage and wisdom coming out of the mouth of such a young boy, it’s easy to see why the video went viral and gained the support of several prominent celebrities and athletes. Sadly, and unbelievably, not everyone was quick to support young Keaton Jones.

Not long after the video was published, The Root, which is essentially an online media outlet that focuses on social justice issues and on how “racist” and “evil” white people are, came out to criticize not just the emotional anti-bullying plea, but also the mother who recorded it. (Related: For more news on moronic and hateful leftists, visit libtards.news.)

“Before you parade your child on social media, sobbing about being bullied, and then have celebrities rally behind you, you might want to clean up your own racist social media posts,” wrote the website’s Deputy Managing Editor Yesha Callahan. This vile, repugnant columnist was referring to pictures that Keaton’s mother had posted on her social media page, which included photos of the Confederate flag and a patriotic banner that read, “I stand for the flag,”

Oh, the horror. How racist and bigoted of her.

In addition to the bullies who poured milk on Keaton in the lunch room and dumped ham down his clothes, it appears that this story has yet another bully that has not been reported on nearly as much – Yesha Callahan of The Root. For her to take a story that united the entire country around the issue of bullying and make it into a story about “racism” and “whites versus blacks” is absolutely despicable, and quite frankly, she should be fired.

As for young Keaton Jones, Natural News stands with him and wishes him the best of luck with the rest of his education career.