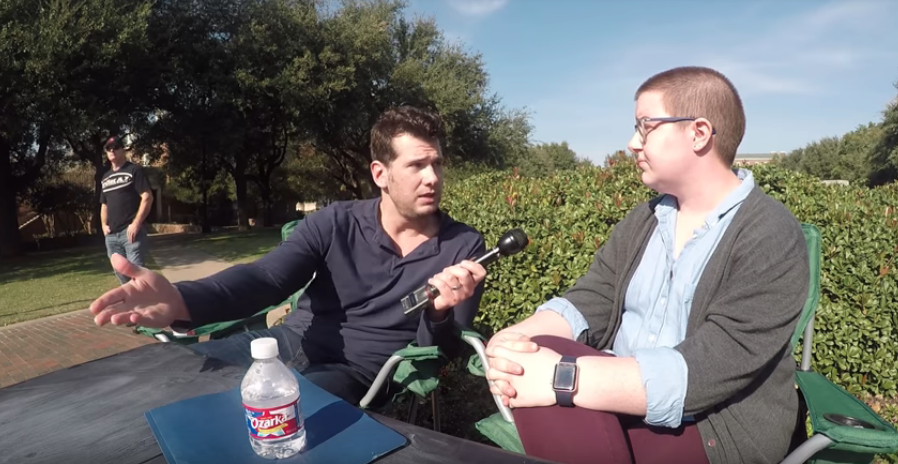 For those who are unaware, conservative commentator Steven Crowder has an incredibly interesting and insightful YouTube series called “Change My Mind,” which features Crowder going to various locations to sit down with individuals on the left and discuss controversial political topics like abortion, hate speech, and the Second Amendment. But the latest installment of Crowder’s “Change My Mind” series, in particular, has a lot of people talking, which frankly is to be expected anytime someone sits down on a college campus behind a sign that reads “There are only 2 genders.”

The 50-minute long episode, which can be viewed below, featured several students trying to convince Crowder that there are more than two genders, and some arguments were certainly more credible than others.

The first student who sat down with Crowder argued, albeit poorly, that there is a difference between sex and gender that society as a whole has to eventually come to accept. Crowder explained that this concept is based largely on “modern gender theory,” and that the idea that there is a difference between sex and gender is not and never has been rooted in science or biology. As a follow-up question, Crowder asked the student if he could tell him how many genders actually exist. “I would say, um – we would say there are two genders being man and woman, and then that there would be people that don’t accept either of those, and that would be an X or in a non-identifying category,” he replied.

As you can see, the question itself regarding how many genders there are was never answered. Crowder was looking for a straightforward answer like “4,” “8” or “22,” and instead he got a long, confusing response that was really irrelevant to the original question. This individual wasn’t the only student that was unable to answer how many genders there are, however. (Related: There has been a huge increase in children being indoctrinated with gender identity propaganda.)

“So how many genders are there?” Crowder asked the next participant. “You can’t put a number on the number of genders because everyone uses different words to classify themselves,” she said, essentially implying that the number of genders in existence is infinite. The problem with this, as Steven Crowder went on to explain, is that people can’t choose to identify as whatever they want and then compel society to address them as such, especially if it means dismissing science and biology in the process, which it does. (Related: Transgenders increasingly want to revert back to their original gender after having surgery.)

Furthermore, the concept of self-identifying itself opens the door for a wide range of communication problems and legal issues. For example, if somebody chooses to self-identify as a bird, would the rest of society be compelled as a matter of law to refer to that individual as a bird rather than a human? And what would happen if the individual that self-identifies as a bird were a pregnant woman? Would doctors be considered bigoted for saying that she will be giving birth to a baby boy or a baby girl rather than laying an egg? It sounds ridiculous, but that’s what happens when you follow the liberals’ line of logic on this particular issue.

As Steven Crowder was trying to relay to these college students was that as uncomfortable as it may make some people feel, there are only two genders: Male and female. There will always be people who were born differently with characteristics of both genders, but these individuals are the exception rather than the rule. As far as the concept of self-identifying goes, there has to be a line drawn somewhere; otherwise, our society will decay before our very eyes.