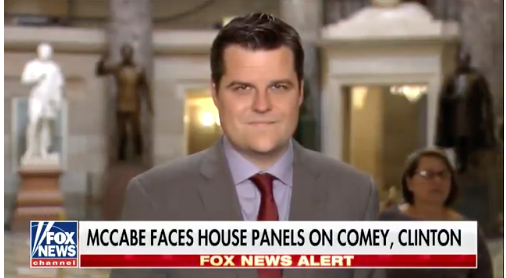 A Florida Republican says that the House Judiciary Committee, of which he is a member, now has email evidence of bias and collusion within the wholly discredited FBI that the so-called “criminal investigation” into Hillary Clinton’s obvious and arrogant mishandling of classified info via her unsecured private email server was tanked on purpose to avoid indicting her.

The fiery Gaetz, who has been like a hound dog tracking down every lead and example of bureau-wide bias in favor of Clinton and against President Donald J. Trump during last year’s campaign, said that the circumstances surrounding the FBI’s alleged ‘investigation’ were marred by “extreme pro-Hillary Clinton bias.” (Related: Discover the truth at Conspiracy.news)

“The Judiciary Committee is engaged in an investigation, particularly as it relates to the handling of the Hillary Clinton email scandal and any potential investigations of the Clinton Foundation and the handling of bribes or other types of improper payments,” Gaetz told the network.

“I can certainly say that my impression after these interviews is that there was extreme pro-Hillary Clinton bias that benefitted her in this investigation and that she received special treatment as a consequence of her candidacy for president,” he added.

“That shouldn’t happen. The law should apply equally to all Americans whether they’re political candidates or not. And so, we need to institute reforms through the Judiciary Committee for more oversight, for more transparency so that this never happens again.” (Related: Gaetz: FBI Dep. Dir. McCabe emails indicate Hillary Clinton got SPECIAL treatment by allies within Bureau.)

Gaetz is only the latest Republican lawmaker to come out and essentially blame elements within the FBI and Obama Department of Justice for being completely in the tank for Hillary last year. They have cited evidence indicating that the so-called “Trump dossier,” which was paid for by the Clinton campaign and the Democratic National Committee, and commissioned by a pro-Democrat ‘opposition research’ firm, was weaponized as legitimate ‘evidence’ to obtain FISA court warrants so pro-Hillary agents and investigators could spy on her rival.

As for Gaetz, he said last month that “we now have evidence” of FBI malfeasance in the investigation of Clinton.

“We now have evidence that the FBI’s investigation of Hillary Clinton did not follow normal and standard procedures,” he said, as reported by The National Sentinel. “The current deputy director of the FBI Andrew McCabe sent emails just weeks before the presidential election saying that the Hillary Clinton investigation would be special — that it would be handled by a small team at headquarters, that it would be given special status.”

In his Fox interview Friday, the Florida Republican said the committee’s next move will be to find out if there was a departure at the FBI from standard policies and “procedures.”

“[O]ur view is we need to find out if whether or not the procedures were departed from,” he noted. “And we have email evidence from Andrew McCabe indicating that Hillary Clinton was going to get an ‘HQ Special,’ a headquarters special.

“That meant that the normal processes of the Washington field office weren’t followed and he had a special. And he had a very small group of people that had a pro-Hillary Clinton bias who had a direct role in changing that investigation from one that likely should have been criminal to one where she was able to walk,” Gaetz continued.

“And so I think that we’ve gotta ensure that that never happens again, that the same processes that would apply to any American would also apply to people who were running for president of the United States.”

Wouldn’t that be a major departure from the lopsided, one-sided “justice” meted out (or not) during the corrupt Clinton and Obama years?