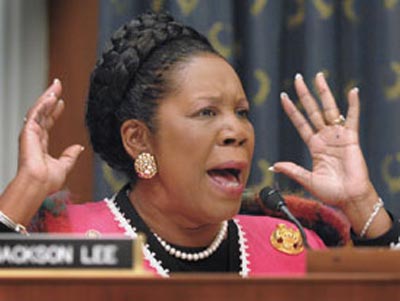 Generally speaking, and in addition to many other things that aren’t healthy for a free society, the Democratic Party today stands for the establishment of a massive entitlement state, whereby the people have a right to everything and the kitchen sink. It should come as no surprise, then, that many congressional Democrats themselves feel as though they are entitled as well.

Such was the case for Democratic Congresswoman Sheila Jackson Lee of Texas, who last month forced a passenger to give up their first-class seat on a United Airlines flight from Guatemala. The frustrated passenger took to social media to explain what had happened: “I was the last passenger on the plane,” she wrote. “A Texas congressman, a nice guy, sat down next to me. He said he was glad I had made it on the flight. I showed him my boarding pass with my seat, 1A, printed on it. He said, ‘You know what happened, right? Do you know who’s in your seat?’ I said no. He told me that it was Jackson Lee, a fellow U.S. congresswoman who regularly does this, that this was the third time he personally had watched her bump a passenger.”

But here’s the ironic part of the story: The passenger that Rep. Sheila Jackson Lee forced out of the airplane seat and subsequently accused of being racist is purportedly a “celebrated photojournalist” who has spent a significant portion of his career documenting human-rights abuse. More specifically, the photojournalist, named Jean-Marie Simon, dedicated much of the 1980s to observing and documenting human-rights violations in Guatemala, during which time the country’s military overthrew the government and hundreds of thousands of Guatemalans were killed.

With all due respect, perhaps Simon should spend some time documenting human rights violations in her own country, where apparently passengers can be kicked out of their airplane seat to make way for an elitist from Washington D.C. It’s also worth noting that it wasn’t as if Simon had cancelled her ticket or did something that violated the previously established terms and conditions at United Airlines; she had done everything right, the seat was legitimately hers, and yet she was forced to make way for a Democratic congresswoman. (Related: Elitists reveal how they really feel about the “peasants” in California as the state devolves into suburban class warfare.)

It is not farfetched to say that the reason why this story, in particular, has so many Americans across the country infuriated is because it is a prime example of the elitist mentality that seems to run rampant throughout Washington D.C., whereby those who claim to represent us feel as though they deserve special privileges and benefits solely because of the fact that they are elected officials. When the Affordable Care Act was passed back in 2010, for example, those who reside in Washington D.C. were exempt from the rules and regulations laid out by the law, while the rest of the country was subjected to them. (Related: U.S. lawmakers secretly negotiated to exempt themselves from Obamacare.)

In order to give you a better idea of who Rep. Sheila Jackson Lee is, it’s worth noting that the Texas Congresswoman was officially named the “meanest” member of Congress. Specifically, Lee appeared on Washingtonian magazines’ “best and worst of Congress” list four years ago in the year 2014 for “winning” the titles of “meanest” and “show horse,” with her employees citing an overwhelming and burdensome workload and harsh criticism. Based on this, is it really that much of a surprise that she would force a journalist out of her seat on an airplane even though the seat was already paid for?