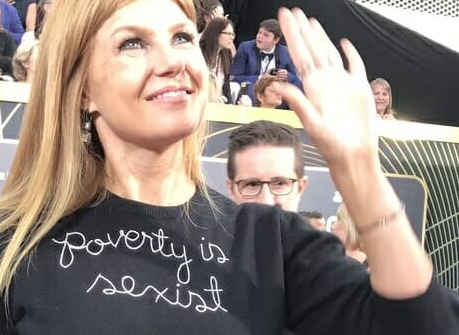 If it’s not sexist, then it’s racist. If it’s not racist, then it’s sexist. Does anyone else feel as though this culture of victimization that the liberals have created is getting just a bit out of hand?

Case in point: At the Golden Globes on Sunday, liberal actress, singer and producer Connie Britton wore a shirt that said “poverty is sexist,” which of course won her much praise from leftists and feminists alike.

Setting aside the sheer stupidity of wearing a shirt like that to an event like the Golden Globes, and despite the overwhelming irony of a wealthy liberal actress complaining that poverty affects her and other women more than her male counterpart, let’s take a look at the facts. Is poverty really sexist against women? According to The Telegraph, the answer is no.

On the contrary, after surveying a total of 3,355 homeless people, the charity Homeless Link found that 71 percent of them were men. Additionally, according to a 2016 SAMHSA report, the homeless population is roughly 51 percent single men and 24 percent single women. So even though Connie Britton thinks that poverty is sexist because it supposedly impacts more women than men, statistics show that far more men end up homeless. Perhaps at next year’s Golden Globe awards, male actors should wear shirts that read “homelessness is sexist against men.”

But why does gender even matter when talking about serious issues like poverty and homelessness? Who really cares if more women live in poverty or that more men are homeless? Shouldn’t the issue be “poverty and homelessness,” and not “poverty and homelessness affect one gender more than the other?” The vast majority of the time, those who seek to link the issues of the day to things like race and gender are only distracting people from the core problem, and ultimately preventing any real solutions to be put in place. (Related: Thought police gone wild: Here is a list of everyday words that liberals call sexist.)

Another example has to do with America’s criminal justice system – why is it that instead of focusing on how we can create safer communities and neighborhoods in general, many politicians (like former president Barack Obama) instead choose to make it about race?

In 2016, during a commencement speech at Howard University, Barack Obama launched into a loud and impassioned rant about America’s criminal justice system, trying desperately to link it to skin color.

“We can’t just lock up a low-level dealer without asking why this boy, barely out of childhood, felt he had no other options,” Obama said at the historically black college. “We have cousins and uncles and brothers and sisters who we remember were just as smart and just as talented as we were, but somehow got ground down by structures that are unfair and unjust.”

Shockingly, Obama then implied that success was based more on “getting lucky” then on things like talent and skill. “And that means we have to not only question the world as it is,” he said, “and stand up for those African Americans who haven’t been so lucky – because, yes, you’ve worked hard, but you’ve also been lucky.”

Many people in this country spend far too much time perpetuating a culture of victimization rather than offering real solutions to the problems we face. That must change, or else nothing at all will improve.