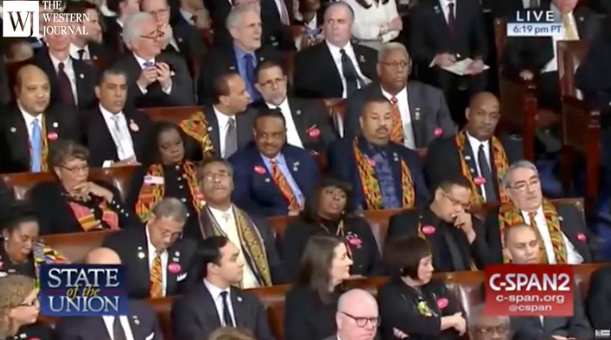 The majority of black Americans, for some reason, identify with the Democratic Party — the party of segregation, of the KKK, of institutional racism. But not all blacks do, and in fact, recent polling data indicate that Trump’s support among the black community has more than doubled since his November 2016 victory.

One black Trump supporter is writer and YouTube star Candace Owens, who was so upset by the way that the Congressional Black Caucus treated the president (and some of his guests) during his State of the Union Address she took to social media with commentary and observations.

And she didn’t pull any punches.

Following the speech, Owens, who is also known as Red Black Pill, made a series of tweets that bashed the caucus and blacks who continue to blindly support the Democratic Party.

“Phew. Turns out it’s not just the triumphs of black people that Democrats hate; It’s America in general,” she said in one.

Continuing, the brash, young conservative noted that members of the caucus who stayed in their seats as nearly all Republicans and a few other Democrats gave the president a standing ovation when he announced that, during his year-long presidency, economic opportunities for blacks have grown substantially. She said that those who sat stone-faced during the ovation “are nothing more than slaves to the Democratic Party.”

“If Obama had announced that black unemployment was at an all-time low, the black caucus would have leapt to their feet and erupted into cheers. Their silence last night proves that they do not hold black interests. They are nothing more than slaves to the Democratic Party,” she tweeted Wednesday. (Related: Democrats are inviting ILLEGAL aliens to the State of the Union; Trump, meanwhile, is inviting American HEROES, illegal immigrant VICTIMS — see them here.)

If Obama had announced that black unemployment was at an all time low, the black caucus would have leapt to their feet and erupted into cheers.
Their silence last night proves that they do not hold black interests.

They are nothing more than slaves to the Democratic Party.

As CNN economic commentator and Heritage Foundation fellow Stephen Moore noted, from 2009 to 2015, “the incomes of black Americans fell by more than $900 per family adjusted for inflation.” Since then, “under Trump, median family incomes have risen by more than $1,000, according to Sentier Research and based on Census Bureau numbers. These numbers are not broken down by race, but it’s a pretty good bet that black incomes have risen with those of other races under Trump,” he added.

As for Owens, she wasn’t finished. She also came out in defense of black conservatives who are so often ridiculed and criticized for their political beliefs which differ from the majority of their community. “For too long, blacks that have been trying to help the black community have been labeled coons, while those that wish to destroy it have been celebrated as heroes,” she tweeted. “That chapter is coming to an end. BlackAmerica is on the brink of an ideological revolution. We can’t be stopped.”

Owens tweet storm came after cameras captured most Congressional Black Caucus members sitting expressionless and refusing to stand and clap when Trump mentioned the various accomplishments for their constituents under the Trump administration, the Western Journal reported.

The conservative Vlogger also launched into Democrats with other tweets, at one point warning that it isn’t just “radical islamists” who are threatening the United States.

“If you think radical islamists are the only threat to America, you must not be watching the #SOTU,” she tweeted. “Holy crap, Democrats.”

Sen. Joe Manchin, D-W.Va., who is up for reelection later this year in a state where Trump garners the most support of all the states, also criticized the caucus.

“I was very, very upset when I saw the Republicans never, ever stood up with Barack Obama, and there was things I didn’t agree about President Obama in his speech,” he said during an interview with MSNBC, according to the Western Journal.

“But I was taught in West Virginia there’s a little bit of respect, and you should show that. And I did that then, and I did it last night,” he continued. “I think the Democrats were wrong in not showing respect. That’s just me.”