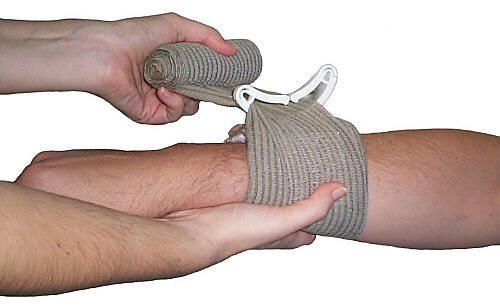 Considering the fact that bleeding is the largest direct cause of death in most fatalities, it makes sense to include something in your bug out bag that you can use to close up wounds if you happen to get injured while off the grid. But what types of bandages are most effective? Are there certain ways to apply bandages in order to stop the bleeding faster? The website BeansBulletsBandagesAndYou.com recently published an article addressing these questions and much more.

When it comes to treating wounds, one of the best tools in the prepping community is the Israeli bandage. As explained by BeansBulletsBandagesAndYou.com, “The underside of this bandage has a sterile pad. You’re looking at the top side, and the curved loop along the top is the ‘pressure bar.’” As for the rest of the compression bandage, it’s essentially like an Ace elastic wrap with a dealie on the end so that users can attach it to itself. After putting the sterile pad over the wound, wrap the bandage around and the loop it through the pressure bar. Once it’s pulled tight, wrap it around another time or two and then attach it to itself.

How tightly should I wrap the compression bandages?

The reason why compression bandages are typically a better choice than tourniquets is that the former allows blood to keep flowing to the rest of the limb while the latter does not. Israeli compression bandages do a good job when it comes to applying a significant amount of pressure to the wound and not as much pressure elsewhere. “If you pinch a toenail or fingernail on the bandaged limb and the other side, and it takes about equally long for the color to return to the nail bed on each side, that’s a good sign that you’re not suppressing blood flow to the bandaged limb,” BeansBulletsBandagesAndYou.com explains.

Are tourniquets ever okay to use?

If you have tried wrapping the wound with the compression bandage and it still won’t stop the bleeding, then use a tourniquet as a last resort. Tourniquets can cause tissue damage and may destroy vessels and nerves at the site of the application, but if your life is on the line when you’re in a real life survival situation, you will have no other choice.

In order to properly apply a tourniquet, place it between the wound and the body trunk roughly 2 to 4 inches away from the wound itself. Tie a half-knot, place a stick or a similar object on top of it, and then tie a full knot over it. Next, twist the stick until the tourniquet is wrapped tightly around the limb and the bleeding has stopped. You can then fasten it to the limb and then seek further medical treatment if its available.

While the Israelis do a great job, the compression bandage is not the only option you have. Chances are, you’ve come into contact with elastic adhesive bandaging at least once or twice in your life – The Red Cross uses them often at blood drives for those who leak a bit of blood. You stretch it as you wrap it around the wound and it sticks to itself, though it won’t stick to your skin. Elastic adhesive bandaging can be used to stop heavy bleeding as well – just be sure to pack a bunch of sterile gauze on the wound before wrapping it up.

Now you know not only which types of bandages are best for treating wounds, but also how to properly apply them to stop excessive bleeding. Anyone who is serious about prepping should definitely include either the Israeli compression bandage or the elastic adhesive bandage in their bug out bag – you never know when you will need them.