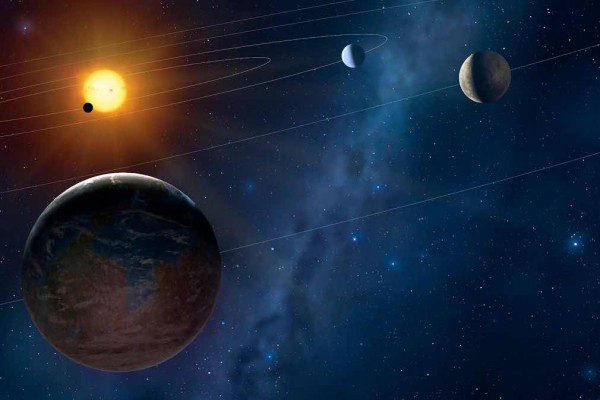 Scientists have found water in the atmosphere of a distant exoplanet known as WASP-39b.

Although its initial discovery was way back in 2011, little research has been directed towards the Saturn-sized extrasolar planet up until recently. The team who took the first in-depth look at WASP-39b collected data from various telescopes. Namely, the Hubble Space Telescope, the Spitzer Space Telescope, and the Very Large Telescope. From here they were able to create a complete spectrum of the planet’s atmosphere.

Analyzing the starlight that filtered through the atmosphere revealed the signature spectrum of water vapor. Going into this, the team was already expecting to find traces of water on the exoplanet. What they weren’t prepared for was massive amounts of water – three times that of Saturn.

These findings were especially surprising given the planetary conditions of WASP-39b, which is about 700 light-years away from Earth. Its distance from its parent star is more than 20 times closer than Earth is to the Sun. When you compare it to Mercury (the planet closest to our sun), WASP-39b is eight times closer to its star. Another intriguing feature of this exoplanet is that it’s tidally locked. This means that one side is always facing the star and reaching scorching temperatures of 1,430 degrees Fahrenheit. Winds blow the heat onto the other side of the planet, making it hot on both ends.

Yet despite these conditions, water exists in abundance. The presence of water points towards an intriguing possibility. Instead of developing near its star, WASP-39b came into being far away. Most likely in a corner of the universe awash with icy materials that fell onto its surface. And, during the course of its migration, it may have even crashed into other celestial objects.

Hannah Wakeford, the 2017 Giacconi Fellow at Space Telescope Science Institute, has stated that this exciting discovery has done more than shine light on an otherwise unknown extrasolar planet. It could help us better grasp the inner workings of our own cluster of planets.

“We need to look outward so we can understand our own solar system. But exoplanets are showing us that planet formation is more complicated and more confusing than we thought it was. And that’s fantastic,” explained Wakeford.

David Sing, Associate Professor in Astrophysics at the University of Exeter and Wakeford’s colleague, added: “WASP-39b shows exoplanets can have much different compositions than those of our solar system. Hopefully this diversity we see in exoplanets will give us clues in figuring out all the different ways a planet can form and evolve.” (Related: Beyond oxygen: Looking for possible alien life that may not require an atmosphere with oxygen.)

Moving forward, Wakeford has expressed an interest in utilizing the James Webb Telescope for more comprehensive examination of WASP-39b. “This spectrum is thus far the most beautiful example we have of what a clear exoplanet atmosphere looks like,” she said. However, more work has to be done. Gathering information on the exoplanet’s atmospheric carbon would put together a more complete picture of the planet’s history.

Remain up-to-date on all news about space exploration by going to Space.news.