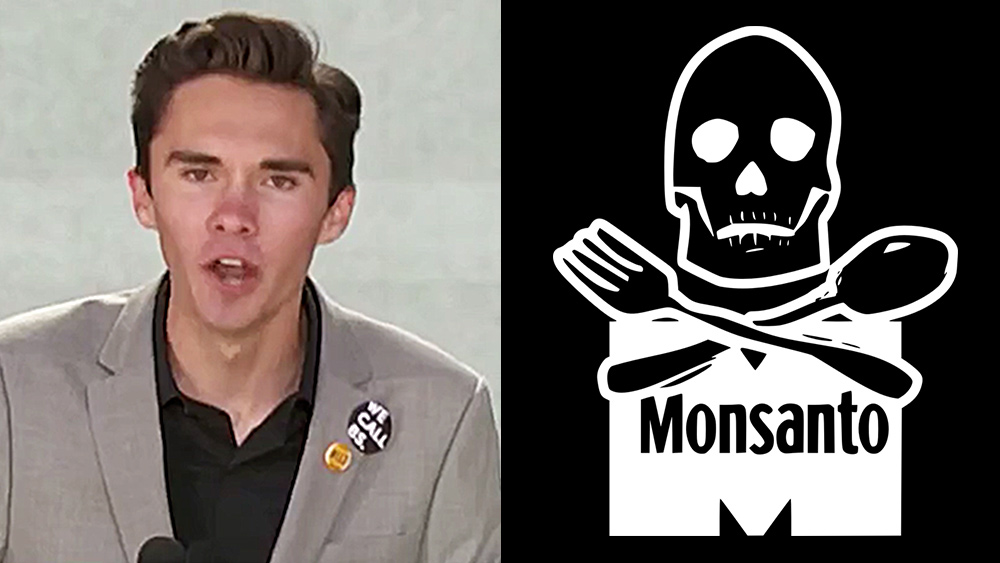 Aside from being the “Hitler Youth” fascist front man for the anti-liberty, anti-gun propagandists of the Left, David Hogg also aligns with Monsanto, one of the most evil corporations in the world. In a recent televised interview (see video clips, below), David Hogg claims that atrazine herbicide doesn’t cause hormone disruption, speaking in lockstep with Monsanto, the anti-science pesticide chemical giant that spends millions of dollars a year funding “black ops” character assassins to defame critics of GMOs, glyphosate and atrazine.

David Hogg, who has arisen as a “Hitler Youth” fascist who demands the government take away the rights of Americans because he feels personally angry, attacked Infowars’ Alex Jones during a recent C-Span interview, falsely claiming that atrazine herbicide chemicals have no effect on hormone disruption in humans. (Yes, C-Span is now allowing an 18-year-old high school non-graduate to lecture America on science, if you can believe that…)

During the Gun Policy & Safety segment on C-Span, Hogg stated:

For example, on InfoWars, one of his most famous statements is saying that tap water turns frogs gay, and it will turn you gay, too. First off, gay people are awesome, I don’t think that’s a problem at all…

The conversation went on to imply that Alex Jones must be insane for thinking that chemical contaminants in the water supply might alter sex hormone expression in mammals — even though this has been exhaustively documented throughout the scientific and medical literature.

Take a look at what the scientific literature actually says about atrazine and gay frogs, because you might just be shocked to learn this link has already been exhaustively proven. (Read Pesticides.news for more coverage of pesticide toxicity and water supply contamination.) 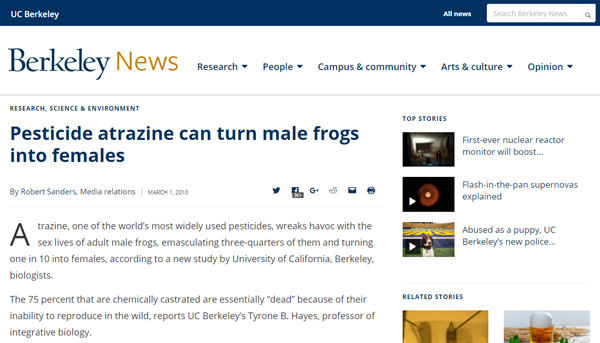 Atrazine, one of the world’s most widely used pesticides, wreaks havoc with the sex lives of adult male frogs, emasculating three-quarters of them and turning one in 10 into females, according to a new study by University of California, Berkeley, biologists.

The 75 percent that are chemically castrated are essentially “dead” because of their inability to reproduce in the wild, reports UC Berkeley’s Tyrone B. Hayes, professor of integrative biology.

Listen to Tyrone Hayes explain his findings, even as he is being attacked and defamed by both the pesticide companies and the radical anti-science Left: 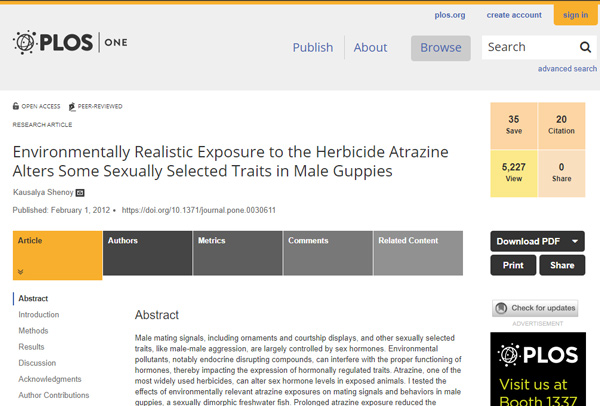 Male mating signals, including ornaments and courtship displays, and other sexually selected traits, like male-male aggression, are largely controlled by sex hormones. Environmental pollutants, notably endocrine disrupting compounds, can interfere with the proper functioning of hormones, thereby impacting the expression of hormonally regulated traits. Atrazine, one of the most widely used herbicides, can alter sex hormone levels in exposed animals. 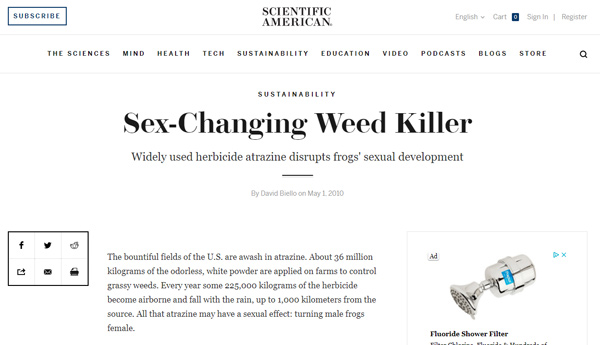 As described in the March 1 Proceedings of the National Academy of Sciences USA, biologist Tyrone Hayes of the University of California, Berkeley, and his colleagues exposed 40 African clawed frogs (Xenopus laevis) to 2.5 parts per billion (ppb) of atrazine continuously for three years—a level below the 3 ppb allowed in drinking water by the Environmental Protection Agency. As a result, 30 of the frogs were chemically castrated, incapable of reproducing, among other consequences. Also, four of the treated frogs actually turned female, going so far as to mate with other males and produce viable eggs despite being genetically male. Only six of the treated frogs resisted atrazine or at least showed normal sexual behavior. 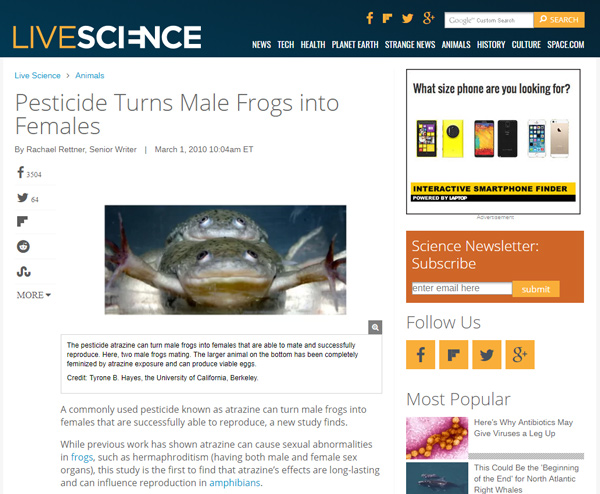 A commonly used pesticide known as atrazine can turn male frogs into females that are successfully able to reproduce, a new study finds.

While previous work has shown atrazine can cause sexual abnormalities in frogs, such as hermaphroditism (having both male and female sex organs), this study is the first to find that atrazine’s effects are long-lasting and can influence reproduction in amphibians.

Published in the National Library of Medicine, National Institutes of Health, June 5, 2014: 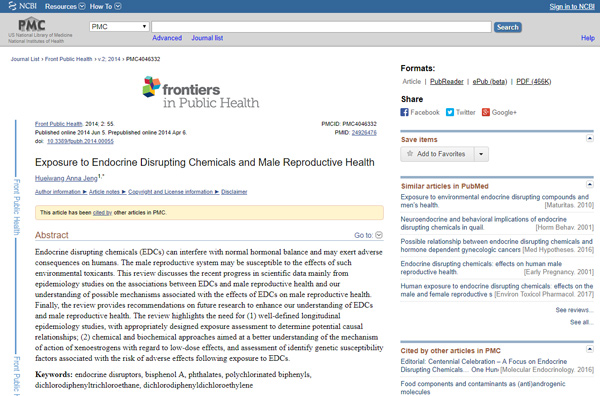 Endocrine disrupting chemicals (EDCs) are estrogen-like and/or anti-androgenic compounds that disrupt and interfere with the production, release, transport, metabolism, binding, or elimination of natural hormones in the body responsible for the maintenance of homeostasis and the regulation of developmental processes (1). EDCs include persistent pesticides and herbicides, methoxychlor, biocides, heat stabilizers, and chemical catalysts, plastic contaminants, pharmaceuticals, or dietary components.

…scientific researchers, and the general public have become increasingly concerned regarding the potential risk of EDCs to men’s reproductive health. Cellular models and animal toxicological studies have demonstrated that EDCs can exert adverse effects on the male reproductive system. 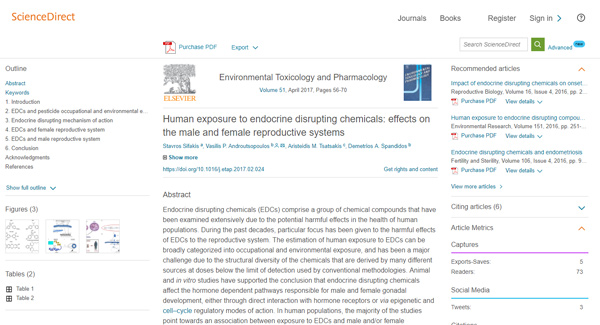 Animal and in vitro studies have supported the conclusion that endocrine disrupting chemicals affect the hormone dependent pathways responsible for male and female gonadal development, either through direct interaction with hormone receptors or via epigenetic and cell–cycle regulatory modes of action. In human populations, the majority of the studies point towards an association between exposure to EDCs and male and/or female reproduction system disorders, such as infertility, endometriosis, breast cancer, testicular cancer, poor sperm quality and/or function. 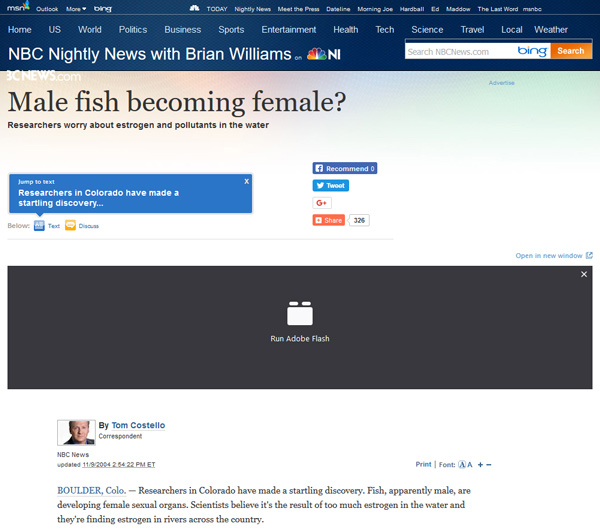 Researchers in Colorado have made a startling discovery. Fish, apparently male, are developing female sexual organs. Scientists believe it’s the result of too much estrogen in the water and they’re finding estrogen in rivers across the country.

“This fish has characteristics of both male and female,” says Dr. David O. Norris of the University of Colorado, Boulder. And scientists have found lots of them in three Colorado rivers, all of them downstream from sewage treatment plants.

Natural News: Chemicals in the water are turning male fish into females… is same thing happening in humans? 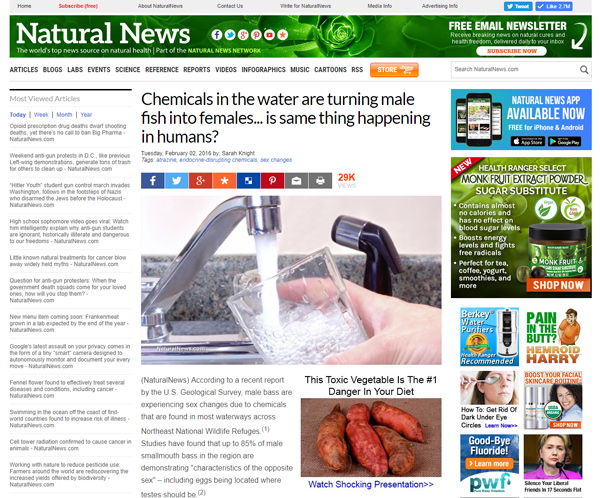 According to a recent report by the U.S. Geological Survey, male bass are experiencing sex changes due to chemicals that are found in most waterways across Northeast National Wildlife Refuges.(1) Studies have found that up to 85% of male smallmouth bass in the region are demonstrating “characteristics of the opposite sex” – including eggs being located where testes should be.(2)

This isn’t a one off – in fact, 27% of largemouth bass in the same region also show undesirable sex change indications. Meanwhile, an earlier report by Natural News states that tiny amounts of estrogen used in birth control pills is making its way into waterways and causing wild fish populations to collapse.(3)

It turns out Alex Jones is right, and David Hogg is scientifically illiterate

As you can see from the exhaustive scientific evidence shown above, Alex Jones is actually correct about atrazine herbicide chemicals (and other hormone disruptors), altering the sex / gender expression of amphibians. In layman’s terms, these chemicals “turn the friggin’ frogs gay.” And yes, these chemicals persist in the water supply and are present and easily detectable in municipal tap water, which means people are consuming them, too.

Importantly, these “gender bender” chemicals are able to alter sex expression in parts per billion concentrations, which is extremely tiny and well under the EPA’s allowable levels of such chemicals in the water supply.

Alex Jones knows more science on this subject than all the liberal media talking heads combined, in turns out. And David Hogg, not surprisingly, is an ignorant young man who absurdly believes that his personal anger makes him factually correct on any nonsense he manages to spout on TV. David Hogg is an arrogant, ignorant young fascist-in-training, and he didn’t learn any actual science in school, it turns out. They were apparently too busy indoctrinating him with “social justice” victimology skills rather than teaching him the truth about hormone disrupting chemicals in the water supply.

Here’s how Alex Jones responded to David Hogg’s complete science idiocy, which was of course NOT corrected by C-Span, CNN or anyone else on the Left, because they are also scientifically illiterate: