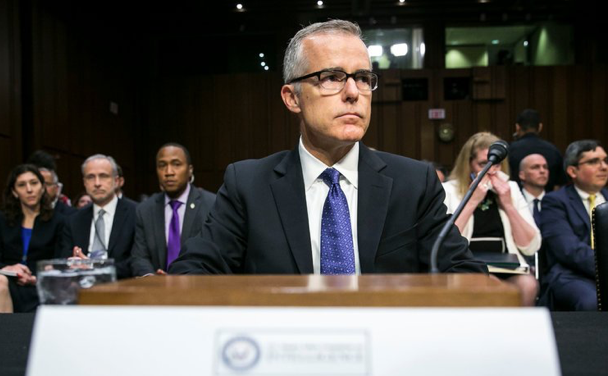 Just as special counsel Robert Mueller is beginning to squeeze anyone and everyone who got close or already was close to President Donald J. Trump as he launched his run for the Oval Office, the chief executive may be in a position to deliver some payback.

On Thursday Justice Department Inspector General Michael Horowitz’s office sent a criminal referral for fired FBI Deputy Director Andrew McCabe to the U.S. Attorney for the District of Columbia in what could be the first in a string of referrals, if the IG’s report over the bureau’s bungling of the Hillary Clinton investigation is as explosive as it’s believed to be.

CNN’s Pamela Browne was the first to report the news, according to a tweet sent by a colleague, Laura Jarrett.

The Justice Dept's Inspector General sent a criminal referral regarding Former FBI Deputy Director Andrew McCabe to the US attorney office in DC @PamelaBrownCNN reports acccording to source familiar; spox for McCabe, DOJ and US atty not commenting

The referral to the D.C. U.S. Attorney’s Office occurred some time ago, after the inspector general concluded McCabe had lied to investigators or his own boss, then-FBI Director James B. Comey, on four occasions, three of them under oath.

The U.S. Attorney’s Office met with McCabe’s legal team in recent weeks, though it was not immediately clear whether prosecutors there were conducting their own investigation or believed criminal charges are appropriate. A referral to federal prosecutors does not necessarily mean McCabe will be charged with a crime.

No, but it does mean that there could be criminal charges coming. And why not? As The National Sentinel reported April 14, the same IG recommended McCabe be fired — a recommendation that was accepted by Attorney General Jeff Sessions — for serious abuses of his office and for lying to federal agents on more than one occasion.

And let’s recall that Trump’s first national security advisor, Michael Flynn, was convicted and ruined for one count of lying to the FBI — during a meeting in which he thought he was discussing the president’s transition and in which agents who spoke to him even said they didn’t think he lied to them.

Legal experts have also opined that McCabe ought to be concerned about remaining free. George Washington University School of Law Professor Jonathan Turley said in a recent interview with CNN‘s Michael Smerconish that fired FBI Deputy Director Andrew McCabe has more to be concerned about than losing his pension. (Related: You have been warned: The civil war begins when Hillary Clinton gets indicted.)

Not only was his firing justified, Turley — not a conservative by any means — said, but McCabe should be grateful he’s yet to be charged criminally (though that might be about to change).

“It was justified in the sense that these were career officials — at the Office of Professional Responsibility — that made this recommendation, which is exceedingly rare,” Turley said.

“In fact, it’s unprecedented for someone in this position. These are not political appointees,” he added. “The OPR, quite frankly, is not viewed as a particularly aggressive office.”

“So, all of that makes this a relatively rare sanction coming from career officers,” Turley explained. “They clearly concluded that McCabe misled them and that he misled them on one of the core issues they were investigating, not a collateral issue.”

He added, prophetically: “What’s going to create an issue going forward is whether there will be a criminal referral. Michael Flynn was indicted for making a false statement to investigators.”

President Trump has been harangued by the Deep State since before he took office. Andrew McCabe was one of the swamp creatures who was involved in the plot to undermine and taint his presidency.

Let’s hope the president instructs his Justice Department to squeeze McCabe like Mueller is squeezing Trump’s associates and see who the former FBI official hands over.