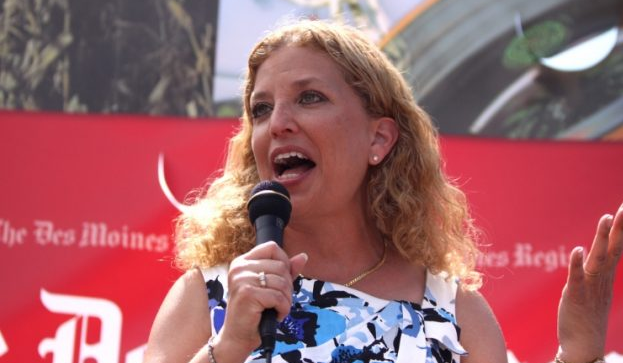 As you likely know, the Democratic National Committee filed what can only be called a desperation and harassment lawsuit in federal court in Manhattan on Friday against the Trump campaign organization, WikiLeaks, and (wait for it) Russia, over the bogus allegation that all of them “colluded” to “steal the election” from Hillary Clinton.

Without question, the lawsuit has no merit because it has no basis in reality. The reason why the DNC filed it was to keep alive the “collusion” story through the 2018 midterms so the party’s sycophantic supporters who continue to believe the lie will remain jazzed enough to vote.

But one person who you wouldn’t expect to be happy about the suit is ecstatic — and he just happens to be the current president of the United States.

Donald J. Trump tweeted out his response to the suit Friday night: “Just heard the Campaign was sued by the Obstructionist Democrats. This can be good news in that we will now counter for the DNC Server that they refused to give to the FBI, the Debbie Wasserman Schultz Servers and Documents held by the Pakistani mystery man and Clinton Emails.”

Just heard the Campaign was sued by the Obstructionist Democrats. This can be good news in that we will now counter for the DNC Server that they refused to give to the FBI, the Debbie Wasserman Schultz Servers and Documents held by the Pakistani mystery man and Clinton Emails.

Some of this needs unpacking, however, because Trump is referencing some things that the American Pravda media has been virtually silent about — the massive espionage scandal involving a family of Pakistani information technology specialists, Rep. Debbie Wasserman-Schultz, and a slew of other Democrats.

The one news source that has been tracking this scandal from the beginning is The Daily Caller, and it basically comes down to this, as summarized by Zero Hedge:

Imran Awan, his wife Hina Alvi and several other associates ran IT operations for at least 60 Congressional Democrats over the past decade, along with the House Democratic Caucus – giving them access to emails and computer data from around 800 lawmakers and staffers – including the highly classified materials reviewed by the House Intelligence Committee.

At one point a House Democratic Caucus server was stolen, but not before Iwan funneled information onto it for who knows how long. And the server just happened to disappear shortly after the House Inspector General concluded that the server was likely being used for nefarious purposes. As The DC noted, the Awans logged onto the server 27 times a day, on average — far more than any other server they managed. (Related: Two former IT aides to top Democrat Wasserman Schultz indicted on conspiracy charges.)

Then on Friday, The DC reported that Awan’s father, Rehman Malik, transferred a USB drive to Rehman Malik, the former head of a Pakistani intelligence agency (Malik denies the allegation).

Meanwhile, it’s worth noting that at the time the DNC claimed its servers were hacked by “Russia” — during the 2016 election cycle — the party refused cyber-forensic assistance from the FBI, which offered to help the DNC find out who actually hacked the server (if anyone — this is where the late DNC IT worker Seth Rich comes in). The DNC instead had a private forensic firm, Crowdstrike, look at its servers. Crowdstrike claimed it was the Russians but the firm’s findings have been disputed.

So, why is Trump so pleased by the DNC lawsuit? Because he’s most anxious for the discovery phase. In discovery, it’s possible that lawyers and investigators for the Trump campaign and other affected parties will be able to do something the FBI hasn’t been able to or shown interest in doing thus far: Accessing the DNC’s servers and other electronic information Democrats, Wasserman-Schultz (who tried to stymie the investigation into the Awans and the missing server) and other players in this scandal have.

By filing the suit, the DNC may have opened the door for Trump to expose another major Obama-era Democratic scandal and another aspect to the Russian collusion hoax.