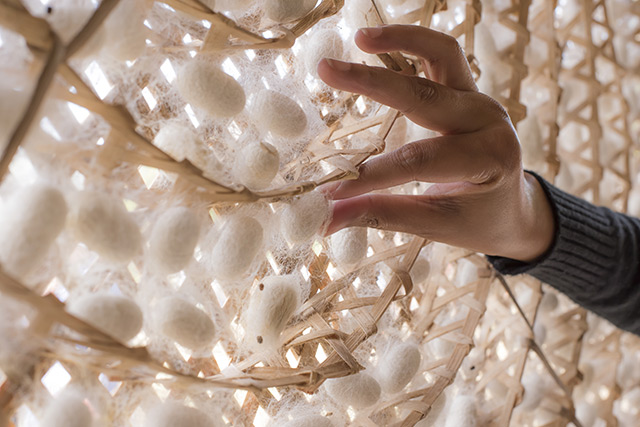 Far from just being a luxurious clothing material, silk could have numerous applications in engineering and biomedicine. This was the conclusion that an international team of multi-disciplinary scientists came to in their study, published in Nature Communications.

According to the investigators, the nano-architecture of silk makes it highly effective at causing “Anderson localization of light.” This phenomenon, named after the American physicist Philip Warren Anderson, describes how electron localization can occur in materials that have a certain amount of randomness in their nanostructure.

In the case of silk fibers, they have a multitude of “scattering centers” thanks to the size and composition of their nanofibrils. Silk fibers measure about 10 to 20 microns in diameter and house thousands upon thousands of nanofibrils that are about 100 nanometers in width, making every nanofibril thinner than a strand of human hair.

Being capable of confining light in such a manner gives silk a leg up over commercial optic fibers, which require special and meticulous engineering to achieve the same effect that silk does naturally. This causes such materials to be more difficult to produce on a larger scale. The unique nanostructure has silk also gives it greater efficiency in comparison other natural materials that possess similar attributes.

“We found that most transmission of light disappears in most of the silk surface. However, counter-intuitively, in a small area we found that the energy is confined, and this confined energy is transmitted through localized modes. The localized mode is a unique pathway for energy flow,” explained Young Kim, study author and associate professor in Purdue University’s Weldon School of Biomedical Engineering.

As such, one potential use for silk is in radiative heat transfer. An experiment with commonly used roofing materials like aluminum and black-painted aluminum demonstrated that silk both radiates heat and reflects solar light. Such an effect resulted in silk emitting more heat than it absorbs, causing it to be 10 degrees cooler than aluminum and making it adept at self-cooling.

“You may have heard that silk underwear can keep you cooler in summertime and warmer in winter. We have learned the basic mechanism behind this observation,” noted Kim. (Related: Bionic spider silk: Researchers have developed a super strong “biocomposite” with the potential to revolutionize numerous industries.)

He added: “Our findings could open up largely unexplored opportunities for engineering, energy, and biomedical areas. However, while direct applications could be possible, we want to learn from silk to help develop material synthesis and design processes in the future.”

Kim stated that their findings have “several implications and direct applications.” One is for imaging, wherein silk could be utilized as optical imaging fibers for looking into the human body with minimal side effects. Another is for nanomanufacturing; because silk normally comes from silkworms instead of being synthetically created in a lab, it can provide a more “scalable, sustainable, and eco-friendly” means of nanomanufacturing.

Visit FutureScienceNews.com to stay up to date on any future developments with silk.