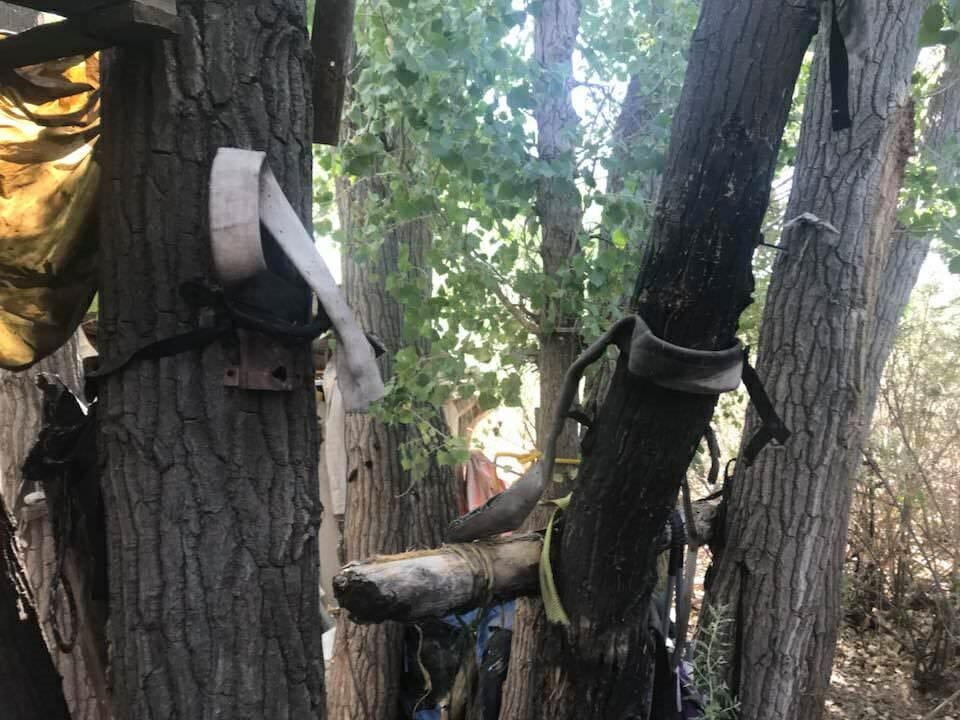 You may recall that in recent weeks news reports noted that Veterans on Patrol, a local advocacy group in the Tucson region that seeks out homeless veterans in washes and desert areas, found a strange encampment and concluded that it was being utilized by sex traffickers to exploit children.

The group posted photos and video online featuring straps attached to trees that they claimed were “restraints” used to assault children sexually.

In addition, the group noted that a small hastily-made shelter at the camp looked as though children had been held there against their will.

“Dear Cartel: You have entered our backyard & harmed our children. We are coming 4 U,” says a note taped by members of the group to a post at the campsite.

Some media outlets are skeptical of the claims, with InfoWars reporting, NO EVIDENCE TO SUPPORT CLAIM TUCSON HOMELESS CAMP A CHILD SEX DEN:

There’s nothing going on there. It’s a homeless camp with some evidence that may suggest illegal aliens with children have come through the area, which we already knew given that it’s near Tucson and other major migration points in the southwest.

But it’s not just local police saying that nothing’s there – President Trump’s own DHS, which has been massively busting up human trafficking rings all over the US, has investigated the homeless camp and said nothing is happening there.

SGT Report noted that a video posted by former Navy SEAL Craig Sawyer on Twitter purports to show a “holding cell” and other signs that children were being sexually exploited at the camp.

#Anon on 4Chan noted that veteran group investigators believe that the camp was being operated by four-to-six men “at any given time.”

“A cartel member responsible for the camp showed themselves earlier and attempted to scare us off the property despite having no legal right to do so,” #Anon posted. “Needless to say, it didn’t work. After it became clear to him how screwed he was, he disappeared on horseback into the Tohono O’odham [Native American] reservation.”

The post, which was featured by SGT Report, went on to note that local media was treating the find as though it were nothing. Indeed, a report from The Arizona Daily Star claims that police found no evidence to support the allegations when they went out to the site to investigate a few days ago:

Tucson police said they found no evidence of child sex-trafficking at a southwest-side homeless camp, which one veterans’ group claimed on social media was used to sexually exploit children. …

The camp, found in the brush on private property near West Valencia Road and Interstate 19, appears to be a shelter abandoned by homeless people, Tucson Police Department Sgt. Kimberly Bay said in a news release Monday evening.

In other reports, #Anon claims that those who have visited the site have found combs containing blonde hair along with boxes full of kids toys and condoms. (Related: WOW: Fox News’ Tucker Carlson posts ‘Never-Before-Seen’ CRIME STATS for ILLEGAL aliens.)

“We may have even found graves already (we stopped digging halfway when the smell got too bad),” #Anon wrote. “People are walking out of here traumatized by what they’ve seen.”

Craig “Sawman” Sawyer, a former U.S. Navy SEAL sniper and founder of Vets 4 Child Rescue, investigated the scene himself and said the media’s denial of what likely took place at the camp regarding children is baffling.

He noted that he and others found the bizarre tree restraints, an underground septic tank — a perfect place to keep children hidden from which they could not escape — dozens of boxes of hair dye, and sex lubricant to be indicative of more than just a homeless camp.

“It could have been a homeless camp, where the people were just weird or mentally ill. But there are a group of trees that look like rape trees,” Sawyer told The Hagmann Report on Monday. “Rape trees are essentially what the drug traffickers, coyotes, tend to want to use to rape people. They tie them to it and take their undergarments and hang them up on the trees as some sort of trophy. We found in this camp a group of trees with all manner of fire hoses nailed to them and loops and different straps and different types of rope.”

As The Gateway Pundit reported Monday, “The land on which the bunker was found is owned by Cemex Construction Materials South, LLLC., a multinational building materials company in Mexico and partner of the Clinton Global Initiative.”