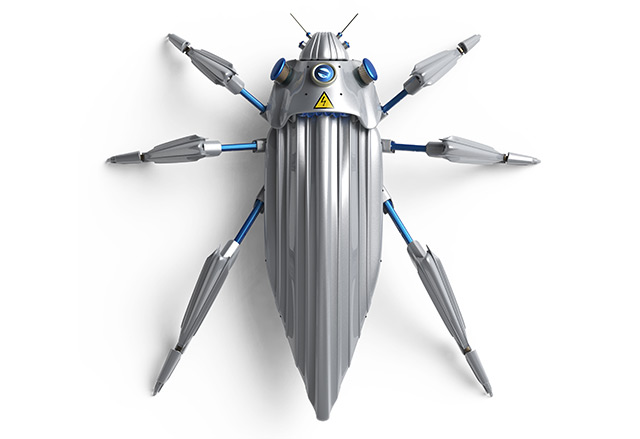 As if actual robots were not eerie enough, Singapore-based researchers reported their recent success at transforming beetles into “soft robots.” A Soft Robotics article detailed their method of planting artificial feedback devices on the backs of the insects, allowing them to assume direct control over the animals’ flight.

Theirs is the first study to report successful use of feedback controls to direct the movement of a free-flying insect.

Anyone who has watched a butterfly or been pestered by flies knows firsthand that flying insects can pull off incredible aerial acrobatics. They can fly rings around existing quadcopter drones with no effort whatsoever.

Most research efforts are therefore developing robots that can mimic the bodies and natural movement of live animals. An ongoing DARPA project, for instance, is looking into a bat-shaped flying drone that possesses the same level of aerial agility. (Related: Researchers develop tiny robot that moves like caterpillars and jellyfish, could be used for medical treatment inside the human body.)

The embedded proportional derivative (PD) backpacks turned the beetles into soft robots – or cyborgs, from another point of view. Indeed, study author Hirotaka Sato had previously worked on cyborg beetles for search-and-rescue purposes.

Wireless commands from the researchers triggered electrical stimulation of the beetles’ basalar and third axillary (3Ax) flight muscles. These 300 millisecond-long pulses of energy caused the insects to turn left or right during free flight.

The backpack also collected data on the acceleration of the beetle. These results were verified by a different set of calculations that used the flight trajectory of the beetle.

Furthermore, the NTU researchers performed a habituation test on the left 3Ax muscle and the right basalar muscle. At the same time as the habituation test, they also tested the robustness of the system over four consecutive days. Insects were stimulated 20 times on the first day, and eight times per day in the following days – a total of 44 stimulations.

In their study, they reported that electrical stimulations could induce the beetles to turn left or right during flight. However, their control was initially poor and got worse over time. Sometimes, the beetles even turned in the opposite direction.

The researchers believed this stemmed from the insects’ use of multiple muscles during flight, many of which were not being stimulated by the backpack. Beetles could compensate for artificially induced turns by using their other muscles to move in the opposite direction.

The results of this test led to the development of an optimized PD feedback controller. The NTU researchers set the stimulation period to be shorter and more frequent. They also arranged brief rest periods in between each stimulation, testing various lengths of time.

In addition, they stimulated both the 3Ax muscle and the basalar muscle on the opposite side to increase the turning force. Both muscles working together imparted much greater force than just one muscle.

Their improved PD controller worked as designed. They reported that the 150-millisecond-long stimulation separated by 200-millisecond periods achieved the best results at controlling the insects.