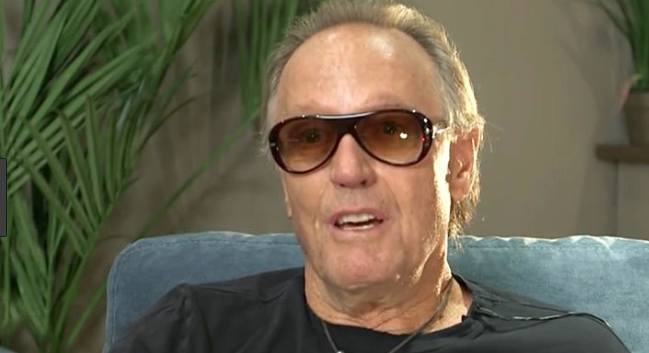 In recent weeks some on the Left have grown increasingly unhinged as President Donald Trump continues to bring America back from the edge of decline thanks to Barack Obama.

His successes are numerous — the economy is growing quickly, joblessness is at a record low, disability claims are falling now that employment opportunities are rising, and America is back on the global stage.

But each success brings new anguish and a rise in the level of pure rage and hatred for Trump, and of course, the Pravda media is out in front leading the way. You could even say the media is feeding the Trump haters and pushing them beyond the point of insanity.

That’s the only way to explain why a has-been, long-washed-up actor — Peter Fonda — would take to Twitter to threaten the first lady of the United States and her youngest child, and in the vilest way possible.

The text, sent very early Wednesday morning — which suggests Fonda may have been ‘under the influence’ of — something — said, in all caps, “We should rip Barron Trump from his mother’s arms and put him in a cage with pedophiles and see if mother will stand up against the giant a**hole she is married to. 90 million people in the streets on the same weekend in the country. F**k.

As reported by The Daily Caller, Fonda has been on a Twitter tirade lately:

He called for the public caging and rape of Department of Homeland Security Secretary Kristjen Nielsen in a tweet Tuesday. In the vulgar tweet, Fonda said “Kristjen Nielsen is a lying gash that should be put in a cage and poked at by passersby.” He continued, “The gash should be pilloried in Lafayette Square naked and whipped by passersby while being filmed for posterity.”

He also proposed via Twitter that White House Press Secretary Sarah Huckabee Sanders’ three children be kidnapped and then locked in a basement, referring to her using a very sexist slur (aren’t “progressives” supposed to be tolerant and lockstep backers of women?).

“SS is a lying gash, too. And ‘gash’ is much worse than c**t. Maybe we should take her children away and deport her to Arkansas, and giving up her children to Stephen Goebbels Miller for safe keeping,” he wrote.

Someone is going to get hurt — or killed

That he keeps referring to “we” is what’s troubling. More on that in a moment. (Related: Left-wing VIOLENCE has created a ‘new normal’ for GOP Congress: Dramatic increase in THREATS.)

The threat against the First Lady and Barron was too much. Melania’s spokeswoman, Stephanie Grisham, told The Daily Caller that the Secret Service has been “notified” of Fonda’s warped threat.

“The tweet was sick and irresponsible and USSS has been notified,” she said.

Meanwhile, DHS and the office of Sanders have yet to respond to media requests for comment.

As to Fonda’s “we” reference, you could chalk that up to the language of a coward requiring validation from a crowd for inferences and threats that he alone is making. Or you could view it as a call for assistance; a dog whistle to those on the Left who are already perpetually angry and ready to justify violence against a president whom they can’t stand and his family. And his administration.

The First Lady no doubt well understood that her life would forever change if her husband became president. We can only imagine the conversations that took place prior to POTUS announcing he would seek the GOP nomination in June 2015.

But she didn’t sign up for this kind of abuse.

It’s bad enough no one on the Left — Democrats, the Pravda media, the entertainment world — is criticizing Fonda for his rank vileness. What’s worse is that someone may act upon his threats.

Read more about the Left’s unending calls for violence at Violence.news.